Tandem has announced FDA approval of the t:slim G4, its touchscreen t:slim pump integrated with the Dexcom G4 transmitter. Patients can put in orders on Tandem’s website, and shipments have already begun.

The t:slim G4 is the same color touchscreen t:slim insulin pump that we first test drove back in 2012, but with the added ability to wirelessly receive CGM data directly from the Dexcom G4 Platinum transmitter. Like the Animas Vibe, Dexcom CGM data will now be right on the t:slim pump screen. Medtronic’s MiniMed 530G/Veo is the only other CGM- integrated pump available. 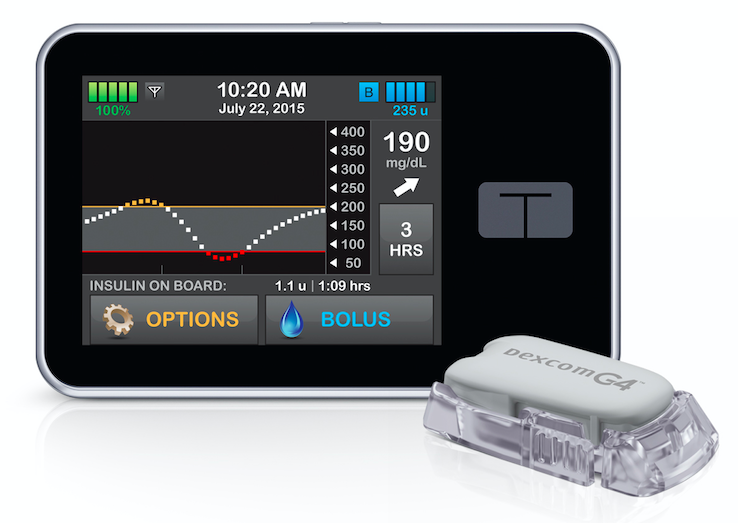 As expected, Tandem will not offer an upgrade program for those currently using a t:slim pump to get on the t:slim G4, as it would be too expensive for a young business like Tandem to do that. Current Tandem users interested in moving to the t:slim G4 will need to wait until their four-year pump warranty is up, though it’s been our experience that sometimes patients asking earlier can get it. The one exception is a free exchange option to get the t:slim G4 for anyone who bought a t:slim between August 1 and October 2.

The t:slim G4 is not compatible with Dexcom’s new G5 Bluetooth-enabled transmitter (launching this month), meaning patients have to decide how they want to see their CGM data:

Fortunately, future t:slim pumps will integrate with the Dexcom G5 and G6 CGM systems, with the ultimate goal of creating an automated insulin delivery system. No timeline has been given on these future integrations, and we imagine they are more than a year away.

It’s great to see Tandem and Dexcom working to make CGM better and expanding the convenience of seeing CGM data. We’re seeing this trend more and more in diabetes technology, and in this case it should lower the perceived hassle of wearing CGM. We believe many can benefit from the technology but haven’t yet tried it – we hope that those who used it and dropped it will give it another shot!