NeuroMetrix Quell: What Did People with Chronic Neuropathy Pain Say About the New Pain Relief Device? 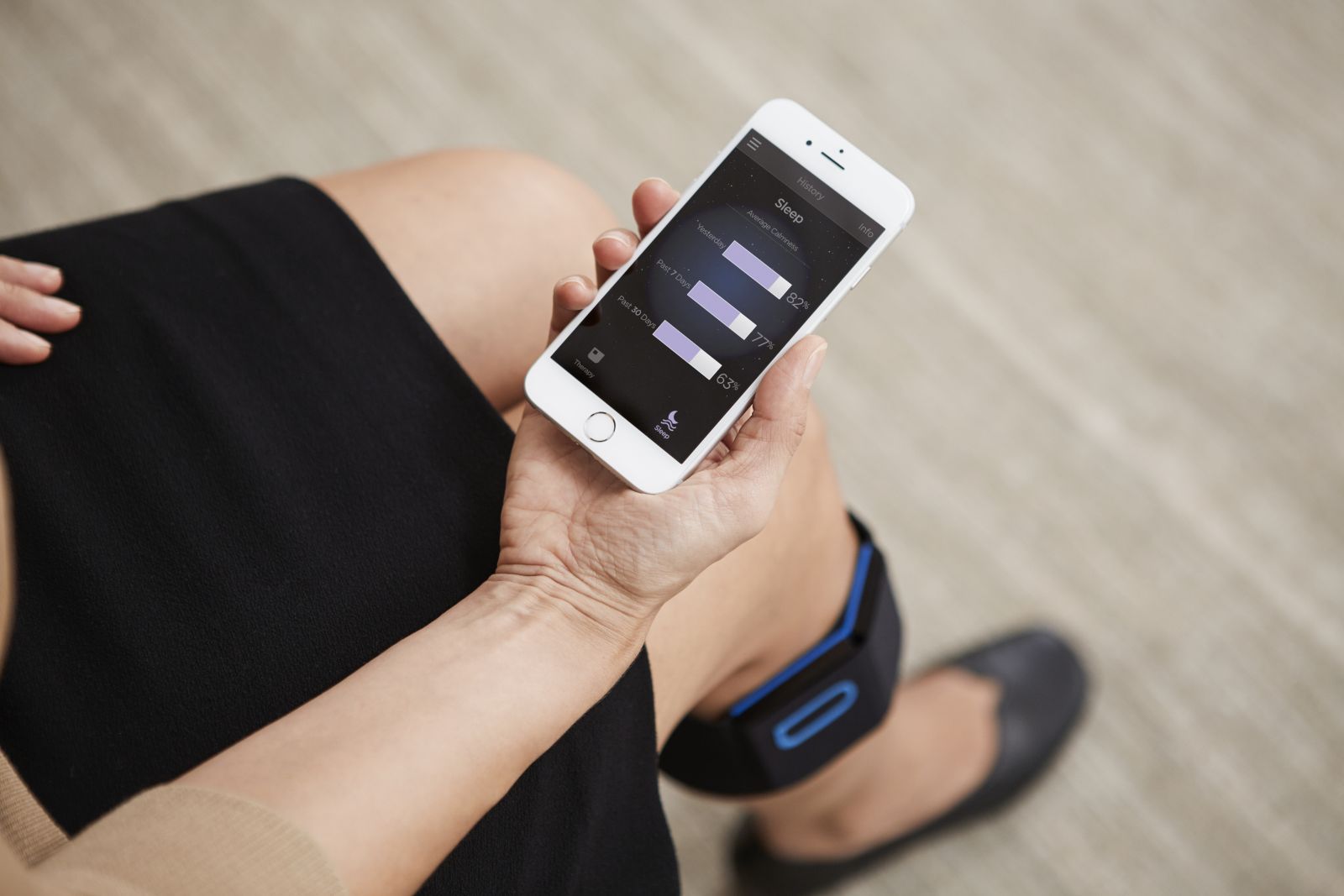 Twitter Summary: Five ppl w/ diabetic neuropathy test drive #Quell pain relief device – what did they like + how can it be made even better?

Since the launch of the Quell chronic pain management device this past summer, our team has been eager to learn about users’ real-world experience to treat the pain and discomfort associated with diabetic neuropathy. Thanks to help from the diabetes market research company dQ&A, we invited five volunteers with diabetic neuropathy or other forms of chronic pain to use the no-prescription-required (“over-the-counter”), FDA-cleared Quell device and app for two weeks. Read below for more information on Quell and what these five people had to say about it!

Bottom Line: Quell offers a potentially life-changing experience for people suffering from chronic pain. While the cost may be high for some ($249 upfront + $30 per month), we see it as a low-risk (there’s a money-back guarantee), high-reward opportunity to significantly improve quality of life for people living with often debilitating diabetic neuropathy. For sure, there will be some who experience no pain relief from Quell (~20% of people, according to NeuroMetrix), and others more who will find the burden of wearing the calf-worn device to outweigh the pain relief it provides. Still, chronic pain remains a major unmet need in diabetes, and many people have experienced very limited success from pain medications alone. We applaud NeuroMetrix for an innovative, effective, FDA-cleared product that clearly incorporated a lot of thinking on the patient experience.

Plus – fresh out of the Consumer Electronics Show – it was just announced that a second-generation version of Quell has received FDA clearance. This updated version contains advancements in tracking capabilities, an extended battery life of up to 25%, and more. It will be available in March of 2016 – more details below!

What is Quell and how much does it cost? 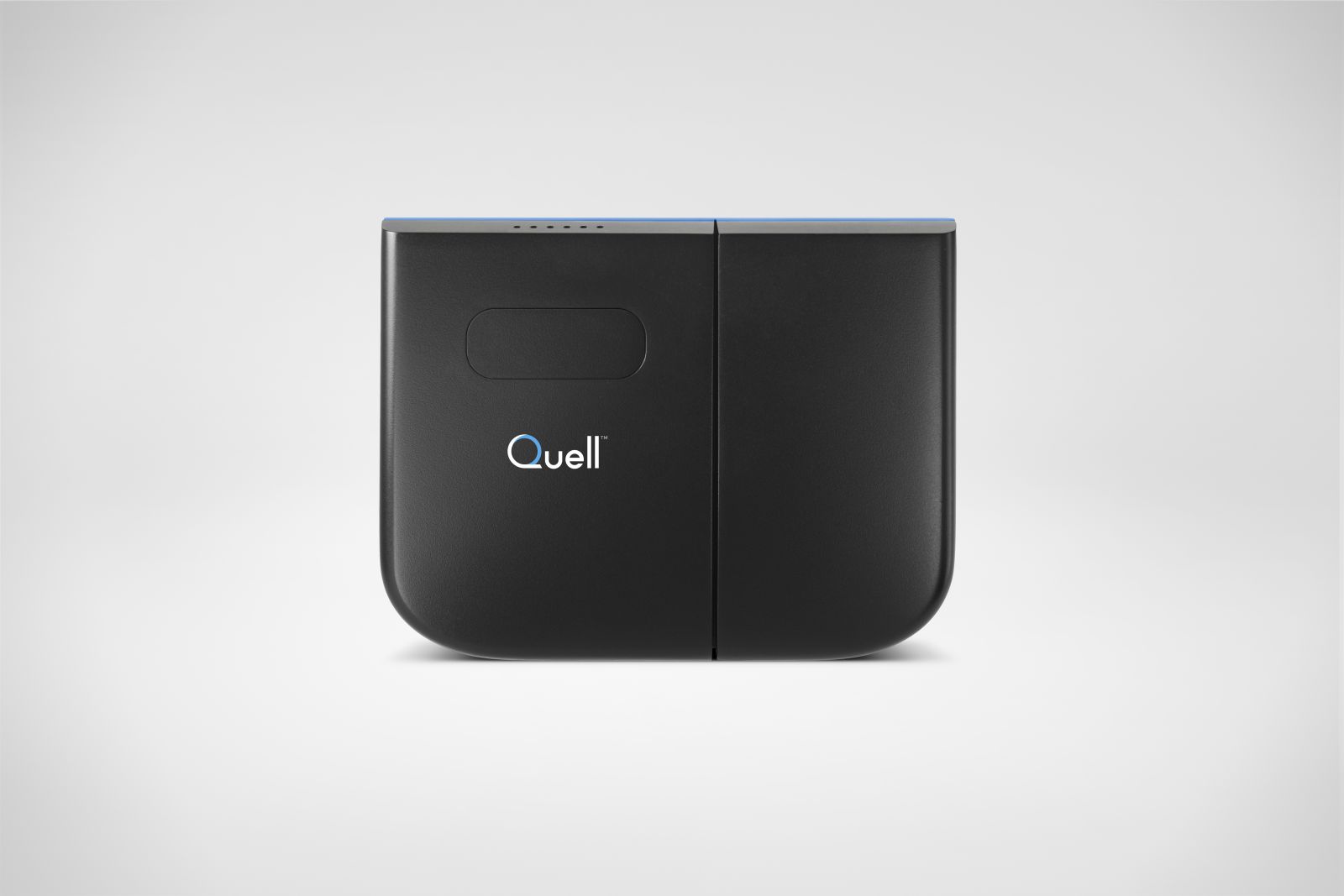 The Quell device is worn on the calf and uses nerve stimulation to treat multiple types of chronic pain, including diabetic neuropathy and fibromyalgia. The product is about the same thickness as an iPhone 5, is relatively lightweight, and its strap resembles a sports band that can easily be hidden under clothes. The device pairs with a free smartphone app for tracking and reminders. Quell stands out as one of the only FDA cleared non-drug therapies for chronic pain relief, eliminating many of the side effects that come with common pain medications.

Quell is available for purchase online here at $249 for the device “starter kit,” followed by $30 for each month’s worth of supplies. Quell is actually an “over-the-counter” version (no prescription needed) of the previous prescription-only NeuroMetrix device, Sensus.

Quell is worn in a strap that wraps around the upper calf, sending electrical pulses through the skin to the sensory nerves that in turn signal the brain to trigger the body’s natural pain relief response, blocking pain signals throughout the body. It is similar conceptually to TENS (transcutaneous electrical nerve stimulation), but developed in a wearable form and is more sophisticated, stronger, and optimized for diabetes nerve pain. It can be worn for long periods of time, including during sleep. While the device is worn around the leg, it can relieve chronic pain throughout the body (i.e., back pain, foot pain, etc.). It even works in both legs when worn on a single leg, and can be worn 24/7, if desired.

What is the Quell app?

The calf-worn Quell device is Bluetooth-connected to an optional smartphone app (both Apple and Android) that tracks the treatment time, battery life, and sleep quality. “Treatments” come in 60-minute on/off intervals, and the battery life display conveniently shows how many treatments are left (for example; 75% battery, 15 treatments). Quell can last for up to 40 hours before needing to be plugged in to recharge, though the average user gets around 30 hours of battery life – this comes out to about five days between charges on average. The device works without the app.

Who should consider Quell?

What features come in the upgraded version of Quell?

The upgraded Quell, available in March of 2016, comes with several updates geared at user convenience and data analysis. These include:

The updated Quell does not have any changes in effectiveness or physical design (i.e., same thickness, same strap, etc.). It will be priced the same as the previous Quell system, and NeuroMetrix is offering a free upgrade program for current users who send in their previous generation devices. 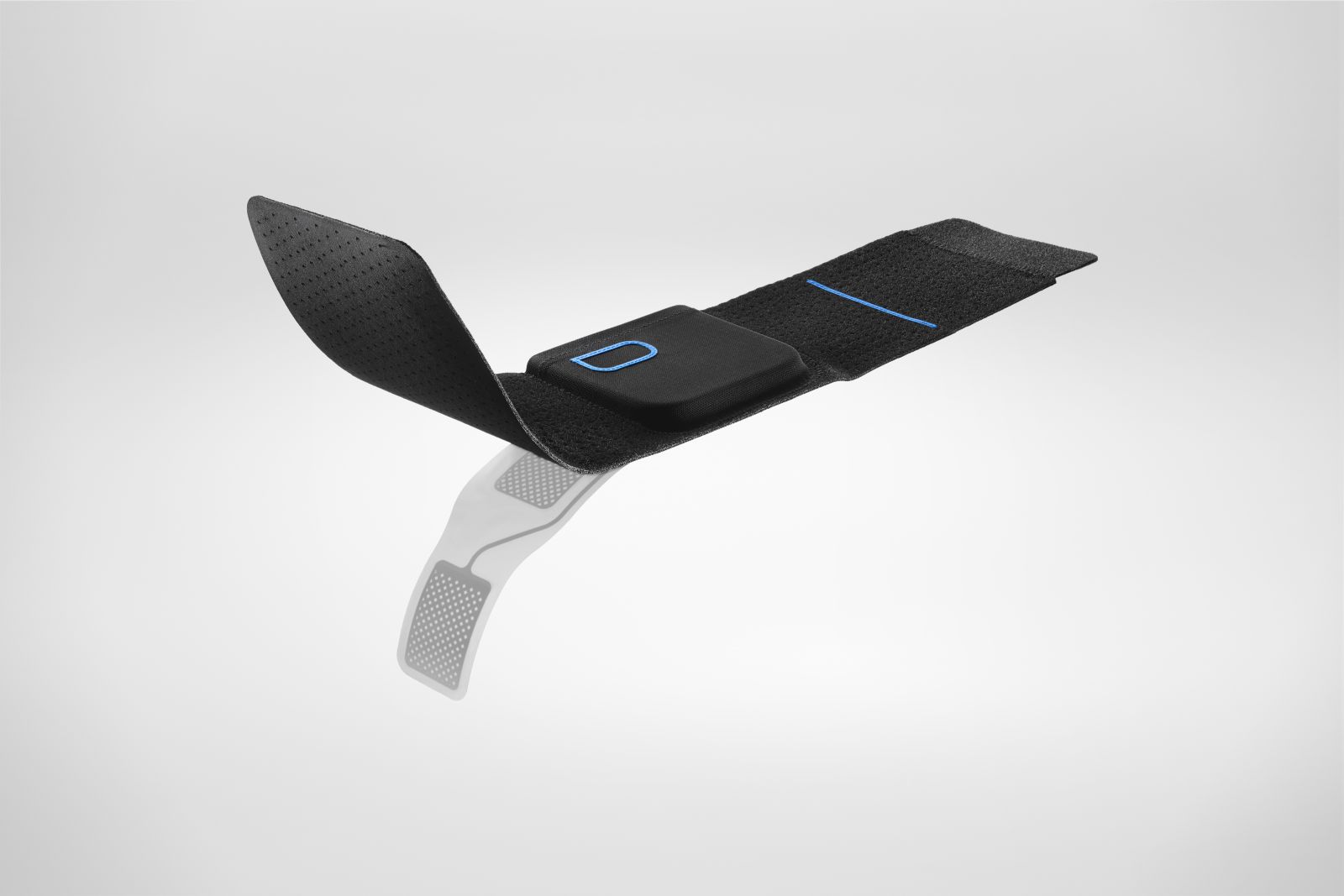 Our Quell test drive features five volunteers with diabetic neuropathy who used the Quell device for a two-week period. We thank these participants tremendously for working with us on this project and providing their personal insights on Quell!

Our test drive participants all had unique experiences with the device – some found that it could noticeably reduce their chronic pain, whereas others saw minor to no impact. This is to be expected, as the NeuroMetrix team explains that Quell is effective in about 80% of those who use it (consistent with our Test Drive, in which only one person reported no pain relief at all). We note that in some cases, users don’t experience the full benefits of Quell until after three to four weeks, so our Test Drive may not capture the absolute experience of using Quell in all participants.

We’re providing testimonials from the participants below, categorized by different aspects of the Quell experience: setting it up, experiencing pain relief, wearing the device, and using the mobile app. Additionally, we’ve summarized the experiences of the participants to give a more holistic view of each person’s test drive.

BETTY: Betty (55) has type 2 diabetes and has had chronic pain – including pain from diabetic neuropathy, back pain, arthritis, and fibromyalgia – for over 20 years now. Considering herself a “drug-free” person, she is strongly against using pills and other drugs to treat her own pain, fearing the negative side effects that can come with medications and the risk of becoming drug-dependent. She cited a past encounter with pain medications that caused her to feel “out of it” and overly tired for three days straight, preventing her from adequately monitoring and controlling her diabetes.

Betty rated her pain prior to using Quell as a 10 out of 10 (where 10 is unbearable pain), and found that Quell almost immediately brought relief down to a 1 out of 10.

She found the device simple to set-up and easy to wear, and was happy to find a non-medication solution to her chronic pain. To us, this is a testament to all the work put in by the NeuroMetrix team; they are working incredibly hard to bring relief to patients and a response like Betty. Even though not everyone has this response, if a sub-group of patients do, it’s a win.

VIRGINIA: Virginia (64) has type 2 diabetes and has been living with diabetic neuropathy for just over a decade. Prior to using Quell, she had been experiencing leg and foot pain, which she ranked from a 7-10 out of 10 (where 10 is unbearable pain).

Virginia experienced tremendous pain relief from Quell, which she emphasized only improved as she continued to wear it.

While she found electrode’s adhesion irritated her skin a bit, she found the device was also very easy to set up and was not cumbersome at all to wear. For her, the tradeoff was worth it.

BOB: Bob (61) has type 2 diabetes and been living with diabetic neuropathy for two to four years.

Bob experienced moderate pain relief from Quell (25-30% reduction, he claimed), though it was not as much as it could have been.

He said the instructions were a “breeze,” but found physically wearing it to be bothersome – particularly at night, and even stopped wearing it while he was sleeping after a few days into the test drive (though continued daytime wear).

MICHAEL: Michael (68) has type 2 diabetes and has had a history of chronic back pain, involving surgical interventions in the past, and also reported severe pins and needles pain in his hands. He has also previously had his right leg amputated.

While Michael found the Quell device a bit difficult to set up and wished for a longer battery life*, it led to significant pain relief. He also said he really enjoyed using the mobile app – it sounds easy and engaging from his report.

He was particularly satisfied with how it helped his hand pain, though it did lead to unexpected minor levels of elevated phantom pain in his phantom right limb.

*Editor’s note: the updated version of Quell will come with a 25% greater battery life.

Peta-Gaye: Peta-Gaye (35) has type 1 diabetes and has lived with diabetic neuropathy for 6-8 years now.

Peta-Gaye also found it difficult to set up Quell (though the mobile app helped), and unfortunately did not receive any pain relief from wearing Quell.

She even found it caused some added pain, which she described as “feeling like it was pulling at my [nonexistent] leg hair” when wearing the device. As such, she stopped using Quell after one week. She also found it a bit clunky to wear, but said that if it caused significant pain relief, the burden of wearing it would have been worth it. We found this interesting, and believe making for an easier set-up seems possible. 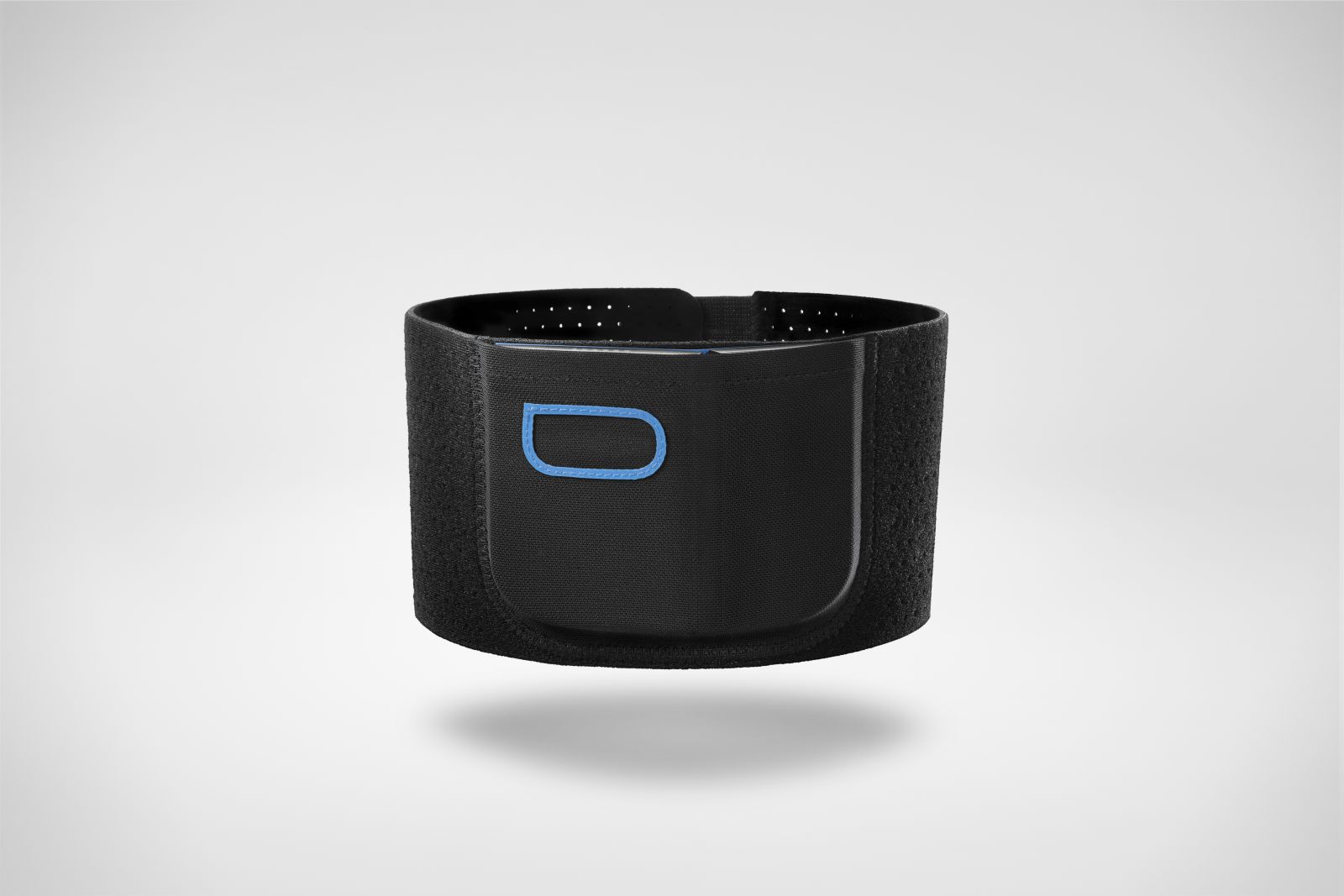 Bottom Line: Overall, Quell was simple to set up for most (but not all) participants, coming with clear instructions and easy-to-assemble parts. Those who used the mobile app said it made the process much easier than without it.

Bottom Line: While for most, the Quell device led to reductions in nerve pain, it had minor to no effect on others. Additionally, Quell’s impact on pain relief seemed to be very treatment-dependent. Rather than providing continuous pain relief throughout the day, participants noted that the pain relief was stronger when it was actively giving a treatment and weaker (or non-existent) when it was off-cycle. This is to be expected given the device’s mechanism of action: nerve stimulation is mostly effective when active and for 30-60 minutes after. Over a longer period of time, it may decrease the sensation of chronic pain more broadly, though this would not be captured in our two-week Test Drive.

We believe the company’s claim that Quell offers some relief for ~80% of wearers. But unfortunately, as with pain medications as well, it seems challenging to predict ahead of time whether or not Quell will work for any given person. NeuroMetrix offers a 60-day money back guarantee on all Quell purchases, so anyone who does not experience adequate pain relief from using Quell can return it for free. NeuroMetrix management told us that they are studying user data to try and build predictive analytics in the future.

Bottom Line: It takes a while to get used to wearing Quell on the calf, but it seemed to feel less bothersome over time for most people. It was less noticeable during the daytime, and can be easily hidden beneath clothing. At night, though, more people found it bothersome to wear. Moreover, the electrode-adhesive pulled at some peoples’ skin a bit, particularly when walking or moving.

Bottom Line: Users agreed, downloading the mobile app enhanced the experience of using Quell and made it simpler to track treatments and battery life.