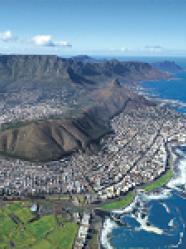 This winter we flew down to sunny Cape Town to attend the nineteenth official meeting of International Diabetes Federation (IDF). This conference, held only once every three years, drew over 12,000 clinicians, scientists, and other attendees. Diabetes isn't easy for anyone to live with, but this meeting reminded us of how lucky we are, in the US, who have health insurance and access to the drugs and devices that make such a difference.

diabetes is an international epidemic.

Diabetes is a global epidemic, but its greatest impact right now is in fast-growing, developing countries - the most prominent being China and India, which have more diabetic patients than any other countries in the world. About 180 million people have diabetes worldwide, a number expected to at least double by 2030, according to the World Health Organization. China had about 21 million people with diabetes in 2000 (so, likely a few million more now), which is also expected to double by 2030. India had about 32 million people with diabetes in 2000 and is expected to have 80 million (much more than double!) by 2030. These numbers compare to 15 million in the US, a number we typically perceive as sky-high. This crisis reflects these countries' emerging, industrialized economies, which are bringing increased affluence but also the dark side of prosperity: sedentary lifestyles, high-caloric Western diets, and obesity.

highlight on diabetes in children.

In poor countries, children with diabetes are often not diagnosed until long after onset. Some die for want of a diagnosis, while others who are saved have severely shortened lives because insulin is too expensive or simply unavailable. Leading pediatric diabetes specialists Dr. Francine Kaufman and Dr. Henk-Jan Aanstoot spoke about the IDF theme for 2007: diabetes in children. We hope that passage of the UN Resolution for Diabetes will bring greater attention to this troubling area.

obesity is not the only cause of metabolic syndrome.

While obesity, especially central obesity (fat around the stomach), undoubtedly has a role in the development of type 2 diabetes, many other factors contribute. Family history plays a big role in susceptibility to metabolic syndrome and diabetes. We also heard doctors talk about how stressful modern lifestyles and environments can activate our inflammatory responses to cause insulin resistance. Insulin resistance is one of the two "dual defects" of type 2 diabetes - the first defect is insulin secretion. In plain English, this means that type 2 patients tend to have two problems - one relates to insulin resistance and usually happens first; this means insulin can't be properly or optimally processed. The second problem comes when the body has problems with insulin secretion; it doesn't, in other words, produce enough. Obesity exacerbates both defects, so with the type 2 epidemic, it wasn't a surprise to see such a big focus on obesity. After all, it is said that if excess weight (being overweight or obese) disappeared, over 80% of type 2 diabetes would disappear.

Obesity and metabolic syndrome affect ethnic groups differently. . Asians generally have more visceral fat ('bad' fat) than Caucasians, Africans, and Hispanics with the same BMI. Because visceral fat is associated with insulin resistance, this means that Asians tend to have a higher risk of developing diabetes at lower body weights. Asians are also more genetically prone to lose beta cell function, the other contributing factor in type 2 diabetes. The bottom line, though, is that people of every nationality, race, religion, age, and creed are increasingly at risk for diabetes as modern lifestyles - too much food, too little exercise - spread throughout the world.

The results were released from a big study called "ADOPT," which highlighted the fact that several common diabetes drugs stop working after a few years. The trial was designed to compare a thiazolidinedione (TZD), a sulfonylurea (SU), and metformin, when each was used by itself as the initial treatment in people with type 2. Though none of them performed outstandingly, the TZD did the best, followed closely by metformin and trailed at a distance by the SU. At four years, 40% of people on the TZD were at target A1c (below 7%), while 36% of people on metformin were at target, and only 26% of people on the SU were at target. The study confirmed what doctors generally know by now - that "monotherapy," or taking only one diabetes drug, does not really work. "Combination therapy," or taking more than one drug, seems much more effective. It produces fewer side effects as well - less weight gain on TZDs, fewer gastrointestinal side effects on metformin, and less hypoglycemia on SUs - because each drug does not need to be at its maximum dose.