2020 Health Plans Give People Access to as Much Insulin as They Need: Cigna, BCBS MN, Medica MN, UCare MN 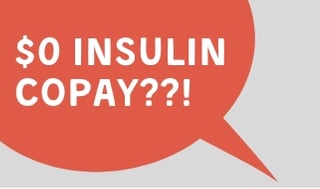 In a win for insulin affordability, insurance companies are starting to launch policies that cap monthly out-of-pocket expenses to make sure that people can afford as much insulin as they need.

In April, Cigna’s Express Scripts announced a Patient Assurance Program that will limit insulin co-pays to $25 per month, regardless of how much insulin a person needs to take. More than 1.4 million people use Express Scripts to cover their insulin, so this is a big deal. Members of Cigna and Express Scripts can expect this program by the beginning of 2020. It will include short-acting and basal insulins made by Lilly, Novo Nordisk, and Sanofi, though the product list isn’t yet available.

Three insurance companies in Minnesota have taken similar actions. Blue Cross and Blue Shield (BCBS) of Minnesota just announced that members of fully-insured health plans (BCBS pays for all health costs after collecting a premium fee) will pay $0 when they get insulin at the pharmacy, starting in January 2020. The no-copay will apply to families and individuals, through both small and large employers, but not to people covered by self-insured plans (the employer pays for all health costs for its employees).

The BCBS plan is especially important for people who don’t get insurance from their employer and instead buy insurance through the public marketplace. Dr. Craig Samitt, the president and CEO of Blue Cross Minnesota explained, “We felt a responsibility to address the skyrocketing cost of insulin with the options we have available. Hopefully our action will provide some measure of financial relief to many of our members who live with diabetes.”

Two other Minnesota programs – Medica and UCare – are starting a $25 per month insulin copay cap in 2020. These two programs are also relevant to people who buy insurance through the public marketplace.

In May, the state of Colorado passed a law limiting insulin copays to $100 per month for all people living in the state with insurance. The law says that one in four people with diabetes use less insulin than they need due to its high cost. Colorado insurance companies will absorb any additional costs of insulin.

Hopefully these programs will continue to extend across the United States to reduce out-of-pocket payments and enable insulin for all.

Do you need help paying for insulin? If so, check out our resource page on affordable insulin.