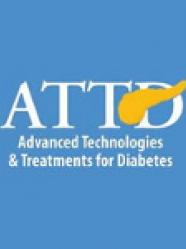 This year, as usual, ATTD brought an exceptional group of researchers, covering topics ranging from insulin pump therapy and hospital glucose management to information technology and novel insulins. We noticed a specific emphasis on CGM, with additional data documenting the benefits of CGM and with previews of several novel products in development. In addition, many new “patch pumps” that will serve a wide range of people with various pump preferences are on the horizon. On a more sobering note, as the FDA continues to delay approvals, it became readily apparent that Europe will consistently see the introduction of new devices sooner than the US.

The conference featured lengthy discussions about the development of next-generation CGM devices and the benefits of continuous glucose monitoring. In particular, we were excited to see previews of two new CGM products in development: Medtronic’s next-generation Enlite sensor and Bayer’s unnamed CGM (for a full analysis of these devices, see this month’s New Now Next). The Enlite will represent considerable improvements over the previous Medtronic sensor, and the Bayer CGM promises to bring innovations in data uploading and overall usability when launched (no dates yet). On the academic research side, Dr. John Pickup presented an analysis of multiple clinical trials evaluating the safety and effectiveness of CGM. After combining data from six recent studies, he found that CGM users benefit not only from an extra 0.3% reduction in A1c but also from a 23% reduction in hypoglycemia (defined as blood glucose readings under 70 mg/dl). Also, Dr. Tadej Battelino announced newly published clinical trial data that demonstrated the potential for CGM to lower overall hypoglycemia and nocturnal hypoglycemia. Nearly all CGM studies have shown that the benefit derived from CGM is strongly correlated with how frequently people wear the device (i.e., those who wear the device more days per week, on average, tend to benefit much more than those who wear the device fewer days per week).

At ATTD, we heard a good deal about “patch” pumps in development – these pumps are typically disposable, attach directly to the body, and lack tubing (the only current patch pump is Insulet’s OmniPod). Most notably, Israel-based D. Medical unveiled its new patch pump, dubbed the Spring Hybrid. This device can be worn either like a patch pump, directly on the body, or like a traditional pump, with an infusion set attached to the body. The watertight product also includes a separate wireless controller (with an integrated blood glucose meter) as well as the option to deliver boluses using the pump itself. The Spring Hybrid technology (previously known as Nilipatch) is already approved in Europe and is scheduled to be submitted to the FDA later this year. Another highlight of the meeting was our first look at the Animas/Dexcom combined pump and CGM system, called the Animas Vibe. Displayed at the Animas exhibit hall booth, the pump itself will be very similar to the one used in the Animas Ping (though ever so slightly longer to incorporate a CGM receiver). The Vibe will use Dexcom’s fourth-generation sensor, which (as we wrote in New Now Next in diaTribe #29) will be significantly smaller and more accurate than the SEVEN PLUS.

The meeting also prominently featured the artificial pancreas (also known as the “closed-loop”). As we’ve written about in Conference Pearls in diaTribe #11 and Conference Pearls in diaTribe #28, the basic idea of the artificial pancreas is a computerized system that uses devices to maintain blood sugars at a healthy level, without any user input. Such a “closed-loop” system would involve a CGM (to measure glucose levels), a software algorithm (to analyze the data and estimate the amount of insulin needed), and an insulin pump (to deliver the appropriate dose of insulin calculated by the algorithm). While there were no major updates on the artificial pancreas, we certainly saw very strong continued interest in advancing the field. We found B. Braun’s in-hospital system, called the Space GlucoseControl (GC), to be a notable example of progress toward closing the loop. The Space GC automatically adjusts insulin doses based on blood glucose readings (measured by nurses) and infusions of carbohydrates; recent trials have shown that it can maintain people with diabetes in the “target zone” for roughly 60% of the time with no hypoglycemia. While the system is only available in hospitals in Europe, we hope to hear of clinical trials testing artificial pancreas systems in real-world settings potentially outside of the hospital.

While we typically focus on products on the market or in late stages of development, we couldn’t resist reporting on some exciting early-stage technologies that were presented at the meeting. For example, when insulin is injected, it takes time to absorb into the bloodstream, where it acts to reduce blood sugar. Reducing the absorption time (i.e., increasing the speed of) insulin is a major focus of research, especially with insulin pumps. The highly-regarded Dr. Sanjoy Dutta of JDRF and Dr. Eda Cengiz of Yale presented data on InsuLine’s InsuPatch, a thermal patch that applies controlled heat around the infusion site in order to increase the speed of insulin absorption. In a small study, the InsuPatch demonstrated a 36-minute advantage over traditional pumps in the time it took for the insulin to fully absorb into the bloodstream. We’ll be excited to write about this, in time, in diaTribe’s Test Drive. We’ll also be keeping a close eye on other early-stage trials mentioned at ATTD, including studies of leptin (a hormone involved in weight control) in type 1 diabetes (run by Amylin and JDRF), and Oramed’s orally delivered mealtime insulin.