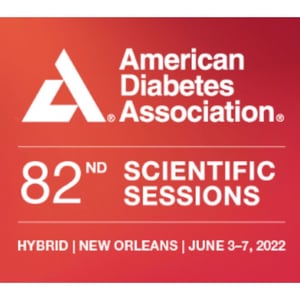 Amber Clour, who has type 1 diabetes, is the founder of Diabetes Daily Grind and host of the podcast Real Life Diabetes. She shares her experience attending the 2022 American Diabetes Association Scientific Sessions in New Orleans.

I’m no newbie to diabetes-related events and conferences, but attending the 82nd American Diabetes Association (ADA) gathering last week in New Orleans was a first for me. I head into every diabetes forum with an open mind and general curiosity about new devices, medications and services that will make life with diabetes just a little bit easier.

I began blogging about life with type 1 diabetes in 2014 when I founded the Diabetes Daily Grind and Real Life Diabetes Podcast. At first, I was reluctant to share my story and thought, “Who would even care?” But I was wrong. People living with diabetes liked my blogs and those in the medical community found it valuable because they got an inside look as to what “we” were thinking.

I would like to believe this has helped guide healthcare providers’ daily practice and encouraged them to have compassion when interacting with their patients.

Attending the ADA conference last week wasn’t of much interest to my usual audience, as my readers and listeners tend to enjoy hearing stories from people living with diabetes. But the research and scientific discoveries on display at ADA were fascinating to me. This year I attended on behalf of my latest project, The Diabetes Way, with The Diabetes Way CEO, David Kliff.

People living with diabetes often hear about the latest drug or gadget via various marketing efforts, but learning about it firsthand by those doing the research gives me hope for the future and, at the same time, reminds me how slow the progress can be. For this very reason, I wanted to capture more detailed information about the process, how and why FDA approval can be so elusive and expensive, and what drives researchers to continue their work.

I began my ADA journey with a few goals:

I knew the conference would be a large one, but I was not prepared for the actual scale of the event and overall attendance, even though this year’s turnout was down due to COVID. As I entered the conference center, I was flooded with diabetes advertising materials, posters, videos, etc. The conference halls were packed, and I enjoyed hearing passionate discussions in various languages.

The scale of the convention center and the 6,600+ attendees were overwhelming. Once I acquired my press credentials I headed downstairs to the exhibit hall. I picked up on the social media promoted ads, TV commercials, and magazine spreads, but seeing the room light up with booths built with all of the lights, bells and whistles was impressive.

Stop #1 in the exhibit hall was with Dexcom, which I have used for years. I had an enlightening discussion with the International team and learned a great deal about Dexcom ONE. As a diabetes advocate, I find it interesting to hear about new devices and medications, and when they’ll be available on a global scale.

The latest generation of Dexcom CGMs. 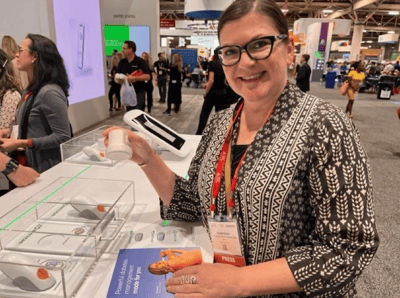 I was thrilled to get my hands on the upcoming Dexcom G7, which includes a more user-friendly and less invasive inserter device than G6, among many other new features.

Stop #2 was the MannKind booth to talk about Afrezza, an ultra rapid-acting mealtime insulin that is breathed through your mouth and into your lungs, using an inhaler.  I’ve used Afrezza on and off for years and wanted to see what was on the horizon.

I spoke with MannKind's CEO Michael Castagna and Executive Director of Marketing Ben Harris and tried a demo of the BluHale® PRO, a small electro-acoustic device that snaps onto the dry powder inhaler and tracks the amount of insulin taken. It also shows your capability to quickly and accurately dose the insulin by inhaling. The data provided reminded me of a CGM and insulin pen cap apps. We had a good laugh because, according to the device, apparently I need to up my inhaling insulin game.

At the MannKind booth with CEO Michael Castagna.

Stop #3 was with my friends at Bigfoot Biomedical. As someone who still uses MDI insulin therapy, I’ve kept a close eye on this company’s progress and had the privilege of interviewing the Chief Medical Officer, Dr. James Malone, in May 2021. Much like the BluHale® PRO, Bigfoot Unity™ Diabetes Management System incorporates integrated continuous glucose monitor (iCGM) data for people with diabetes who use multiple daily injections (MDI) of insulin.

I made the most of my time in the exhibitor hall, which felt like I was in a diabetes Vegas casino – shiny things, lots of people from across the globe, bright lights and a lot of marketing money being spent while selling expensive diabetes management tools.

I did present a few questions to representatives at each booth when time allowed.

I asked these particular questions because unless the public is aware of the developments and the medical team takes time to learn about them, the progress is dead in the water. I take it as my responsibility to research what’s available and to share what I foresee my diabetes management will be with my medical team.

My consensus from these three booths is that these companies are all interested in finding more ways to educate the public and the medical community. This isn’t easy, or cheap, and these companies are working hard to get their product on the market. Affordability is a whole other issue and not one easily resolved.

The number one thought I had leaving New Orleans was how many of the exhibit vendors work together to provide better diabetes management tools. I also wondered how many attendees at ADA actually had diabetes? I saw a pod or CGM on a few folks, but the majority of attendees were people either doing research in diabetes or working within the industry and not living with the disease. I was grateful to see so many passionate people working diligently to make tomorrow better than today for so many of us with diabetes.

Amber Clour
Amber Clour lives her life according to the principle of ‘service over self’ as host of the Real Life Diabetes Podcast and co-founder of DiabetesDailyGrind.com and The Diabetes Way .... Read the full bio »