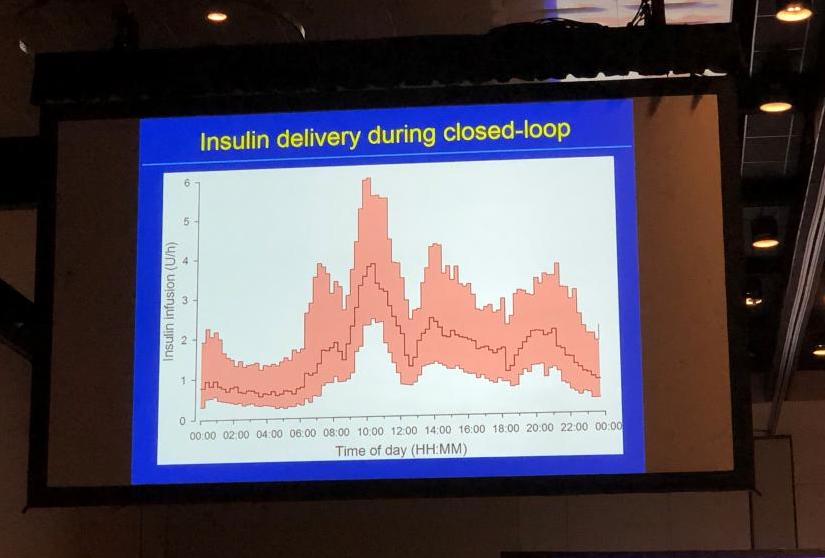 U500 insulin delivery through Omnipod pump, comparing insulin secretion between Mediterranean and ketogenic meals, a head-to-head with Afrezza and NovoLog, Qtern combination therapy results, and more!

The volume of information that comes out of the ADA Scientific Sessions can be daunting, but we’ve identified a few more highlights-worthy pieces.

In the first-ever study of U500 (more concentrated) insulin administered via pump, researchers found that people with type 2 diabetes getting high daily doses of insulin through the Omnipod reduced their A1C’s by an average of 0.4% more than those who continued multiple daily injections (MDI). Additionally, people on MDI had to increase their total daily dose of insulin by about 50 units during the 26-week trial, while Omnipod users did not. While people using the Omnipod had more nighttime hypoglycemia statistically-speaking, it is likely not clinically significant. Nonetheless, occasional CGM use and learning more about insulin titration can decrease the risk of this nighttime hypoglycemia. This data is significant because 25% of U500 insulin today is delivered through pumps designed for U100 insulin, which requires mathematic acrobatics to guarantee the right dose is delivered.

Dr. Simona Bertoli presented that a classic ketogenic meal (very low carb: 2% carbs, 88% fats, and 10% protein) showed a significantly reduced insulin response than a classic Mediterranean diet meal (60% carbs, 30% fats, 10% protein). Insulin response was measured by the amount of insulin released, or secreted, by beta cells in the pancreas, after the meal. In fact, the ketogenic meals required only 12% of the insulin required by the Mediterranean meals. In other words, total insulin secretion in the three post-meal hours was eight times greater in the Mediterranean group than the ketogenic group! This study was done in people without diabetes. Dr. Bertoli posed an interesting research question – what is the effect of significantly lowering circulating levels of insulin in people without diabetes? Could it be used to prevent or treat type 2 diabetes? In that vein, Virta Health presented new data in prediabetes at ADA, showing that a very low-carb intervention paired with technology-enabled remote care and coaching resulted in about 60% of participants moving from prediabetes to normal levels of glucose at one year. This data is very intriguing, though at this stage it’s difficult to tell whether the positive glycemic effects are due to the diet, the remote coaching, or a combination of the two.

AstraZeneca’s Qtern, a single pill combining Farxiga and Onglyza, showed similar effectiveness to Lantus in A1C reduction: 1.7% decrease with Qtern versus 1.5% decrease with Lantus. As an added bonus, Qtern helped people lose weight (about 3 pounds), compared to Lantus, which was associated with a 5-pound weight increase. Notably, hypoglycemia was less common in the Qtern group versus the Lantus group – 21% and 38%, respectively, experienced a hypoglycemia event.

The STAT study did a head-to-head comparison of Afrezza, an inhalable insulin, to NovoLog, an injectable; Afrezza is an ultra-rapid acting insulin, and NovoLog is a rapid-acting insulin. Compared to the participants on NovoLog, Afrezza users saw a 12% increase in time-in-range (70-180 mg/dl), which translates to 1.5 more hours per day in range. Additionally, post-meal blood sugar spikes were 20% (about 24 mg/dl) lower at breakfast and 25% (about 36 mg/dl) lower at lunch. Though the study size was small (60 participants), Dr. Satish Garg spoke highly of Afrezza as filling an unmet need for faster mealtime insulins, attributing the positive results to Afrezza’s very fast onset (about 12 minutes to the first measurable effect) and offset (about 90-180 minutes to return to baseline, depending on dose).

Medtronic shared that they will be launching an “outcomes-based guarantee” for the MiniMed 670G hybrid closed loop system. This means that Medtronic will reimburse insurance companies for any diabetes-related hospitalization or ER visit from patients on the 670G, making it more likely that a patient in this situation will not have to pay a significant portion out of pocket. The reimbursement will cap at $25,000 over a four-year period for each individual.

In other exciting news, Medtronic announced European approval of the 670G for users seven years and older. Launch is slated for this fall in 10 countries in Europe: Belgium, Denmark, Finland, Ireland, Italy, Netherlands, Spain, Sweden, Switzerland, and the UK.

In a sobering presentation, the RISE study results concluded that researchers know little about the development of type 2 diabetes in youth, except that it differs from type 2 development in adults. Participants in the study were children ages 10-19 with prediabetes or recently-diagnosed type 2 diabetes and were given metformin for 12 months or three months of Lantus followed by nine months of metformin. Given that both metformin and insulin have been used to improve beta cell function in adults, researchers were dismayed to find that neither treatment improved beta cell function in these children. The children on metformin did lose a small amount of weight on metformin compared to insulin. It’s undeniable that these results were disheartening, but it was a very important one to be done, and we will continue to watch the science behind this unfold.

Day 1: Big Focus on CGM and Access to Diabetes Care