By Abigail Dove and Lynn Kennedy 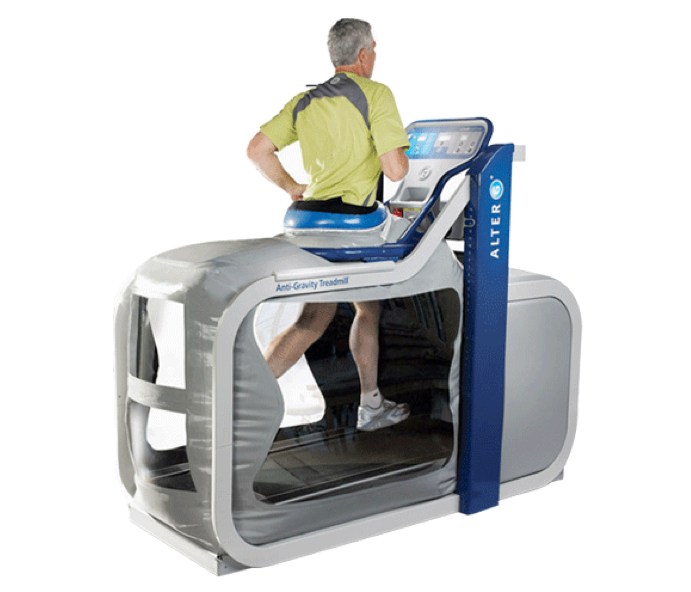 How it works and why it could help with exercise challenges. Plus, how diaTribe readers can try it for free

The benefits of exercise – like reducing blood sugar levels and improving insulin sensitivity – can be overshadowed by very real short-term barriers: injury, discomfort, lack of energy, and lack of enjoyment, in addition to time and cost constraints.

AlterG’s anti-gravity treadmill is an innovative approach to address barriers to exercise just like these. Featuring technology originally developed by NASA to help astronauts become accustomed to the feeling of being in outer space, the AlterG treadmill encloses the lower half of the user’s body in an inflatable chamber and uses pressure to help them become semi-weightless. The AlterG can “unweight” users by up to 80% of their bodyweight (roughly the same level of weightlessness one would experience on the moon!), making walking, jogging, and even running feel easier. Anyone who would like to exercise more but is prevented by pain or extra weight could benefit.

Currently, the AlterG is used mainly for physical therapy rehab and sports training, with the majority of machines being housed in physical therapy centers – and a few fitness centers – around the US. However, the technology is beginning to expand into other areas as a stepping stone to help people build their strength and stamina, overcome injuries, and become more active. So far, early results are promising for people with diabetes: recent clinical studies have shown that training on the AlterG can improve glucose levels and lower cholesterol. And by increasing the ability to move and exercise, the machine makes it easier to stay motivated to pursue – and achieve – those exercise goals.

diaTribe contributor Abigail Dove recently had a chance to give the AlterG a go at a conference in New Orleans. Read on below for more on her experience test driving what can only be described as very cool technology, and learn more about how you could try the AlterG for free – a special opportunity for diaTribe readers. 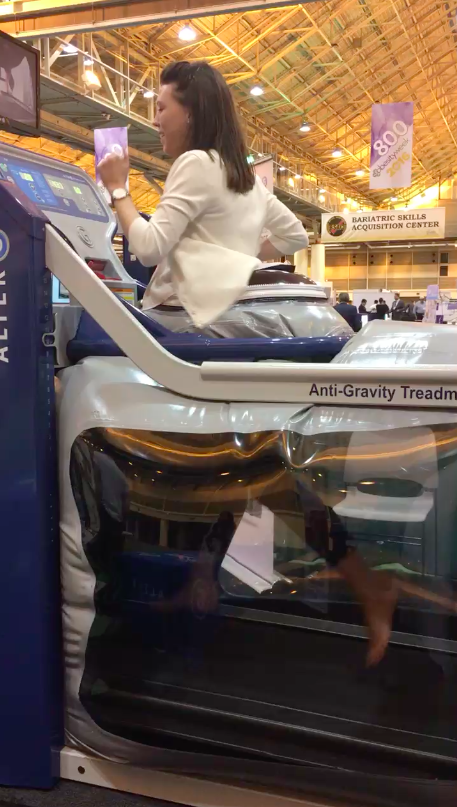 What is it like to use an Anti-Gravity Treadmill?

diaTribe contributor Abigail Dove had the opportunity to try the AlterG for herself, and the experience definitely did not disappoint. At first glance, the AlterG looks like your typical treadmill: a black moving track to step on, sloping handles along the sides, and settings to adjust speed and incline. The only notable differences are a loose fabric casing draped around the machine, and buttons to adjust the “gravity.” To begin, users put on a pair of black shorts with a short zippered skirt attached, and then step onto the treadmill. This skirt then zips into the AlterG’s fabric casing, creating an air-tight seal. Once the AlterG turns on, the enclosed casing gradually fills with air and creates a waist-high “air bubble” surrounding the treadmill and the user’s legs.

This inflated bubble itself has no effect on the weight the user experiences, and as the treadmill track begins moving, walking on the AlterG feels completely normal (besides the strangeness of being zipped into a blown up plastic bubble). However, adjusting the AlterG’s gravity settings creates a very different sensation. As the air pressure in the bubble changed to create lower and lower gravities, Abigail found that her legs began to feel lighter, and the load on her joints noticeably lessened, with less and less effort required to drive each step forward. This first became detectable when the treadmill unloaded only 10% of her normal weight, and was quite noticeable by the time 30% of her weight was “gone.” At the maximum anti-gravity setting, with 80% of her weight unloaded, walking felt virtually effortless, and jogging, even after intensifying the workout with increased speed and incline, felt only a fraction as tiring as it would normally. She found her strides lengthen and her steps felt bouncier, as if she were floating before her feet hit the ground.

What are the best features of the AlterG?

If the AlterG makes exercising feel so easy, how does it produce a meaningful workout?

Minute-for-minute, jogging while weightless on an anti-gravity treadmill does not expend as much energy as jogging outside or on a typical treadmill. That said, if exercise is easier to do on the AlterG, it makes it easier to do for a longer period of time (and a second, third, fourth time), likely increasing physical activity overall. Even professional athletes use the AlterG to boost endurance because it allows them to exercise more than they normally could without becoming fatigued or risking injury.

The biggest drawbacks of the AlterG are its price tag (it’s over $30,000, making it too expensive to buy for home use) and low accessibility (just over 1,000 machines in the US so far; find one close to you here). Some people who have tried it also report slight discomfort associated with being zipped inside the treadmill’s skirt and casing.

Want to give it a try?

AlterG is currently looking to gather more data about the benefits its anti-gravity treadmill can have for people with diabetes or prediabetes by providing exclusive, free access to interested diaTribe readers. With more data to support its potential for people with diabetes, AlterG hopes to make its machines more accessible and less expensive – maybe even qualifying for reimbursement under programs like the Diabetes Prevention Program (DPP).

If you like the sound of the AlterG, have diabetes or prediabetes, and are interested in trying it out for free, fill out AlterG’s form here. AlterG will search for a facility with an AlterG near you and arrange a free trial. If you wish to continue using the AlterG after your first try, let AlterG know and they will arrange for continued free use for up to three months.