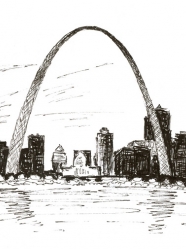 This year's AADE in August in St. Louis was extremely educational, as always. We tip our hats to the organizers for putting together an amazing faculty of speakers - especially for the well-attended general sessions that set the tone for four days of insights. 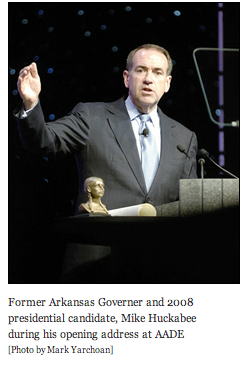 We applaud Former Arkansas Governor, Mike Huckabee's initiative in taking on diabetes and obesity, but we think he should also advocate that the government act directly. Mr. Huckabee argued that the government won't do anything until there's mass advocacy from the public, but we think it's going to have to be a more two-way process - patients will have to advocate, the government will have to take action, and it will (unfortunately) be an incremental process on both sides. In our view, the government should take a harder look at reforming food subsidies, for example subsidizing fruit and vegetables. It could also be more proactive in helping businesses and insurers realize that they'll be more efficient and pay less in the long term (for health costs) if they invest in preventive care.

"We don't have a health care system, we have a sick care system." We have a health crisis, which is leading to a health care crisis, and not vice versa. Because we are not focused on prevention, 80 percent of health care expenditures are spent on preventable chronic diseases, which are mostly due to overeating, under-exercising, and smoking. We spend more of our GDP on health care than any other country: 17 percent, compared with 10.5 percent in Switzerland, 9.5 percent for most European countries, and down from there.

Notably, pump and CGM expert, Dr. Bruce Bode, said that insurance companies were likely waiting to see hypoglycemia-related car accidents and comas before they think seriously about reimbursement for continuous glucose sensors. He added that not everybody shows marked improvement simply by using a CGM device. The STAR 1 trial showed that the best results are seen in patients who have A1c percentages already below 8 percent. In addition, preliminary results from one of his ongoing studies have shown the need for continued use of sensors in order to maintain improvements in A1c. That makes sense - we also understand that people who look at their CGM devices the most frequently do the best - that makes sense too! If you watch closely, you're more likely to make changes, of course, especially if you're on pump therapy and it seems likely if you make frequent small changes, that obviates the need to bigger changes and makes big big shifts less likely to be necessary.

If you have type 2 diabetes and your A1c is above 8 percent, Dr. Leahy says you need insulin and that if you take it, you'll feel better! Dr. Leahy, a noted endocrinologist from the University of Vermont, said it was great that insulin is now on the same line as second-line therapy in the ADA guidelines. There was applause when he said people need to be put on insulin earlier. He said that it is imperative that primary care physicians (PCPs) know how to put people on basal insulin " he said, "There's not enough of us, and many people are going to need it." Dr. Leahy said he would like to change stepped therapy, such that the first stage is one or two oral drugs, the second stage is basal insulin, and the third stage is basal insulin plus another insulin dose at the biggest meal. Dr. Leahy is also a "big believer" in Symlin, an anti-hyperglycemic drug reported to also help with weight loss in type 1s and insulin-dependent type 2s. As always talk to your physician before altering your therapy.

Dr. Leahy said he often lectures to PCPs. Responding to the prompt, "My biggest problem in starting insulin is:" the first answer from PCPs is always: "My patients won't do it" (other options are, "Not sure what to do," "Not sufficient time or support staff," and "Fear of weight gain or hypoglycemia"). The main problem PCPs say their patients cite is fear of injection. However, less than 50 percent of PCPs have ever ("once in their life") given a saline injection in the office. "It's daunting that they don't know these things." We personally believe that "physician resistance" might be just as big or bigger than "patient resistance" especially since some doctors don't think they have the time to teach insulin, given the reimbursement rates for education are almost nil!

To the nearly full hall, the highly-respected Dr. James Gavin of Emory University gave a well-received talk about diabetes outcome disparities among ethnic groups in the US. African Americans are 1.8 times as likely to have diabetes as whites (about 13 percent of African Americans have diabetes) and have 3-5 times the risk of lower-limb amputations, as well as increased risk of heart attack, kidney disease, and premature death. Minority groups have lower frequency of home-glucose testing than whites and less use of intensive insulin therapy. Solutions include culturally appropriate programs - this should not be "taken lightly" - that are economically feasible, with more aggressive insulin and combination therapy in minority groups.

There are real genetic differences among ethnicities, but the epidemic in high-risk minorities is mostly environment-driven. Our genes haven't changed in the last 30 years, but diabetes has tripled. Numerous barriers exist for improved outcomes: lack of awareness of the disease and its consequences, insufficient access to patient education, delayed diagnosis, living in a disadvantaged community, distrust of medical professionals, failure to treat early and aggressively, and the requirement of complex medical interventions (which means more time and resources) from the provider.

We need especially aggressive treatment for minorities. Dr. Gavin pointed out that the expert National Minority Quality Forum has recommended, given earlier disease onset among minorities, the greater need to attempt to alter the natural history of the disease and to use more intensive therapy with earlier combo therapy and with insulin. He emphasized that the National Diabetes Education Program (NDEP) is working to disseminate information about diabetes and encouraged health care providers to use and refer their patients to its resources.

The amazing diabetes advocate Dr. Francine Kaufman (Children's Hospital, Los Angeles) distinguished between type 1, type 2, and maturity onset diabetes of the young (MODY). In children, about 90 percent of diabetes is type 1, less than 10 percent is type 2, and only a small amount (1-3 percent) is MODY. Generally type 2 and monogenic (caused by a mutated single gene) diabetes are post-puberty diseases, although recently there has been a great increase in the number of pre-puberty cases of each. It is often difficult to differentiate type 1 from type 2 diabetes in overweight adolescents. Genetic testing is commercially available and should be considered for any child who fits the MODY diabetes profile - white, not obese, and does not have Acanthosis nigricans, a skin hyperpigmentation often found on the back of the neck or other body folds .

Dr. Kaufman discussed the situation of type 1s who gain weight and develop type 2. This situation is growing more common, and Dr. Kauffman suggested that metformin should be considered in such cases. In one study of type 1s, metformin lowered A1cs by 0.6 percent and reduced the insulin dosage by about 20 percent. In another study, metformin had similar benefits, and additionally caused significant weight loss and lowered LDL cholesterol. More studies are required to investigate metformin treatment in type 1s.

Dr. Sanchez of the University of Texas School of Public Health delivered an interesting talk in which he spoke about the need for health reform and improvements in health literacy, especially among minorities. He called for better integration of public health and medical care as well as better prioritization and reimbursement of interventions that most efficiently optimize health. He was often interrupted by bursts of applause from the responsive 1,500+ member audience. He highlighted the need for health care reform to create patient-centered, primary care based, prevention-focused and community-oriented interventions. He stressed the need for better integration of public health and medical care since patients spend so little time in doctors' offices and so much time where they "earn, learn, buy, lie, pray, and play".

The health care industry needs to reexamine its priorities. While lauding the value of scientific research, Dr. Sanchez pointed out that getting people to quit smoking may be a more immediately effective tool for diabetes treatment than extended research into "beta blockers". He noted that if resources were diverted from biomedical research into education, diabetes patients would be in better position to control their disease or avoid it altogether. He cited statistics showing $31,300 spent per quality adjusted life year (QALY) for metformin as opposed to $1,100 per QALY for lifestyle intervention.

During pregnancy, women should have fasting blood sugar under 96 mg/dL (5.3 mmol), two-hour post-prandial blood glucose (PPG) <140 mg/dL (7.8 mmol), and overnight blood glucose of 65-135 mg/dl (3.6 to 7.5 mmol). Ideally, A1cs should be lowered before pregnancy to as close to normal as possible - pregnancy expert Dr. Lois Jovanovic recommends under 5.5 percent. Exercising when possible remains an important part of glucose control throughout pregnancy. Ketoacidosis (extreme hyperglycemia) can occur rapidly and at lower glucose levels during pregnancy. During the first trimester, morning sickness and food intolerance often contribute to what is called "maternal hypoglycemia". During the second and third trimesters, insulin resistance increases due to the high levels of many pregnancy-related hormones, and patients need more insulin, perhaps even triple or more what they needed pre-pregnancy. Insulin requirements drop back to normal levels or below normal levels after pregnancy, though nursing can cause more glycemic variability than usual as well. 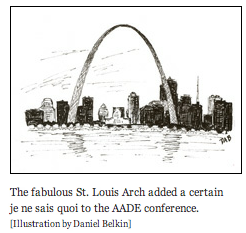 Insulin is the "gold standard" for pregnancy for type 2 patients. Oral agents are not generally recommended for use during pregnancy. There have been no studies yet of Apidra, Lantus, or Levemir during pregnancy. Some studies have found that both insulin and glyburide are equally successful at any given level of fasting blood glucose. Recommendations published recently by the 5th International Workshop - Conference on Gestational Diabetes suggested that glyburide is a useful adjunct (additional therapy) to medical nutrition therapy and physical activity in women with gestational diabetes. Glyburide may be less successful in obese patients or those with marked hyperglycemia earlier in pregnancy. The same international body does not recommend metformin, Byetta, or Symlin for the management of diabetes during pregnancy as trials have not been done to determine safety.

It is easy to come up with a list of four or more cheap and safe medications patients should take daily - ask your healthcare team if a daily dose of the following is right for you: aspirin, an ACE inhibitor - for hypertension, a statin daily (probably, not absolutely), and antioxidants. Switching to a totally different category, it sounds like we're going to see a lot more about fish oils in the literature in the future, and it's something we should probably all talk to our doctors or educators about taking.

Mike Huckabee also noted: Change is possible, but it's going to take a generation. We need to first change attitude via awareness, and then change the environment, like better snacks in schools, walking paths, escalators that are turned off at least some of the time!. The action phase is when we get laws once new behavioral norms are in place. Note that this comes after societal changes - we can't legislate proactively or it will be a battle about personal rights. "Universal coverage is not as critical a goal as universal health," he said. "We can get to universal coverage if we want to, but the most important change to make is a change in culture." The solution is not as simple as laws, governing food in schools, for example - though, he added, these are good goals (he worked with President Clinton to get sugary soft drinks out of school cafeterias).