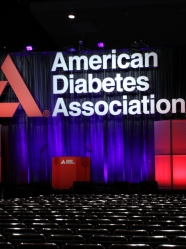 One striking theme of the 2013 ADA meeting in terms of type 2 diabetes was using old therapies in inspired new ways. Dr. Abdul-Ghani from the University of Texas Health Science Center San Antonio presented on an intensive type 2 diabetes treatment approach: patients newly diagnosed are simultaneously started on three (!) drugs instead of the usual treat-to-fail pathway (try one drug, use it until it fails, wait, add another). We also detail the notable efforts to combine GLP-1 agonists and insulin, and data on an exciting new form of metformin that doesn’t cause as many gastrointestinal side effects and is safe for the kidneys.

Metformin is one of the most widely taken type 2  drugs, but for some, the drug causes too many gastrointestinal side effects, and many patients do not receive the optimal dose of metformin due to issues with GI tolerability. Additionally, patients with kidney disease cannot take metformin because high levels of the drug in their blood increases their risk of lactic acidosis, which is when the body’s tissue and blood are too acidic and can cause nausea and vomiting. Now, Elcelyx Therapeutics is developing NewMet, a delayed release formulation of generic metformin that directly targets the small intestine. A lower dose of NewMet (1,000 mg) can have the same blood glucose lowering effect as the current metformin, but is not present in the blood at such a high level – in the study, metformin concentration decreased by 45%-68%. These two properties of the delayed-response metformin reduced the gastrointestinal side effects, allowed more patients to receive the maximally effective dose, and more importantly, increased safety for people with kidney disease who often have few safe therapy options. Though NewMet might be helpful to these patients, it’s not yet clear if the drug would help those who don’t respond to metformin because they are genetic non-responders. These results are from a phase 2 study, so it will be some time before NewMet is available. However, they are a positive sign for people with type 2 diabetes and we are eager for this promising formulation of metformin to become available to people alone and in combination with other drugs.

One of the most anticipated talks of ADA 2013 was Dr. Ralph DeFronzo’s (University of Texas Health Science Center San Antonio, TX) “triple-therapy” trial. In the study, people who were newly diagnosed with type 2 diabetes were simultaneously started on metformin, the thiazolidinedione Actos (pioglitazone), and the GLP-1 agonist Byetta (exenatide). The conventional therapy group took the more common stepwise approach, first using metformin, then adding a sulfonylurea, and then adding basal insulin. Dr. DeFronzo and his team hypothesized that early intensive treatment at diagnosis, based on addressing the underlying cause of diabetes, which includes insulin resistance, rather than the symptoms of type 2 diabetes, would beat the conventional approach of moving from one therapy to the next once a drug was no longer effective. After 24 months, their hypothesis turned out right – those on the triple-therapy had an average A1c of 6.0%, which compared favorably to the 6.6% average A1c of those who were on conventional therapy. Both groups started at an average A1c of 8.6%. It’s noteworthy that the conventional therapy group had very good results as well, but Dr. Abdul-Ghani, who presented the results, emphasized that the number of people who experienced hypoglycemia in the triple therapy arm was one-third of that in the conventional therapy group (15% vs. 46%). Furthermore, people on triple-therapy had a mean 1.2 kg (2.6 lb) weight loss compared to a 4.1 kg (9.0 lb) weight gain in the conventional therapy group.

Another very, very exciting future combination therapy is IDegLira, Novo Nordisk’s injectable  mixture of Tresiba (insulin degludec) and Victoza (liraglutide). Tresiba is a very long acting insulin, and Victoza is a GLP-1 agonist. The concept is that a mixture of these two drugs will enjoy the A1c lowering benefit of both, and each drug’s action reduces the side effects of the other (e.g., while Tresiba might cause weight gain, Victoza can promote some weight loss). Dr. John Buse (University of North Carolina, Chapel Hill, NC) presented results from the DUAL-1 Trial, a 1,600 patient study that compared the IDegLira combination to Tresiba and Victoza alone. The study’s participants had previously taken either metformin with or without Actos (pioglitazone) and had an average A1c of 8.3%. After 26 weeks, those who took IDegLira were able to reduce their A1c by 1.9%, greater than with either drug alone (-1.4% for Tresiba, -1.3% for Victoza). This translated to an impressive 81% of patients taking IDegLira that achieved the A1c goal of less than 7.0% (and a striking 70% reaching less than 6.5%). Moreover, IDegLira was better than Tresiba alone in terms of hypoglycemia (one third less than with Tresiba) and weight (slight weight loss, instead of weight gain with Tresiba). IDegLira was also associated with about half the rate of nausea than Victoza alone.  Tresiba is currently not approved in the US (although it is available in the UK, Denmark, and Japan; see new now next in diaTribe #53), and Novo Nordisk is working on completing a cardiovascular outcomes trial to demonstrate the drug’s safety (see new now next in diaTribe #52). European regulatory filing of IDegLira is expected soon, while it will be several years before filing can occur in the US. The most depressing part about the recent FDA degludec delay is how it is slowing innovation in the field.

In a session that had more than a thousand attendees, Dr. Vanita Aroda from MedStar Health Research Institute gave a presentation on the safety of GLP-1 agonists and DPP-4 inhibitors. She reiterated what researchers discussed at the recent NIDDK/NCI Workshop on Pancreatitis, Diabetes, and Pancreatic Cancers (see new now next in diaTribe #55). Dr. Aroda drew a few major conclusions. Though some animal studies have identified possible mechanisms to suggest a potential pancreatic risk with these therapies, the real debate is over which of these studies are relevant and representative since different animal models have had such different results. She also made it clear that the current clinical evidence is not enough to change how we view the safety or risk of these drugs. Even in medical practice, the recent studies showing pancreatic risk have not substantially changed clinical recommendations. Lastly, she asserted that researchers need to gather together the appropriate expertise and data based on rigorous methods to address questions of safety.

One of the most noteworthy subjects discussed at the presentation came during the question and answer session. A commenter asked what she would advise a patient who came to Dr. Aroda, expressing concern about these drugs because of what she had seen on television. Dr. Aroda turned that question over to the health care providers sitting in the audience, asking how many of the thousand-plus attendees would suggest stopping the drug – no hands rose in the audience. Dr. Aroda then asked how many would educate the patient on balancing the benefits and risks of the drug and to continue on the drug – several hands went up in the auditorium.

It’s clear that the question of how DPP-4 inhibitors and GLP-1 agonists relate to pancreatitis and pancreatic cancer continues to exist. However, the benefits of these drugs for some are undeniable, and as Dr. Aroda suggested, “We need to spend more time with patients educating them on what the comparative benefits and risks are.”