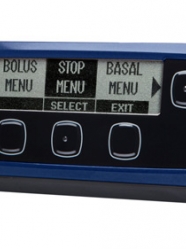 Under one in three people with type 1 diabetes in the US is on an insulin pump, and for those with type 2 diabetes on insulin, it’s less than 1 in 100. This, despite the fact that pumps can help patients:

- Have much more flexible eating and exercise patterns

- Improve their overall quality of life.

With those benefits in mind, I often wonder why more people aren’t on insulin pumps –I recognize that although not everyone is, I’m very lucky to have access to this sort of diabetes technology.

Asante Solutions, maker of the Snap insulin pump (previously known as the Pearl), did some market research, and the company identified four reasons why many patients might not want to go on a pump:

Asante designed the Snap to specifically address the first two barriers noted above. I wore the pump for a couple of weeks and what follows is my experience using it.

“Less prep time. More life time” is one of the Snap’s snappy taglines, and it’s this attribute of the pump that most stood out for me. Unlike other insulin pumps on the market, where a reservoir, cartridge, or pod must be manually filled with a syringe, Asante’s Snap uses pre-filled Humalog cartridges; (the company is also working on a Novolog cartridge). That makes infusion set changes a LOT faster. On average, changing an infusion set and reservoir took me just over two minutes with the Asante Snap, compared to a bit over three minutes with the Insulet OmniPod, four minutes with the Medtronic Paradigm and the Animas OneTouch Ping, and around nine minutes with the Tandem t:slim. While a few minutes do not seem like much, anything that takes time away from diabetes is great.

The Snap’s pre-filled Humalog insulin cartridge is one of the biggest time savers, since I find that messing with syringes and flicking air bubbles usually takes at least 30 seconds. Asante also added what it calls an “auto-prime” feature: once the pre-filled cartridge is slipped into the pump and connected to the infusion set, it immediately primes the entire line of tubing in a less than a second. It’s impressive to see in person – insulin literally drips off the end of the infusion catheter nearly instantaneously after connecting the tubing to the cartridge. I have found priming to be the single most time consuming aspect in the set change process, so the auto-prime feature is a welcome innovation.

There’s one additional aspect of the set change process that Asante has really improved. The 300-unit Humalog pre-filled insulin cartridges are FDA approved for up to seven days of use in the Snap. (They are made of glass, and there is some evidence that the insulin stays more stable in glass than in standard plastic reservoirs.) Since I use about 25-30 units of insulin a day, one pre-filled insulin cartridge easily lasts me a week. Of course, I still needed to change my infusion site every three days, like any other pump, but the benefit of a seven-day cartridge label meant I only needed to change out the pump’s insulin cartridge every other set change – another time saver. My schedule looked something like this: Monday (infusion set and cartridge change; ~2 minutes); Thursday (infusion site-only change; 40 seconds); Sunday (infusion set and cartridge change; ~2 minutes). That translates to less than five minutes per week spent on reservoir/set changes with the Snap vs. the 10-27 minutes I have found with other pumps (which require a new reservoir fill with every set change). This translates to 6-19 hours saved per year! For those who change their sets every two days, the time difference is even bigger.

When I first picked up the Snap, I immediately noticed the shape – the pump is about the same thickness as a Medtronic Paradigm or Animas OneTouch Ping (though a bit shorter), and it is slightly wider than either pump. This didn’t bother me too much, since I know the pump’s overall design is really built around the long pre-filled Humalog insulin cartridge. For me, the time savings on the aforementioned set change outweighed the slightly longer pump body, though I realize some people place a greater emphasis on wearability size – if you do, Insulet’s second-generation OmniPod or Tandem’s t:slim might be better options . That said, Asante told me that the Snap is about 25% lighter (with insulin) than other pumps. As with most things in diabetes, there is no one-size-fits-all!

The Snap’s user interface is unique and reminded me of a video game controller. There are five buttons surrounding the pump’s screen, and each is labeled with a small on-screen indicator tab to denote its function in a particular menu. Unlike other pumps, where menus are laid out vertically and you scroll up and down, the Snap’s menu is laid out horizontally – you scroll right and left using both of your thumbs on opposites sides of the screen. It definitely takes some getting used to. Overall, I liked the simple and intuitive menu structure: Bolus, Stop, Basal, Prime, Log Book, Setup. I generally found that items were always located in the sub-menu I expected, making it easy to navigate.

In terms of bolus speed, Snap was faster than most pumps I’ve tried. The standard test I’ve applied in recent test drives – programming a combination meal and correction bolus for 30 grams of carbs and a blood glucose of 165 mg/dl – took me an average of 15 seconds on the Snap, a bit slower than the nine seconds on the Tandem t:slim, slightly quicker than the 18 seconds with the Medtronic Paradigm, and much faster than the 26 seconds with the Animas OneTouch Ping.

While the Snap’s screen is black and white, the font is huge as far as pumps go – about 40% bigger text than the next largest menu option on the market. I thought it was great of Asante to “go big,” as many people with diabetes are visually impaired. Indeed, Asante told me that around 50% of the people in the pump’s beta trial wore reading glasses. The pump screen is also easy to read outdoors, which cannot be said for all pumps on the market. In the future, I think Asante could consider a color screen (and perhaps a touchscreen) for the Snap, though I recognize those additions come with the caveat of needing a larger and/or rechargeable battery.

The Asante Snap has several other unique features that I think are worth mentioning:

I found a few small areas that the Snap could be improved.

Cost and Getting on the Snap

As I noted, cost is a big concern for many when deciding to go on a pump. Asante has adopted more of a ‘pay-as-you-go’ model with the Snap. The idea is that the upfront cost to get on the Snap is much lower than most other pumps (Animas, Medtronic, Roche, Tandem), while the ongoing cost of using the Snap is higher. I’ve provided a general guide of pricing below, though the amount you actually pay out of pocket initially or monthly will depend a lot on your own insurance situation. For instance, when getting a brand new pump in the past with Aetna insurance, I’ve had no out-of-pocket cost, even though the list price for the pump was over $4,000.

To date, the typical total cost (the amount insurance pays plus the patient co-pay) for the Snap controller has been approximately $775, similar to the ~$800 cost of the Insulet OmniPod and much cheaper than the Tandem t:slim (about $6,995), the Medtronic Paradigm Revel (about $6,500), and the Animas OneTouch Ping (about $6,300). However, ongoing costs for the Snap are higher than those for traditional pumps. The company estimates that the monthly total cost of Snap supplies is approximately $375 (the amount insurance pays plus the patient co-pay). This is close in price to the OmniPod and more expensive on an ongoing basis than buying infusion sets/reservoirs for other tubed pumps. In short, to figure out how much it will cost you to get on the Snap or any other pump, it’s best to contact the company directly.

I was glad to see that the Snap will be easily upgradeable – for $99, users will get a new controller when new features come out (e.g., downloadable, CGM, etc.). The upgrade will be offered regardless of how long a patient has been on the pump.

I was also excited to see that Asante is offering anyone a risk-free, four-week free trial of the pump. Not even a deposit is required, and the trial does not involve insurance. Patients get a month of supplies and simply return the controller when they are done. What a fantastic way to let patients try before they buy! Asante advises diaTribe that demand has been very high for trials. You can find out more here.

Overall, I thought the Snap was a very good insulin pump, especially for those who have never pumped before and are hesitant about making the switch, or for those who want to spend as little time as possible on changing their infusion set. Asante tells me that like Insulet, it is seeing a nice proportion of users coming from multiple daily injections. For more information, visit www.snappump.com.

Adam is the co-managing editor of diaTribe and the Chief of Staff at Close Concerns. He was diagnosed with type 1 diabetes at the age of 12 and has worn an insulin pump for the last 11 years and a CGM for the past three years. Most of Adam's writing for diaTribe focuses on diabetes technology, including blood glucose meters, CGMs, insulin pumps, and the artificial pancreas. Adam is passionate about exercise, nutrition, and wellness and spends his free time outdoors and staying active. He can be contacted at adam.brown@closeconcerns.com or @asbrown1 on twitter.