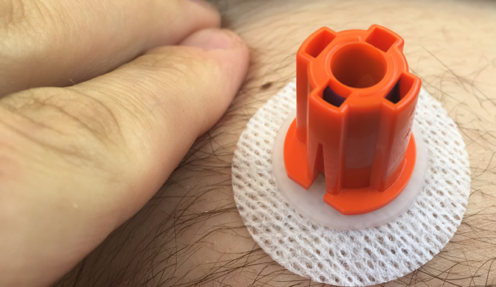 FlowSmart infusion set officially discontinued. On the plus side, BD plans to launch a tubeless type 2 diabetes insulin patch pump starting in late 2019.

In a recent investor update, BD announced two major diabetes pipeline updates. First, the company has discontinued its Medtronic-partnered insulin pump infusion set, the MiniMed Pro-Set with FlowSmart technology. Following limited launch issues in 2016 and many delays since, this was not a big surprise. However, it represents less competition in infusion sets. On the plus side, BD expects to launch a tubeless patch pump for type 2 diabetes in late 2019. Read more details below!

Following a limited launch in 2016 and few updates since, BD has decided to discontinue its long-in-development MiniMed Pro-set with FlowSmart technology. See our previous test drive from the limited launch with partner Medtronic, when some users complained of kinked cannulas and elevated blood sugar levels after insertion. Though Adam liked the set’s design and features – less painful insertion needle, extra side-hole for insulin flow – he experienced some of those kinking issues as well.  The decision was apparently based on the set’s design and economic challenges.

The most exciting near-term infusion set innovation is Unomedical/Medtronic’s Mio Advance, which has an all-in-one, fully disposable, completely hidden needle. Like Dexcom’s G6 CGM applicator, Mio Advance requires hitting one button to insert, after which the needle is automatically retracted. We’ve tested Mio Advance and think it is a huge step forward for infusion sets. It is currently available in Canada and certain countries in Europe through Medtronic. Mio Advance was actually FDA cleared earlier this year, but there are no details on US launch timing yet. We’re also not sure if it will be available for Tandem pumpers.

Beyond the infusion set work, BD has also been working on its own tubeless, basal-bolus insulin patch pump designed for people with type 2 diabetes. The company expects to submit the pump to the FDA in the coming months and hopes to initiate a limited launch in late 2019.

The tubeless pump will hold 300 units of insulin in a disposable, three-day-wear, on-body wearable patch that communicates with a reusable handheld controller (see an older picture of it below). The handheld has Bluetooth connectivity and will relay data to a smartphone. (Similar in concept to Insulet’s 200-unit Omnipod Dash.) BD has suggested that the pump’s cost will be closer to insulin pen injection therapy, an excellent move. Historically, pumps have been more expensive than pens/injections, making them a tougher sell to insurance companies – especially for people with type 2 diabetes, where there are fewer studies showing benefit. If BD can show a similar cost to injections, insurance companies will hopefully open pump access to people with type 2 diabetes – offering the same mealtime dosing convenience, discretion, and continuous basal infusion that type 1 pumpers currently have.