Breakthrough: Elizabeth Hughes, the Discovery of Insulin, and the Making of a Medical Miracle 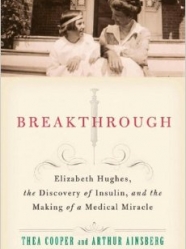 It’s been said that there’s never been an easier time than now to have diabetes, and that’s rarely been clearer to us than when we read Breakthrough, Thea Cooper and Arthur Ainsberg’s new book about the discovery of insulin. (James Hirsch also wrote a Logbook about Breakthrough in diaTribe issue #23.) Cooper and Ainsberg explain that in the 1920’s, diagnosis with type 1 diabetes meant one of two things. Without treatment, it meant death could be expected within a year. Individuals with type 1 diabetes who sought treatment could extend their life expectancy to eighteen months, with one caveat: the most successful therapy prior to 1922 was a starvation diet of as little as 400 calories a day. (This translates roughly to a single bagel every 24 hours, except that one of the diet’s central provisions was “no desserts or bread, ever.”) Every morsel of food (mostly “eggs, cream, bran rusks, all in extremely limited quantities”) had to be weighed and recorded, with daily intake precisely maintained to avoid hyperglycemic coma on the one hand and death from malnutrition on the other.

Breakthrough’s central character, Elizabeth Hughes, is 12 years old when she receives her diagnosis of diabetes in the spring of 1919. The lively, likable daughter of former Supreme Court Justice and presidential candidate Charles Evans Hughes, Elizabeth has access to the best diabetologist in the state of New York. Frederick “Dr. Diabetes” Allen is the brilliant but insensitive man credited for realizing that proteins and fats, as well as carbohydrates, are problematic for people with diabetes – hence the all-around starvation diet. Despite his lack of people skills, Dr. Allen convinces Elizabeth’s parents to commit her to his intensive therapy, and he even gets Mr. Hughes to back the establishment of new inpatient facilities for Elizabeth and other children with diabetes. It is a tribute to Cooper and Ainsberg’s storytelling that they make their narrative consistently engaging, even though they give away the ending in the first chapter: Elizabeth survives to adulthood, thanks to the miraculous discovery of a substance called “insulin.”

The authors describe the story of insulin’s development the same way they narrate Elizabeth’s life: with urgent dialogue and frequent cliffhangers. If some of the scenes appear to be too dramatic, it may be because they didn’t happen. The authors acknowledge that “in some cases,” dialogue and incidents have been “invented or augmented for narrative purposes” – a concession that, in our view, diminishes an otherwise noble story. Readers often don’t know what the authors believe to be true and what was simply invented.

Nonetheless, it is known that researchers around the world had been painfully close to purifying insulin for well over a decade when Frederick Banting, the Ontario-born orthopedic surgeon who led the efforts to isolate and purify the substance, and his assistant Charles Best started experimenting with dogs in 1921. “[Banting] would later say that if he had been more familiar with the literature on the subject and had known about the previous attempts, he would not have pursued his idea at all,” writes Cooper and Ainsberg. “Fortunately for Elizabeth Hughes and millions of other children, he knew next to nothing.”

The insulin discovery research story is remarkable all the way from its humble beginnings (Banting and Best, sweaty and surrounded by dog feces, struggling to isolate insulin from canine pancreases in a dingy laboratory) to its controversial conclusions. As the researchers enjoy more and more success, Banting becomes increasingly unstable, paranoid that his colleagues will steal credit for his and Best’s early work. He clashes constantly with Macleod, the seasoned scientist who oversees the experiments and attaches his name to the insulin research papers so they will be more likely to publish. Ultimately, however, Banting and his colleagues maintain just enough harmony to earn worldwide fame for the discovery of insulin and even to win a Nobel Prize (Canada’s first, awarded jointly to Macleod and Banting in 1923). With sudden demand for insulin and no consistent means of producing the miracle drug, the researchers also reluctantly patent insulin and its purification so that they can partner with Eli Lilly. In an age when many physicians considered patents a violation of the Hippocratic oath and drug companies lacked internal research and development divisions, insulin’s path to the marketplace changed the course of the pharmaceutical industry. Most dramatically, from the moment that Eli Lilly began selling insulin in October 1923, the drug has saved millions of lives.

For some patients, the benefits came even sooner than that. By the summer of 1922, Elizabeth Hughes has outlasted Dr. Allen’s most optimistic estimates, but she is nearing death. Her desperate mother pleads with Banting to treat her daughter, but his insulin supply is still sorely limited and he refuses to extend it beyond his few current patients. But then in August he changes his mind: Elizabeth goes to Canada and begins taking insulin, undergoing an immediate and dramatic improvement. She goes on to live a long, successful life in which she successfully hides her diabetes from more or less everyone, doing (as far as anyone knows) little to support diabetes-related causes. So is her story then one of persistence or privilege? Cooper and Ainsberg take a fairly sympathetic view, and from our perspective, it’s difficult to condemn the Hughes family’s conduct during a time when diabetes was much deadlier and more greatly stigmatized. And we are grateful that, thanks to a 90-year-old medical breakthrough, millions of people with diabetes can now think about how – not just how long – they will live their lives.

Editors note: Arthur Ainsburg will be speaking at Kelly and John Close’s home in San Francisco on January 15th. If you would like to be invited please visit cpslectures.com and sign up to be on the mailing list for their salon.