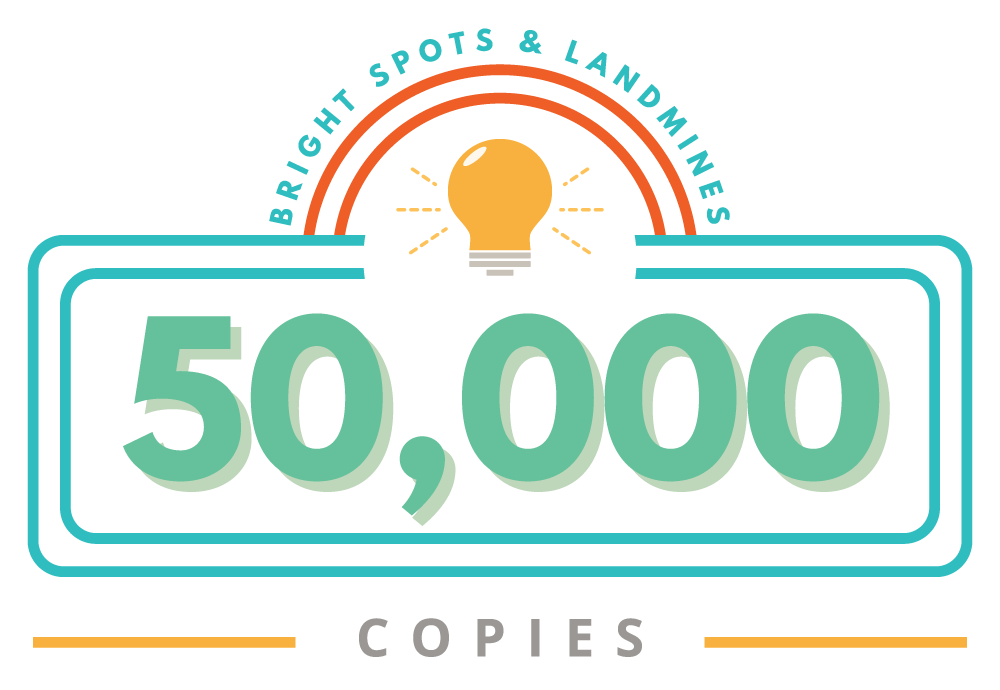 One year ago today, The diaTribe team and I were excited to publish Bright Spots & Landmines: The Diabetes Guide I Wish Someone Had Handed Me. We launched the book as a free download (or name your own donation) as well as on Amazon priced at-cost. In April, we launched a mmol/l version as a free PDF, on Amazon UK, and on Amazon Canada.

More than 50,000 copies of the book have been distributed so far (!), and readers have given us some amazing feedback. We thought it might be fun to share some of our biggest surprises and lessons – about living well with diabetes, about what tips people have found useful, and even where we’ve received the most criticism. Enjoy!

Q: What tips in the book have received the most positive feedback from readers?

These three come to mind:

1. Eat less than 30 grams of carbohydrates at one time.

By far, this is the tip I hear the most positive feedback on – some readers have told me this Bright Spot alone has dropped their A1c by multiple percentage points! Others point to dramatic improvements in time-in-range, and almost everyone says it has made life with diabetes so much easier and less frustrating.

In the past month, two journals have published articles on the benefits of low-carb eating in diabetes: this type 1 study appeared in Pediatrics, while this type 2 study appeared in Diabetes Therapy. I’ve shared my own Bright Spot experience in this column many times, so I won’t review it here.

Interestingly, this tip also generates the most emotional and even angry reactions from a fraction of people who believe in higher-carb approaches – more on that below.

2. Blood sugars are not “tests”; they are neutral information to make a decision

This subtle but critically important reframe has been gamechanging for many readers, ranging from newly diagnosed to several with 50+ years of diabetes. In my experience, attaching “good’ and “bad” grades to the numbers is one of the worst things we can do – it encourages feelings of failure and checking glucose less frequently. Instead, we should be celebrating every single data point as an opportunity to learn, to change something in the moment, to reflect on what could be different next time, and to manage the 42 factors that affect blood sugar. Robyn Russell put it well in this Amazon review:

“An out of range blood glucose reading isn't a moral failing on your part. It's just a speedometer that tells you how fast or slow you are going.”

3. “Bright Spots” are more important than “Landmines,” but we don’t pay enough attention to them.

So much of the focus in diabetes is on mistakes – When did I mess up? When is my glucose going high or low and how can I avoid those scenarios? This “Landmines” thinking can be valuable, but it can also be truly deflating – especially when it’s repeated every day for years and decades, and especially when I’m actually trying hard. A year after the book’s launch, I believe even more strongly in more focus on “Bright Spots”:

I’ve been telling every single diabetes device company to add “Bright Spots” pattern recognition to its software – help me identify what I’m doing well and how I can replicate those moments and decisions!

Q: What feedback has surprised you the most?

1. How much a single, tiny tip can radically change someone’s life with diabetes.

One reader told me switching to chia pudding for breakfast dropped his LDL cholesterol by 30 mg/dl within 30 days. In her Amazon review, Barbara Lee Hunt similarly noted, “I've been eating the pudding for breakfast for a week and the drop in my after-breakfast BGs has been around 100 points [mg/dl], from the 240s and 250s to the 140s and 150s (sometimes down to the low 130s).”

We hear similar feedback for other tips, like walking after meals, getting at least 7 hours of sleep, filling half of each plate with veggies, having an automatic hypoglycemia correction, and substituting veggies in place of restaurant side dishes. Bright Spots & Landmines has hundreds of these tips, but it only takes one to make a big difference.

2. How many people are still told at diagnosis, “You can eat what you want, but just take insulin to cover it.”

I’ve spoken in-person to thousands of people in the past year, and this advice remains rampant. I understand the desire to shelter people at diagnosis, but there are huge consequences and drawbacks. This advice set me up for ten years of out-of-range blood sugars and tons of frustration.

3. How the same tips can resonate with such a wide variety of people.

We’ve heard positive feedback on Bright Spots & Landmines from people with type 1, type 2, and even prediabetes. Some readers have written us with gratitude following a new diagnosis, while a sizeable number have had diabetes for over 50 years. One reader, Dr. Charles Grammes, has had type 1 diabetes for 72 years – he was diagnosed in 1945!

Q: What tip is the hardest for you to implement?

Consistently getting 7-9 hours of sleep per night, which is what most people need.

This Joe Rogan podcast with Dr. Matthew Walker (author of the recent bestseller Why We Sleep) has completely reinvigorated my motivation to sleep more. I thought I understood why lack of sleep is dangerous, but these two hours blew my mind. Dr. Walker talks about the link between lack of sleep and cancer, Alzheimer’s, traffic accidents, medical errors, and much more. Two of my favorite quotes:

“Sleep is the elixir of life. It is the most widely available, democratic, and powerful healthcare system I could ever possibly imagine.”

Q: What has been the most controversial and criticized part of the book?

Of the ~1,000 combined reviews, social media comments, and emails on Bright Spots & Landmines, less than 1% have been harshly negative or downright mean – with most of those focused on my experience eating a diet low in carbs (around 100 grams per day, with the majority from fiber) and high in fat (nuts, seeds, olive oil).

I like to ground the discussion in this way: 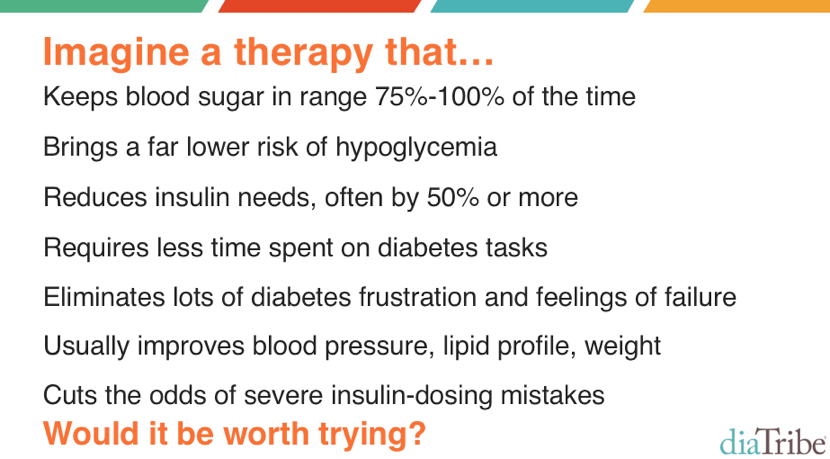 If this were a diabetes drug, would we be excited about it? Would we prescribe it? Would we test it in lots of studies and figure out who could benefit from it?

I’m always looking to expand my diabetes toolbox, especially with things that improve outcomes (time-in-range, hypoglycemia, quality of life) and reduce my daily burden. For me, low-carb, high-fat eating is another awesome tool in the box – it may not suit everyone’s needs, but it is the best tool I’ve found.

Most of the low-carb criticism relates to “lack of long-term data” or theoretical concerns about cholesterol and heart disease. There’s no question we should get more robust science and trials to answer these questions definitively – this is a pressing scientific question in diabetes. However, we also have to operate now with the information that exists. And as an aside, even a “recommended” diet like DASH has not been rigorously tested in large, long-term trials.

We know that high and low blood sugars drive negative short- and long-term outcomes – including severe hypoglycemia, retinopathy, neuropathy, kidney disease, and cardiovascular outcomes. Based on 60,000+ hours wearing continuous glucose monitoring (CGM), low-carb eating has nearly eliminated my highs and lows – with less diabetes effort. Here’s my CGM data from the past 90 days:

It helps a bit that I’ve been wearing a do-it-yourself hybrid closed loop system called Loop – this boosts my time-in-range by about five-percentage points per day (+1 hour), on average. However, at the time I finished the book, I was not wearing such a system, and my 90-day data looked quite similar.

In short, low-carb/high-fat has helped normalize my blood sugars, and that brings definite short- and long-term health benefits. These outcomes can be measured and quantified in individuals, alongside any changes in lipid profiles, weight, and blood pressure.

We should also remember that prescribing a diet of 200-300 grams of carbs per day – even filled with “whole grains” and fruit – requires enormous diabetes effort, including counting carbs, calculating doses, tracking insulin on board, and correcting inevitable mistakes when estimates are 20% off. This is often forgotten in diabetes food discussions: how much effort is required to keep blood sugar in range? And if that effort is not applied (e.g., missed boluses), what are the corresponding risks? Eating low-carb, high-fat requires much less diabetes effort, and it minimizes highs/lows when mistakes happen.

In terms of cholesterol/heart disease, I have a longer follow-up column planned on this topic. When I run my own bloodwork through various cardiovascular risk estimators – ASCVD, ACC/AHA, Framingham, Reynolds – my risk is extremely low, even assuming I’m 20 years older than I am right now (age is the biggest driver in these calculators). My HDL cholesterol (57 mg/dl), triglycerides (48 mg/dl), cholesterol ratios, and body mass index (BMI) all suggest low cardiovascular risk. Similarly, Virta recently reported that participants with type 2 diabetes on its very low-carb diet improved 22 of 26 heart disease risk markers – while at the same time reducing medications. (A big driver of heart disease risk reduction is weight loss, and Virta participants lost 12% of their body weight without counting calories.)

1. Cost is consistently underestimated as a barrier!

One of the reasons we’ve been able to get 50,000+ copies out is because we have a free version of the book, and the paperback is priced at-cost ($5.78). Many readers and healthcare providers have thanked us for the free version, as $5.78 for the paperback was a financial barrier. I have a whole new appreciation for cost, especially when a new drug or device or program will cost hundreds or thousands of dollars out-of-pocket.

We need to uplift and empower people with Bright Spots thinking – what’s working and how can we replicate those things? We should also be doing this at a societal level, as our team has done with the dSeries events – what programs work and how can we scale them?

3. We can transform life with diabetes with food, mindset, exercise, and sleep tips.

The improvements with these tips alone can rival some of the newest and most expensive diabetes drugs and devices.

4. Spreading the word about anything “new” requires constant effort and radical creativity.

We’ve been sharing the messages in Bright Spots & Landmines for 52 weeks now, but have only reached a tiny fraction of everyone who might benefit. There is often an “if you build it, they will come” perception in diabetes; this is not true in our experience.

Thank you SO MUCH to all the diaTribe readers who have shared feedback and supported our work! As we consider ideas for Bright Spots & Landmines, what would you most like to see? What would help you the most? What are your big questions? Send me an email with your ideas, or reach out on Facebook or Twitter.