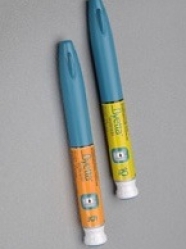 what's behind the Byetta craze?

For an industry that has often promised more than its delivered, Byetta is the first line of a new class of drugs that could transform the therapeutic landscape for type 2 patients.

Byetta was approved by the FDA in April, 2005. In its first year on the market, more than 1 million prescriptions were written by 50,000 doctors. Injected twice a day, Byetta helps patients maintain normal blood sugars, but that alone wouldn't cause a craze. After all, insulin does the same thing, even better.

Byetta's appeal is that it also helps people lose weight, a boon for type 2s. On chat boards, in support groups, and among friends, patients tell nearly miraculous stories of how the product caused them to lose 20, 30, even 40 pounds.

Byetta, however, is not approved as a weight-loss drug, and it can have daunting (albeit temporary for most) side effects, including nausea and vomiting.

The product has quirky origins: it's derived from the saliva of the Gila monster, a deadly lizard found in the American Southwest and now the diabetic community's favorite reptile.

Byetta had a spectacular launch, with more than 400,000 patients having taken Byetta as of late 2006. The biggest problem for the manufacturers - Amylin Pharmaceuticals and Eli Lilly - was, for a short while, that they couldn't meet demand. (They had to advise doctors for a couple of months last summer not to write new prescriptions until they could make more cartridges.)

This frenzy was on display at the ADA's annual meeting in June. At a Friday night symposium on incretin-based therapies like Byetta, hundreds of attendees arrived an hour early at Washingtons Grand Hyatt. Waiting outside the room, they crowded around an escalator and jostled for a place in a line that extended down two floors and into a cocktail party. When the line finally advanced, many were left outside. Some tried to sneak past guards at the door. Arguments ensued. One man cried. Rock concerts have seen less excitement. So we think an explanation of Byetta is in order.

For starters, Byetta works for type 2 patients and can be seen as a kind of lifeline to an overworked pancreas. Type 2 diabetes is thought to occur when the insulin-producing beta cells in the pancreas become impaired. This breakdown often happens in overweight people whose body weight has made them insulin resistant; their stressed-out beta cells can no longer fully compensate for their body's resistance to insulin. Simple aging can also impair beta cell function.

But relatively obscure gut hormone peptides, called incretins, play a role in maintaining normal blood sugars. Specifically, natural incretins are secreted by the endocrine cells of the intestine after meals. This normally enhances insulin release from the beta cells while suppressing glucagon release from the alpha cells, which also lie in the pancreas.

one for the GIP

Two incretins are crucial to improving beta cell function: glucose insulinotropic polypeptide (GIP) and glucagon-like peptide-1 (GLP-1). GIP does not appear to be, alone, a promising treatment, but GLP-1 does affect the beta cells in diabetic patients and therefore has been the focus of research.

One problem is that GLP-1's half-life in the blood is only one to two minutes, because it is quickly broken down by the enzyme DPP-4. However, researchers have found two solutions: development of GLP-1 analogs, which have a very similar structure to natural GLP-1 and provide all the same benefits without being broken down by DPP-4, and the development of DPP-4 inhibitors, which are drugs that prevent the enzyme from degrading natural GLP-1.

In non-diabetic individuals, glucagon is only released from the pancreas when blood sugar levels are low, and glucagon secretion is shut off after meals by insulin and by GLP-1. In those of us with diabetes, however, GLP-1 and insulin levels are low, which results in high glucagon levels.

This combination of hormonal signals mistakenly tells the body that it is starving when it really is not. Thus, the liver continues to pump out glucose, even after a meal, and this is thought to be a major cause of post-prandial (after-meal) hyperglycemia in diabetes.

Researchers also believe that when a person grows (whether during childhood or through weight gain), the beta cells grow to meet that person's increased metabolic needs. Some individuals are able to maintain normal blood sugar even in the most extreme cases of obesity; thus, diabetes only occurs when beta cells cannot maintain the appropriate mass. It is not known why beta cell mass diminishes, and it is still debated whether decreased mass is due to increased apoptosis (cell death), decreased cell replication (growth), or a mixture of both.

Regardless, GLP-1 therapy's effect on beta cell mass could have profound implications. Researchers know that this treatment preserves or increases beta cell mass in rats and mice. Unfortunately, it has been difficult to determine the effects of GLP-1 treatment on human beta cell mass, because it is hard to measure directly how many beta cells we have without taking out some of the pancreas. Additional research is needed to determine if this therapy could actually protect or regenerate beta cells.

For now, two different treatments can enhance GLP-1 function. The first is direct stimulation of GLP-1 receptors by GLP-1 analogs such as Byetta. These GLP-1 receptor agonists (molecules that activate a receptor are called agonists) are small protein fragments. Since small proteins like insulin and GLP-1 are rapidly degraded by our digestive systems, we have to inject these drugs like insulin.

While Byetta's injection was initially seen as a commercial deterrent, consumers have been won over by the drug's powerful benefits: it significantly increases insulin secretion, lowers A1c levels, causes substantial weight loss, and may even promote beta cell growth.

The other strategy on the market to enhance GLP-1 function is the inhibition of DPP-4. Since the DPP-4 enzyme naturally breaks down GLP-1 very quickly, DPP-4 inhibitor drugs prevent the break- down of natural GLP-1 in the body.

names to watch: Januvia and Galvus

The FDA recently approved the first DPP-4 inhibitor, called Januvia, and the agency is expected to approve a second one, Galvus, later this year. DPP-4 inhibitors are taken once or twice a day. In some ways DPP-4 inhibitors have an advantage over the injectable GLP-1 analogs because they are well-tolerated, oral drugs; however, they do not lower A1c levels as much as GLP-1 analogs and they lack the weight loss benefits of GLP-1 analogs - two big benefits in our view.

Byetta and its caveats

A few caveats about Byetta. First, if your A1c is over 8, this drug may not be enough - alone - to help you achieve the ADA's A1c goal of 7.0 or the AACE's goal of 6.5 or lower. Plus, it sounds like targets maybe going even lower - we look for a reduction in 2007!

You might need insulin as well, and a combination of insulin and Byetta is not yet approved, although we expect it to be in the next year or so. You can ask your healthcare team what will work best for you, if the drug sounds intriguing.

Also, you need insurance to get it, because the product is expensive (about $7-8 a day, depending on the dose), though most insurers are covering it (for more than 70% of patients, a normal co-pay of $15 applies). We'll be watching, and we'll report back, so please stay tuned.