Celebrating an Anniversary: The Delicate Dance of a Diabetic Milestone 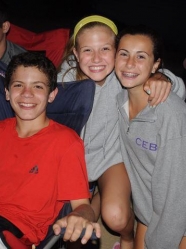 It begins, as these things do, with a simple complaint. “I’m thirsty,” my son tells me. Garrett is 3 years old. I’ve had type 1 since I was a teenager, so I know the symptoms. A couple weeks pass, and Garrett is still thirsty. Late one night, he complains that his stomach hurts. I finally test his blood sugar. “HI” it reads. I drive him through the dark streets of Boston, take him to the ER, and confirm the diagnosis.

On our first day back home, Garrett stands in the driveway, basketball in hand, and asks me, “How long will I have diabetes?”

That was September of 2004. Garrett is now 13, and on September 22, he observes his 10-year anniversary. I say “observe,” because I’m not really sure what we do with such an anniversary.

Do we celebrate it?

Or just ignore it completely?

I can’t speak for other chronic conditions, but diabetes has an interesting history regarding anniversaries. Insulin’s discovery in 1922 transformed the disease from a killer into something that could be managed; but given how crude the tools were – impure animal insulin, the inability to test blood sugars – and given how poorly understood diabetes was, insulin was a rickety crutch on which each patient stood. Survival was still the goal.

So it made sense for Elliot Joslin, who began treating diabetes patients in the 1890’s, to create a Victory Medal. Beginning in 1947, Joslin gave it to any patient who had diabetes for 25 years or longer and was found – after a thorough examination – to be in good health. The medal itself was pretty cool: Embossed on it was the word “VICTORY,” above a three-steed chariot, with the words inscribed at the bottom: “INSULIN EXERCISE DIET.” (Joslin was years ahead of his contemporaries in understanding the essentials of good care.)

Over the years, other medals were created by clinics, health organizations, or companies. Some commemorated 50 years with diabetes; others, on a life well lived. My favorite was another Elliot Joslin medal, introduced in the 1950’s, that featured a boy with his dog in a small boat, the sun setting in the background, and the words: “EXPLORERS OF UNCHARTED SEAS.” Life with diabetes has been and always will be like floating on an “uncharted sea,” each day trying to navigate the waters with imperfect tools, bracing the headwinds. Joslin gave the medal to patients who outlived their “normal life expectancy,” whatever that meant; I’d like to think Joslin simply gave it to those who did their best.

Of course, when your 3-year-old is diagnosed, you’re not thinking about normal life expectancy. You’re just trying to make it through the night. Garrett doesn’t have any bad nighttime lows, but he does have one hypoglycemic experience, at age 7, that requires a call to 911 and an ambulance trip to the ER. It is his only diabetes-related emergency, post diagnosis, so we consider ourselves fortunate.

Garrett, in the beginning, doesn’t like taking shots and one time actively resists an injection in a restaurant bathroom. “I hate diabetes!” he tells us. He starts using the OmniPod system at age 6. It is not perfect – sometimes the pods fall off, other times they deactivate; after one day of several pod changes, he yells, “No more pods!” – but he soldiers on.

At age 5, a friend invites him to a birthday party – a baseball game in Rhode Island. Garrett looks at me with those big eyes to see if I can come also. He understands that there will be food at the game, and he is too young to give his insulin, and without insulin he may not make it home. Not many kindergarteners understand their own mortality. Garrett does.

His main goal in life is to be like all the other kids. At age 9, a documentary filmmaker asks him, “What is the worst part about having diabetes.”

Garrett recalls a birthday party in which he cannot eat the pizza and cake when everyone else can. I am late to give him his insulin, and the parents make him wait. So he sits at the end of the table while the other kids celebrate. The birthday party had occurred two years ago. Some wounds heal slowly.

At 7, he goes to Camp Joslin for kids with diabetes, but by 10, he wants to go to the same sleep-away camp that his big sister attends in New Hampshire. The camp is supportive, so off he goes – much to our fear, but if he wants to be like everyone else, it is time for him to learn. The first summer he goes for three weeks; the next three summers, seven weeks. He water skis, plays basketball, makes new friends, and loves every minute. He experiences some volatile blood sugars (three scones for breakfast will do that), but he carries his diabetes supplies in a red backpack, navigates the high-carb meals and non-stop schedule, and each year becomes more responsible, more resilient, more independent.

Now in eighth grade, he no longer needs me to accompany him. He goes to the movies, hangs out with friends after school, has sleepovers. On his baseball team this fall, a teammate pulls out his black kit that is used for the OmniPod system. A kindred spirit! For the first time, Garrett is not the only kid on his team with type 1. I chat with the boy’s mother, who tells me about her son’s roller coaster numbers and high A1c’s. He was diagnosed at age 8. “He kind of lost his childhood,” she says.

I think Garrett kept his childhood. He has always had good friends who were understanding of his medical needs; he has traveled across the country for vacations and family gatherings; he loves ESPN and action films and science fiction books, and he is becoming increasingly particular about his clothes. (“You don’t have the right look,” he tells me more than once.) Blessed with compassionate doctors and nurses at the Joslin Clinic, he is in excellent health.

And what of his anniversary? We want to recognize his accomplishments, his hard work, his sacrifices, and we offer to buy a special gift of his choosing.

I assume he’s going to ask for a new pair of sneakers, or some clothes, or a video game. Instead, he shrugs.

“Nothing, really,” he says.

I’m surprised, but maybe his indifference is a good thing. Garrett has no memory of life without diabetes, so maybe 10 years with diabetes is just what it is – it’s life. And maybe Garrett has his eyes on a bigger prize.

My brother, Dr. Irl Hirsch, runs the diabetes clinic at the University of Washington in Seattle and is well-known in the field. He also has type 1, diagnosed as a young child, and in July, the Eli Lilly Company gave him his 50-year medal.

When I tell Garrett about his uncle’s award, he does the calculation and says, “That means I’ll be 103 when I get my 100-year medal.”