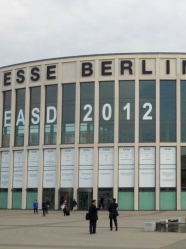 European Association for the Study of Diabetes (EASD) Conference Brings Updates on the Newest in GLP-1, Diabetes Technology and the Artificial Pancreas, and Early Insulin Use

By Alasdair Wilkins and Adam Brown

On September 30, nearly 20,000 attendees – including the diaTribe team! – arrived in Berlin for the 48th annual meeting of the European Association for the Study of Diabetes (EASD). The event featured a whopping 361 oral presentations, 39 symposia, 92 companies and organizations showing off their latest advances at their booths in EASD’s Exhibit Hall, and 1,120 posters offering bite-size insight into a myriad of diabetes-related topics. During our six days in Germany, we learned what’s next for GLP-1 agonists; we gathered some key updates on diabetes technology and the closed loop, and we documented the latest thoughts on the pros and cons of early insulin use.

The Next Frontier for GLP-1 Agonists

Since their first approval back in 2005, GLP-1 agonists like Amylin/BMS/AZ’s twice-daily Byetta (exenatide), Novo Nordisk’s once-daily Victoza (liraglutide), and Amylin/BMS/AZ’s once-weekly Bydureon (exenatide once-weekly) have emerged as popular treatments for type 2 diabetes. This is both because they stimulate insulin secretion only when blood glucose levels are high – effectively sidestepping any increased risk of hypoglycemia – and because GLP-1 agonists typically reduce food intake and encourage weight loss. EASD had several exciting developments for this drug class, beginning with the early word about Intarcia’s ITCA-650.

ITCA-650 is a matchstick-sized implantable device meant to deliver doses of the GLP-1 agonist exenatide without the need for injections, which currently is one of the major drawbacks for this drug class. During regular use, the ITCA-650 device would only need replacement every six to twelve months, and the latest phase 2 studies suggest the device offers better A1c reductions and the same weight loss benefits as the equivalent dose of the twice-daily injectable Byetta. Additionally, ITCA-650 produced a lower rate and shorter duration of nausea than the equivalent dose of Byetta. To our knowledge, the insertion of the device under the skin and its removal are designed to be completed within three to five minutes. Intarcia, the company developing ITCA-650, plans to begin a 4,000-patient, phase 3 study of the product in early 2013. If all goes well, the company hopes to file the device with the FDA by the end of 2015, placing a possible approval in 2016. The company may also investigate the product in people with type 1 diabetes or prediabetes following its approval for type 2 patients.

There was also a great deal of enthusiasm at EASD for combination therapies using GLP-1 agonists and basal insulin (see new now next in diaTribe #42). Eli Lilly sponsored a symposium devoted to this very topic, at which Dr. Tina Visboll of the University of Copenhagen offered a particularly strong endorsement of this combination. There seemed to be little doubt at the conference that the GLP-1/basal insulin combination is here to stay, and indeed is already being widely used. A new combination that we learned more about was Sanofi’s combination of its once-daily GLP-1 lixisenatide and Lantus (insulin glargine). While lixisenatide still hasn’t been given FDA approval, the phase 3 GetGOAL-L study found the combination therapy achieved better A1c reduction than Lantus alone. Moreover, the weight gain typically associated with insulin therapy would be balanced by the weight loss usually seen with GLP-1 agonists. The enthusiasm for all these various applications of GLP-1 agonists suggests we’re on the brink of some significant breakthroughs.

CGM, Insulin Delivery, and the Drive to Close the Loop

We heard about a number of cutting-edge diabetes technologies at EASD. One intriguing device was InsuLine’s InsuPad. In an effort to speed insulin delivery, this wearable patch-like device heats the surrounding skin after insulin injection. Data presented at EASD suggested that InsuPad reduces maximal glucose excursions by 23% compared to a traditional insulin injection. That’s a big difference, and the upshot, according to German researcher Dr. Andreas Pfutzner, is that InsuPad users might require 20% to 30% less insulin than they do currently in order to achieve postprandial glucose control. The one key drawback is that it needs to be changed every day, although the trial data suggest minimal skin irritation. The company is embarking on a larger 160-patient study in type 1 patients after its earlier 56-person type 1 and 10-person type 2 studies, and we look forward to seeing those results.

In the world of continuous glucose monitoring, the big star of EASD was Dexcom’s new G4 Platinum CGM (see test drive in diaTribe #48). We saw preliminary results from Dr. Bruce Buckingham (Stanford University) on a superb nocturnal remote monitoring study at a diabetes camp using the G4 Platinum CGM in pediatrics. Using a USB cable, the G4 Platinum receiver was connected to an Android cell phone, and campers slept with the receiver and cell phone in their cabins. The cell phone sent the CGM data to a central server and to doctors’ computers and iPads at the camp. Patients were randomized to either control nights (no remote monitoring and only scheduled fingersticks to determine hypoglycemia treatment) or remote monitoring nights. Remote monitoring led to a 79% reduction in hypoglycemia events less than 70 mg/dl (seven events vs. 33 events), an impressive 100% reduction in events less than 50 mg/dl (zero events vs. nine events), and an improvement in attendants’ response time to nocturnal alarms.

Next-generation CGM news also came in an outstanding presentation by the esteemed Dr. Roman Hovorka (University of Cambridge, UK), where we learned that Abbott launched its FreeStyle Navigator II two to three weeks before EASD in Europe. As we understand it, the new FreeStyle Navigator II has a slimmer on-body profile and a new receiver design. We’re excited to hear this given the Navigator I’s impressive accuracy and patient and researcher enthusiasm for the device. Of course, since the FreeStyle Navigator I was discontinued in the US in August 2011, we’re not sure if the Navigator II will ever make it to the US. Fingers crossed!

Medtronic’s new PLGM algorithm should reduce the number of hypoglycemic events by 18% and the average duration of these events by 50%, much better than the Medtronic Veo’s 1% and 18% reductions, respectively.

On the artificial pancreas, EASD also brought news from Medtronic. The company released the latest data on its predictive low glucose management (PLGM) algorithm, which will be incorporated into its new MiniMed 640G insulin pump. Using CGM data and smart analytics, the PLGM algorithm will instruct the pump to suspend basal insulin delivery when hypoglycemia is predicted in the next 30 minutes. It will then automatically resume insulin delivery once glucose begins trending back up. Medtronic’s Dr. Barry Keenan shared computer simulation data that indicated the PLGM algorithm should reduce the number of hypoglycemic events by 18% and the average duration of these events by 50%. This is much better than Medtronic’s Veo system, which only offers a 1% reduction in the number of hypoglycemic events and an 18% reduction in the average hypoglycemic event duration. As a reminder, the Veo does not incorporate prediction – instead, it suspends basal insulin delivery only when a hypoglycemia threshold is reached. The US version of the Medtronic Veo, the MiniMed 530G, is expected to be approved in the next six months. The MiniMed 640G, which will incorporate the new PLGM algorithm, is expected to launch in Europe in the middle of 2013.

Insulin Therapies: When Is The Right Time To Start?

Another major topic of debate was the potential benefit of early insulin use for type 2 diabetes. Dr. Jack Leahy of the University of Vermont argued that beginning insulin therapy early in the progression of diabetes should provide better glycemic control than the use of oral agents (e.g., metformin, DPP-4 inhibitors like Januvia, and sulfonylureas like glibenclamide). Moreover, the major problem with insulin use – weight gain and the increased risk of hypoglycemia – can be largely controlled when insulin is taken in conjunction with metformin, or if early insulin use is specifically targeted at people with relatively low A1cs. Oxford’s Dr. Rury Holman made the straightforward point that the vast majority of type 2 patients ultimately take insulin. As such, there is little reason to delay the inevitable, particularly when insulin therapy can allow for quicker attainment of good glycemic control, prolonged beta cell function, and improved effectiveness of oral agents.

This, however, was hardly a unanimously held opinion. Dr. Guntram Schernthaner of the University of Vienna held the opposing view, pointing to the ORIGIN trial as evidence that the benefits of early insulin use are minimal at best – for more on ORIGIN, see the conference pearls on ADA in diaTribe #44. Give the lack of clinically demonstrated benefit, Dr. Schernthaner argued the weight gain and hypoglycemia overwhelm any potential benefits.

Even speakers who were broadly in favor of earlier insulin therapy expressed reservations on practical grounds. The consensus at one panel discussion suggested that the negative outlook toward insulin on the part of both diabetic patients and their care providers represents a significant obstacle to its increased use. We believe that early insulin use may be beneficial in certain patients, though there are certainly obstacles to be overcome. Fortunately, new insulin delivery technologies, such as Valeritas’ V-Go, Calibra’s Finesse, and several others in development, will make insulin use much easier for type 2 patients.