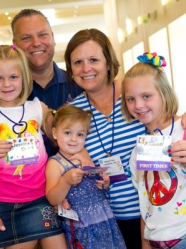 The 2012 International Children with Diabetes Conference – Friends for Life

“What in the world are we doing in Orlando in July when it’s hot, humid, and overrun with tourists? We’re here because we want to make a difference in the life of someone we love.” With those words, Jeff Hitchcock (Founder, Children with Diabetes) opened the 2012 International Children with Diabetes Conference – Friends for Life (FFL). This is one of our favorite conferences because the vibe is so different – children, teens, and adults with diabetes and their families gathering together to learn from brilliant faculty, share best practices, and have an absolute blast every summer. This year’s conference had over 3,000 attendees, including a whopping 800 first-timers, several hundred type 1 adults, and even a few celebrities with type 1. We attended a number of excellent talks at FFL, including two from diaTribe contributor and CDE extraordinaire Mr. Gary Scheiner (Integrated Diabetes Services, Wynnewood, PA) that stood out as particularly helpful for patients: one on addressing hypoglycemia, the other on tackling after-meal hyperglycemia.

In one of our favorite talks of the conference, Mr. Scheiner gave an outstanding review of hypoglycemia prevention and treatment. He focused on measuring lows, strategies to minimize them, and planning for proper treatment. This talk was full of gems for patients looking to minimize and manage hypoglycemia:

2) Have an insulin program that makes sense. The foundation of success is a proper basal insulin program, which can be evaluated by doing fasting basal tests (see thinking like a pancreas in diaTribe #26). A proper correction factor is also essential – Mr. Scheiner emphasized that most people need different correction factors at different times of the day. As an example, Mr. Scheiner explained that most people are more insulin resistant in the morning, meaning they would need more insulin to drop their blood sugar the same amount. As a starting point, he looks at a patient’s total daily insulin dose and divides that by 1500 (aggressive) or 1800 (conservative). These should then be refined over time with experience.

3) Use a continuous glucose monitor (CGM). Mr. Scheiner recommended setting a CGM low alarm at 80-90 mg/dl – this way, the CGM alarm will go off before a low is reached. To read our trials of CGM products from Medtronic and Dexcom, please see test drive in diaTribe #32 and test drive in diaTribe #15. We look forward to newer, more accurate CGMs from Dexcom and Medtronic, which should be available within the next year (both are currently pending FDA approval).

4) Account for insulin on board properly (i.e., insulin that has been taken but has not dropped blood sugar yet). To avoid hypoglycemia, insulin on board should be deducted from correction boluses. Mr. Scheiner recommends using the following as a guide. (Note that if you use an insulin pump and enter your current blood sugar into the bolus calculator, the pump will subtract insulin on board automatically. However, different pumps do this differently. For more, see thinking like a pancreas in diaTribe #22.)

5) Accurate carb counting. Since fiber does not raise blood glucose, Mr. Scheiner recommended subtracting 100% of fiber if it’s over five grams. However, patients should only subtract 50% of the carbs in sugar alcohols, as these still raise blood sugar.

8) Frequently monitor. Mr. Scheiner stated, “The longer you go between blood glucose checks, the greater the risk of hypoglycemia.”

9) Keep good records. To help prevent lows in the first place, it’s important to understand what’s causing them. Mr. Scheiner recommended keeping track of carbs, insulin, activity, and emotional levels. In his view, the key is to review every 7-10 days and look for patterns. Harkening back to earlier in his talk, he defines problem areas as times of the day where more than 10% of glucose readings are below target range.

A) Body size makes a big difference in treating hypoglycemia. Larger individuals need more carbs to correct blood sugar compared to smaller individuals. Mr. Scheiner displayed a comprehensive table with recommendations based on glucose level and body weight (available at http://bit.ly/SM6xtE) – for example, the table showed that someone under 40 lbs needs approximately eight grams of carbs to correct a blood glucose in the 50-59 mg/dl range, while someone over 220 lbs needs approximately 30 grams of carbs. These general guidelines are a good starting point and should be adapted over time with experience.

Mr. Scheiner followed up his excellent talk on managing hypoglycemia with a discussion of how to “strike the spike” – managing hyperglycemia following meals. He gave a number of practical lifestyle and medicinal approaches to controlling post-meal highs:

1) Test blood sugars one hour after eating. Mr. Scheiner explained that this is when blood sugars tend to reach their peak.

3) There are a number of food-based strategies associated with lower glucose levels after meals:

E) Eat vegetables before starches when having mixed meals.

F) Make lunch the highest carb meal of the day.

4) There are also a variety of medicinal approaches to preventing after-meal hyperglycemia:

A) Use rapid-acting insulin (e.g., Humalog, Novolog, and Apidra) instead of regular insulin.

B) Take boluses prior to meals. Mr. Scheiner explained that it takes rapid-acting insulins about 20 minutes to start working, around one hour to peak, and around three to four hours to finish lowering blood sugar.

C) Try Symlin (a synthetic derivative of the hormone amylin). Mr. Scheiner cautioned, however, that the drug can lead to nausea, it must be injected, and insulin doses must be adjusted or delayed. For more information, see our test drive of Symlin in diaTribe #2 and thinking like a pancreas in diaTribe #20. As a reminder, amylin is usually released in conjunction with insulin – especially after eating – because it helps the body maintain flatter blood sugar profiles. It does this in three ways: by slowing gastric emptying (allowing sugar to enter the bloodstream more slowly), making people feel full more quickly and thus eat less, and inhibiting post-meal secretion of glucagon, a hormone that makes the liver release extra sugar into the bloodstream.

D) Try GLP-1s (e.g., Victoza, Byetta, and Bydureon). Although these drugs are only FDA approved for use in type 2 diabetes, Mr. Scheiner explained that GLP-1s are being used by a lot of people with type 1 diabetes (for one example, see our test drive of Victoza in diaTribe #26). We were encouraged to see that Novo Nordisk recently completed a 42-patient phase 1 trial investigating the use of Victoza in type 1 diabetes. We expect that over the next few years, more data on GLP-1 use in type 1 diabetes will be published.