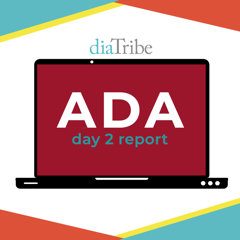 Check out the second day highlights from ADA’s virtual 80th Scientific Sessions – including new insights on Farxiga for diabetes prevention, soda taxes, the gut microbiome and type 1 diabetes, and more!

While the move to virtual is definitely an adjustment, ADA’s 80th Scientific Sessions are going well! Here are our highlights from day two of the biggest diabetes conference of the year. Click here to read our day one highlights.

The Use of CGM in Type 2 Diabetes — Is There Value?

Continuous glucose monitoring (CGM) has been a revolutionary tool; it gives people real-time updates on their blood glucose levels that can help to increase time in range (TIR). For most providers in diabetes, the value of CGM is now nearly universally supported (either “real-time” or “professional CGM”) even if all people with diabetes can’t get it. Reimbursement throughout much of the world has reinforced the value of CGM in type 1 diabetes almost everywhere, though the value of CGM for people with type 2 diabetes is still being explored. 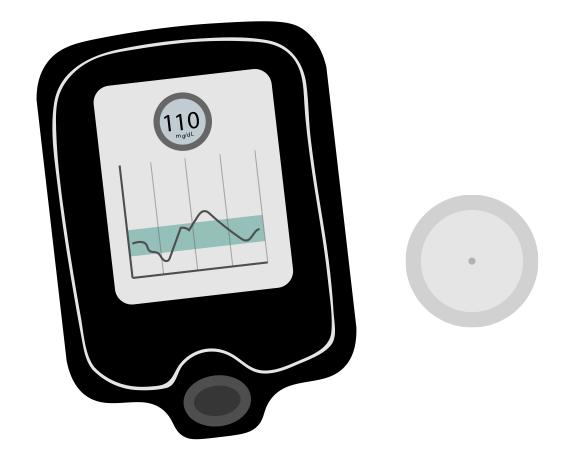 Dr. Philis-Tsimikas argued for CGM for type 2 diabetes given the technology’s ability to offer remote solutions for care management, provide direct feedback of behavior modification, and allow evidence-based changes to drug therapies. Dr. Philis-Tsimikas shared data from several CGM studies in people with type 2 diabetes on a variety of therapies (basal insulin alone, and oral and other medications), highlighting the improvement in clinical and behavioral outcomes. In what could be the most exciting set of results, people with type 2 diabetes who used real-time CGM (RT-CGM) intermittently for 12 weeks showed an average A1C reduction of 1 percentage point at the end of 12 weeks (compared to a 0.5 percentage point reduction in the blood glucose meter control group). During the 40-week follow up period, A1C was still significantly lower in the RT-CGM group.

Dr. Elbert Huang gave what we felt was a less persuasive view. He argued that in most cases, CGM use is not valuable for people with type 2 diabetes, on the basis of cost. Howerver this is based on outdated data – just yesterday at ADA, there was striking Late-Breaker data presented that showed very meaningful reductions in A1c by Dr. Eden Miller and Dr. Gene Wright (he’ll be speaking at the TCOYD/diaTribe Forum Monday night!) The study showed very meaningful A1C reductions in thousands of people with diabetes – starting A1C was 8.5%, which fell to 7.6% to 7.9% depending on the population. Dr. Huang presented two studies that showed that the cost ratio of CGM was different depending on the assumptions of costs related to the quality and quantity of lives impacted by type 2 diabetes. A QALY, by the way, is a “quality adjusted life year” that measures both quantity and quality (based on disease burden) of life years. We also strongly believe that many people become more engaged in their diabetes management due to a variety of factors that reduce stigma (no fingerstick tests required, etc.) and enable them to focus on how data and technology can work together to improve their results.

Dr. Huang suggests that less costly treatments (such as the use of ACE inhibitors to avoid high blood pressure or to prevent kidney disease) might be better areas of focus and certainly all experts would agree that focus here is important as well. He also mentioned potential negative psychological effects of constantly checking blood glucose readings using CGM and the fact that this technology may only work if it is shared with a person’s healthcare team – we agree integration with healthcare teams where available is a valuable point and also emphasize our learnings from ADA 2020 from many providers that emphasize, as Dr. Diana Isaacs did on Saturday, that CGM enables greater interest in diabetes management by people. While the technology is extremely important, Dr. Huang also expressed that it could be more valuable if the price of CGM declines or if it is shown to improve glucose management while also reducing the need for costly medicines, among other factors – these factors of cost are extremely important. CGM is going down in price on average and global pricing of $109/month is already available from FreeStyle Libre all over the world. While no one should have to pay $3/day on their own, we believe many more health systems are interested in investing more here due to the positive results they are seeing. We’ll be back with more data from the ADA 2020 Scientific Sessions on this and related fronts!

Yale’s Dr. Silvio Inzucchi presented an analysis of the landmark DAPA-HF trial, suggesting that along with the heart health benefits of SGLT-2 inhibitor Farxiga, an additional benefit of preventing type 2 diabetes also exists.

As background, DAPA-HF examined the heart health effects of Farxiga (spelled Forxiga in Europe) in people with and without type 2 diabetes. The trial showed that:

Dr. Inzucchi’s new analysis showed that for participants who did not have type 2 diabetes at the start of the trial, treatment with Farxiga reduced the risk of developing type 2 diabetes by a whopping 32% compared to placebo. After 18 months, 4.9% of the Farxiga group had been diagnosed with diabetes compared to 7.1% of the placebo group. This is a big deal and anyone you know at high risk of type 2 diabetes should learn about these results and talk to their doctor or healthcare team.

We’re glad to see this important benefit – type 2 diabetes prevention – may be conveyed to people with heart failure who can now take Farxiga regardless of whether or not they have type 2 diabetes. As a reminder, Farxiga is the first SGLT-2 inhibitor drug to be approved for a non-diabetes specific population.

Soda Taxes: Are They Working?

Dr. Lisa Powell (University of Illinois at Chicago) presented compelling evidence in support of sugar-sweetened beverage (SSB) taxes and their ability to reduce soda consumption. Evidence suggests that taxes do reduce the consumption of sugary beverages – a 38 percent reduction in Philadelphia, PA and 21 percent reduction in Seattle, WA, for example – and incentivize soda companies to decrease the amount of sugar in their products, especially when the tax is dependent on the drink’s sugar content. Research also shows that while some consumers replace sodas and sugary drinks with other forms of sugar, such as candy or chocolate milk, the most common substitute is water. 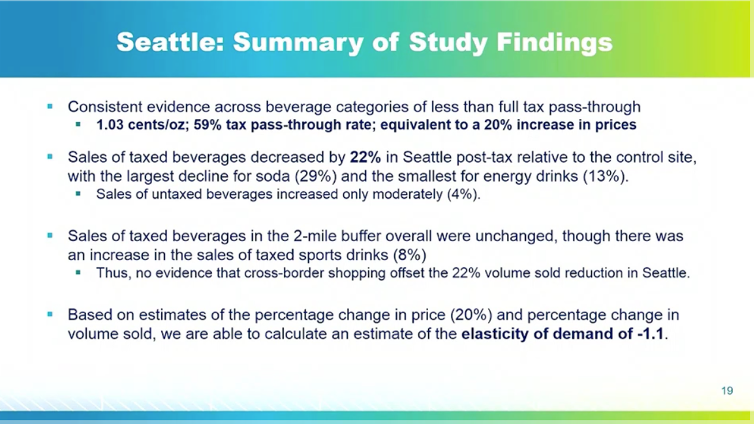 Dr. Martin White (University of Cambridge) and Dr. Rafael Meza (University of Michigan) presented promising data on how SSB taxes are working in the United Kingdom and Mexico, respectively. UK consumers overall have been switching to drinks with less sugar and most companies have been reducing levels of sugar in their products; however, taxes have not had a dramatic negative impact on the sugary beverages industry’s revenues overall. Similarly, Dr. Meza showed that Mexico’s overall sugar consumption has decreased since the implementation of the SSB tax, having the largest influence on people who drink lots of sugary drinks, and he noted that the current tax, which is about 10% of the beverage price, would have a significantly larger impact if doubled.

Dr. Powell pointed out that the most effective taxes require careful design. To significantly curb consumption of sodas, the SSB tax should be added into the shelf price, rather than applied at the register, and the tax ought to apply to a broad base of sugary-drinks (including sodas, juices, sports drinks, etc.) to avoid substitutions. Moreover, researchers must be mindful of cross-border shopping – this is when consumers purchase their beverages in places where the SSB tax doesn’t apply. This tax avoidance can heavily impact the effectiveness of the tax: for example, in Philadelphia, PA, consumers buying SSBs outside of Philly reduced the the impact of the tax from a 51% reduction in SSB sales to a 38% reduction. 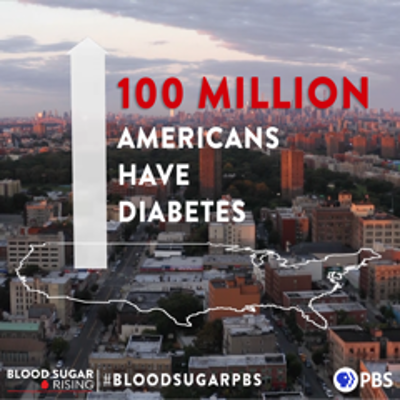 A Sneak Peek into the Film Blood Sugar Rising 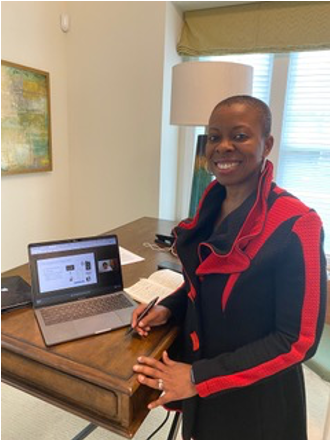 Many myths exist in diabetes. One is that if you get diabetes, it is your fault. Blood Sugar Rising dismantles some of these false narratives by showing the complexity of the disease and amplifying diverse voices of people in the diabetes community. Watch the film here if you are in the US and here if you are outside the US.

Tracey Brown ended with a powerful call to action: “What will we do when the burning bush stops burning? We need to move from words into action. We get one point for saying and nine points for doing. Each of us can use our voice, our monetary power, and our ears, and reach across the aisle to collaborate. This is what we need to do to bring diabetes down. We can make it happen, but only together. I’m full up of hope and courage that tomorrow is going to be better than today.”

Dr. Emma Hamilton-Williams shared unpublished research on the effect of high-fiber dietary supplements on gut microbiome composition and diabetes management in 18 adults with type 1 diabetes. Fibrous food breaks down into short-chain fatty acids (SCFAs) when digested. SCFAs are known to support gut health and regulate the immune system. The study found that the high-fiber supplements affected the species of bacteria living in the gut as well as their function (though these returned to baseline after the diet ended). Participants with better-managed diabetes at baseline had a stronger response to the dietary change – and experienced changes in their glycemic management: A1C levels decreased and less daily insulin was required. Further research on short-chain fatty acid supplements could shed lead on diabetes treatment and prevention.

A Debate on the Use of Sulfonylureas in Type 2 Diabetes

Sulfonylureas, or SUs (drugs like glimepiride, glipizide, gliclazide), are a commonly prescribed low-cost drug for people with type 2 diabetes across the world. At ADA 2020, experts Dr. Sophia Zoungas and Dr. Carol Wysham debated the role of SUs in the treatment of type 2 diabetes. While the two endocrinologists differed on how to interpret data from various studies, we came away from the debate with several important take-aways.

If you do use an SU, and have experienced hypoglycemia or weight gain, we encourage you to ask your healthcare professional if there is an alternative. To increase safety, we encourage you to check blood sugar as often as you can (or start using a continuous glucose monitoring device, if you can get access – see here if you are on Medicare) to minimize the risk of hypoglycemia.