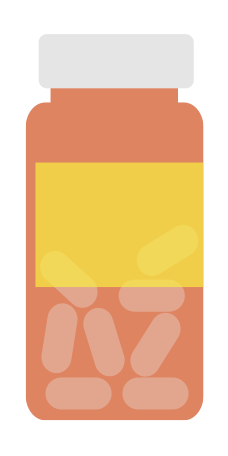 Day three of ADA’s Scientific Sessions brought incredibly interesting research, and found us settling into the new virtual format. You can read our highlights from day one here, and from day two here. 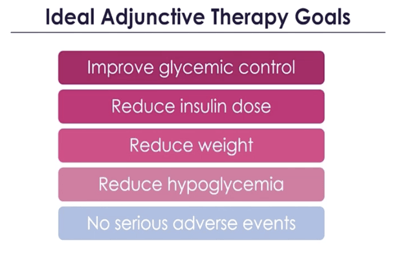 Dr. Hramiak kicked things off discussing the current challenges and risks of insulin therapy, including hypoglycemia, weight gain, glucose variability, and diabetic ketoacidosis (DKA). According to data from the T1D Exchange, average A1C levels have not improved in the last decade, and adolescents continue to be a difficult group for glycemic management, despite increased use of pumps and continuous glucose monitors (CGM). How can adjunctive therapies (added to insulin) help?

The REMOVAL study looked at the effects of metformin in people with type 1 diabetes (40 years of age or older). Over three years, participants taking metformin saw the following benefits compared to those taking a placebo:

These data suggest that metformin did not have a clinically meaningful impact on glycemic management but may improve cardiovascular health in adults with type 1 diabetes. That’s disappointing, but something we’ve all wondered for years – now we know!

Dr. Vilsboll continued the conversation by discussing GLP-1 agonists for type 1 diabetes. She reminded that adjunctive therapy has several important goals but does not replace insulin – which is the main treatment for people with type 1 diabetes.

Dr. Vilsboll provided an overview of the effect of GLP-1 drugs in the pancreas (on insulin-producing beta cells), liver, brain, kidneys, and other organs before sharing data from a trial on GLP-1agonists in type 1 diabetes.

The LIRA-1 Study evaluated 24 weeks of GLP-1 agonist use in people with type 1 diabetes and excess weight and found that GLP-1 treatment:

The ADJUNCT trial was the longest such trial, involving 1,400 people with type 1 diabetes with an A1C between 7%-10%. In this trial, participants taking GLP-1 agonists experienced:

In a more recent trial, MAG1C, researchers examined the use of GLP-1 agonist exenatide (Byetta) over 26 weeks in adults with type 1 diabetes. Researchers found that compared to placebo, the GLP-1 agonist did not decrease A1C but did decrease insulin dose and body weight. Researchers concluded that the GLP-1 agonist does not have a future as an add-on treatment to insulin in type 1 diabetes. We are not certain this is the correct answer, because it seems like TIR would’ve been useful to measure – but, there’s no fighting city hall.

The session concluded with Dr. Chantal Mathieu discussing the role of SLGT-2 inhibitors in people with type 1 diabetes. She pointed to three main trials: DEPICT with Farxiga, InTANDEM with Zynquista, and EASE with Jardiance.

The inTandem trial also showed a drop in A1C: after 24 weeks, participants taking Zynquista experienced a 0.5 percentage point drop in A1C compared to those taking placebo. Time in range also increased with Zynquista. There was a 77-minute increase in time in range with the 200 mg dose, and almost a three-hour increase for people taking the 400mg dose. The increased risks of DKA and genital infections were also observed in this trial.

The EASE trial provided evidence that supported the effects of SGLT-2 inhibitors on the reduction of A1C – about 0.3-0.4 percentage points after 52 weeks. This study also used a much lower dose of 2.5 mg, which offered an intermediate effect – lowering A1C by about 0.2 percentage points and reducing body weight by 4 lbs (1.8 kg). Interestingly, there was no difference in DKA with the 2.5 mg dose compared to placebo.

Dr. Mathieu concluded by sharing her “bottom line” on the use of SGLT-2 inhibitors in type 1 diabetes and preventing DKA.

To learn more about off-label drugs in type 1 diabetes, check out this article from Kerri Sparling.

In a fascinating session on type 2 diabetes remission, several leaders in the field introduced data on how specific lifestyle interventions (diet and exercise) may help put type 2 diabetes into remission.

Alison Barnes presented data from the DiRECT trial, which focused on low-calorie diets (LCD). The trial compared an intervention group on an LCD (between 800-900 calories per day) to a control group receiving typical diabetes care. Remission was defined as achieving an A1C below 6.5% and stopping all diabetes medications. Results from the DiRECT trial were promising:

We thoroughly recommend Dr. Roy Taylor’s book Life Without Diabetes: The Definitive Guide to Understanding and Reversing Type 2 Diabetes – he provides a major connection to the DiRECT trial.

Next Dr. William Yancy spoke on low-carbohydrate diets (classified as less than 130 g carbs per day, with no overall calorie restrictions). In an analysis that compared the effects of nine different diets on glycemic outcomes in type 2 diabetes, the low-carb diet was ranked as the most effective dietary approach for lowering A1C.

Finally, Dr. Kristian Karstoft presented the U-TURN study on how exercise alone, or exercise and diet, may play a role in type 2 diabetes remission. U-TURN had two groups, one receiving standard care and one receiving intensive lifestyle intervention, which included diet and exercise components.

Overall, parents felt that Loop had a positive impact on their family’s lives. They reported the following outcomes:

Dr. Anastasia Albanese-O’Neill presented survey results on what parents expect of school and diabetes camp staff to help their children manage their DIY closed-loop system. School nurses were also surveyed on their opinions regarding DIY. Here are some highlights:

This suggests a need for training on DIY and diabetes technology for school and camp staff.

What Therapies Are Best for People with Type 2 Diabetes at Risk of Heart Disease?

The world of diabetes is now focusing more than ever on preventing diabetes-related health complications. Not only is the treatment of diabetes about blood sugar (measured by A1C or time in range), but it is also about heart health, kidney health, and so much more. In 2019, data from large trials showed that GLP-1 agonists and SGLT-2 inhibitors have heart and kidney protection benefits.

As such, experts strongly emphasized using GLP-1 or SGLT-2 drugs for individuals at high-risk for heart attack, stroke, heart failure, or chronic kidney disease. They also named that GLP-1 and SGLT-2 therapies should become more accessible and affordable to people living with diabetes.

Studies have not yet evaluated the heart and kidney health benefits of metformin, compared to those of GLP-1s and SGLT-2s. However, trials have shown that metformin helps lower blood glucose and body weight, comes with a low risk of hypoglycemia, and is cost-effective.

If your healthcare professional has not brought up additional therapy options for you, we recommend you ask them to read this article and discuss your options.

Dr. Neesha Ramchandani presented her work on young adults living with diabetes (ages 18 to 30). Through interviews, she found four main challenges: finding a balance between diabetes and life, feeling in control of diabetes, navigating the hidden burden of diabetes within their social circles, and wanting a better connection with their diabetes healthcare professional. One participant said, “Diabetes is like having a full-time job… you can’t 100% turn off. It always has to be a part of your thought process.” diaTribe has resources for teens here.

We then heard from Dr. Della Connor and Dr. Gary Rothenberg on the need to care for people who are living with diabetes post-kidney transplants and post-amputations. In all three talks, the experts emphasized the need to:

A group of educators made a strong case for the greater use of diabetes self-management education and support (DSMES). The benefits are many, including improvements in clinical, behavioral, and psychosocial outcomes, and greater diabetes knowledge and self-care behaviors. Dr. Margaret Powers stressed that compared to other treatments prescribed by healthcare professionals, DSMES and medical nutrition therapy produce few to no negative side effects for people with diabetes and are low cost.

The experts discussed low DSMES participation rates across the nation and the factors that reduce referrals to diabetes education. Evidence shows that less than 5% of people newly diagnosed with diabetes who have Medicare insurance, and 6.8% of privately insured people with diabetes, have used DSMES services. The 2020 DSMES Consensus Report was created to address these concerns by outlining steps healthcare professionals can take to help people access DSMES services. The report recommends that healthcare professionals make referrals and encourage participation in DSMES at four critical times in someone’s diabetes journey: (1) diagnosis, (2) annually or when not meeting treatment targets, (3) when complicating factors develop, and (4) when transitions in life and care occur. It also suggests that awareness of, and access to, DSMES must be expanded (culturally and geographically), and financial support should be provided for use of DSMES services.