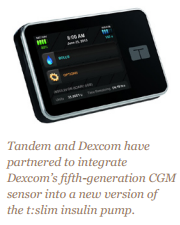 In early February, Tandem Diabetes Care – the manufacturer of the t:slim insulin pump – announced plans to build a new version of the t:slim that can sync up with Dexcom’s fifth-generation continuous glucose monitoring (CGM) sensor (note that the currently available Seven Plus is the third-generation sensor). With the new device, users will be able to both dose their insulin and monitor their glucose sensor data using a color touchscreen.

Unfortunately, this Tandem/Dexcom product won’t be approved for at least two years, perhaps three. The standalone t:slim pump is set to launch in the US in the first half of 2012. Meanwhile, the fifth-generation Dexcom sensor, which will also feature open connectivity to devices like smartphones, tablets, and computers, is on track for FDA submission in mid-to-late-2013. The combination Tandem pump/Dexcom fifth-generation CGM product could be filed 100 days later, and the actual FDA review process typically lasts about six months. Thus, we expect the Tandem/Dexcom product will be available around mid-2014 at the earliest. (A similar timeline applies to the CGM-integrated pumps being built by Roche, Dexcom’s second-most-recently announced partner.) In the nearer term, Dexcom is continuing to move ahead with its fourth-generation sensor, which will offer notable accuracy and reliability improvements over the Seven Plus. The major trial to get the sensor approved was just completed, and we expect it could be on the market as soon as late 2012/early 2013.

To learn more on pump/CGM development, see past diaTribe articles on the Medtronic Paradigm REAL-Time Revel (the only combo product currently available in the US), the Animas Vibe (an upcoming system that unites the Animas Ping with Dexcom’s fourth-generation CGM, currently available in six European countries with a slightly earlier-generation sensor), and a combination product featuring the Insulet pump and the Dexcom CGM (an upcoming integration of the second-generation OmniPod and the fourth- or fifth-generation Dexcom CGM will be coming soon). –JS/AB