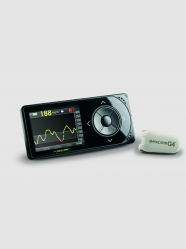 In February, Dexcom submitted an application to expand the label for the G4 Platinum CGM (continuous glucose monitor) to pediatric patients who are as young as two years old. The FDA normally responds to these applications after 180 days, and we expect a decision from the agency during the second half of 2013. Currently, the G4 is only approved for those who are 18 years and older. Though some children are now using the CGM, they are using it “off-label,” and not all healthcare providers (HCPs) are comfortable prescribing therapies in this way. CGM can be a tremendous help for improving glycemic control and avoiding hypoglycemia (see conference pearls from diaTribe #51), and most HCPs and researchers believe the G4 Platinum is currently the most accurate CGM on the US market. This approval would give greater access to children who currently have difficulty getting a prescription for the G4.

Dexcom is also working on a new remote monitoring product, Dexcom Share. The product is a cradle that holds the G4 Platinum receiver and plugs into a power outlet at a user’s bedside. Data from the G4 Platinum are then sent via the cradle (using Bluetooth) to a nearby smartphone. That phone then uploads the data to a web-based platform, where it can be monitored by parents or caregivers on their own cellphones. At the ATTD conference, Dexcom showed a picture of a father on a business trip in a taxi, checking his phone with a sigh of relief that his daughter’s CGM reading was 150 mg/dl. Dexcom’s goal is to submit Dexcom Share to the FDA in the second half of 2013, meaning it could be on the market in 2014. Dexcom Share is similar in concept to Medtronic’s FDA-approved remote monitor mySentry – the key difference is that Share will send CGM readings to smartphones and the web, while mySentry sends pump and CGM readings to a bedside monitor within 50-100 feet.–MN/AB