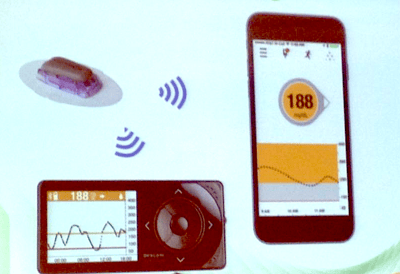 In its February financial update, Dexcom announced the filing of its much-anticipated Gen 5 mobile system with the FDA. Assuming things go well, we would be cautiously optimistic for approval before the end of the year. The system will include a new Bluetooth transmitter, an iPhone app (the Android app is in development), and an optional Share receiver. Most notably, Gen 5 will bring CGM data straight into the phone app via Bluetooth, eliminating the requirement for a receiver. Based on screenshots we saw in January, the app’s design and display have been significantly revamped from the G4 Platinum receiver. Gen 5 will use the same G4 Platinum sensor and the just-launched Software 505 (“G4AP algorithm”). Notably, the company is working with Apple on a Watch app for the existing Share system, as well as for Gen 5 – the first version is expected out around April.

Dexcom’s G4 Platinum Share receiver, which received FDA approval in January, is expected to launch early this month and will be given to all patients moving forward. The new receiver will have built-in Bluetooth and can communicate wirelessly with the Dexcom Share app on any nearby iPhone or iPod touch - no docking cradle required. In-warranty users will be able to upgrade to the new Share receiver for $199, and those who are buying a receiver this year or who have a Share cradle will be able to get a free upgrade. After the Gen 5 and new transmitter become available, patients will need a simple remote software update to make the Share receiver compatible.

On the status of pump integration, Animas started shipments of the Vibe in the US (you can read our test drive on the integration here), and Tandem is preparing for launch of the t:slim G4 in the second half of this year. Neither pump is compatible with the new G4AP algorithm or the G5 transmitter. Longer term, many eyes are on the field of artificial pancreas development and how Dexcom will engage with companies and academic partners like UVA, the Bionic Pancreas, and the DREAM group.  Although Dexcom’s management hasn’t given any specific updates on this front, the company is committed to making its CGM available for closed-loop systems. -NL