Diabetes Treatments: The Road Ahead 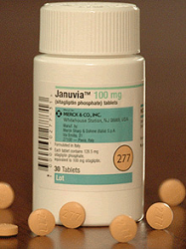 For about half a century, physicians treated type 2 diabetes by giving insulin or increasing the body's insulin production with drugs called sulfonylureas. However, over the past 10-15 years, scientists have gained a much better understanding of the biology of diabetes, resulting in an explosion of new diabetes treatments. Just in the last two years, two entirely new drug classes, GLP-1s and DPP-4 inhibitors, have been introduced. These are better known to patients through the names of Byetta and Januvia, two new drugs for patients with type 2 diabetes. In spite of improved therapies, managing diabetes remains difficult for many people, and over 40 percent of the people in the US with diabetes are still not at the ADA's recommended A1c goal of 7.0 percent or less. Treatment goals have dropped lower and lower in various organizations, with the AACE (American Association of Clinical Endocrinologists) and the IDF (International Diabetes Federation) agreeing that people should strive for an A1c of 6.5 percent or lower. Furthermore, many patients simply do not respond well to currently available treatments. Fortunately a host of new therapies are on the way, and some of them approach diabetes from completely new angles. These therapies may offer improved efficacy, tolerability, and convenience, allowing more patients to reach A1c goals. Here's one quick look at the road ahead:

If the name “Byetta” sounds familiar, that’s because it is already available at a pharmacy near you - we wrote about it in our first issue of diaTribe. Byetta, which has been available since May, 2005, has certain advantages over other available therapies - it causes an A1c drop of between 0.8 percent and 1 percent (and a drop of 1.5 percent in a recent study), promotes weight loss, is not associated with hypoglycemia, and is fairly well tolerated. Evidence from animal studies suggests that it may also help to protect beta cells (the insulin producing cells of the pancreas), thereby slowing the progression of diabetes, though this is not yet proven in humans. Today, it must be taken two times a day as a pen injection - it is not available for use with a syringe and vial.

For all of these benefits, one disadvantage of exenatide once-weekly is that the needle will be bigger than Byetta's, and with the earliest generation of this treatment, there may be additional hassle in assembling the injection - though we think that many patients will welcome the tradeoff. Given its ability to protect beta cells we also believe that exenatide once-weekly may eventually prove very successful in not only treating diabetes but also in possibly preventing progression to diabetes from impaired glucose tolerance (pre-diabetes). Exenatide once-weekly should be available to patients by 2010, if not earlier.

Another future drug in the GLP-1 class is the GLP-1 class is liraglutide, which is being developed by Novo Nordisk, the manufacturers of Novolog and Levemir insulins. Like exenatide, liraglutide lowers A1c, causes weight loss, is well tolerated, and does not cause hypoglycemia. Liraglutide will be a once-daily injection, but the injection needle will likely be considerably smaller than that of exenatide once-weekly .

The GLP-1 class of drugs has really piqued our interest, and we believe the class will continue to advance far into the future. After liraglutide and exenatide once-weekly reach the market, there is talk of a once-weekly form of liraglutide, new and improved GLP-1s, and even inhaled GLP-1 drugs. Many of the pharmaceutical juggernauts - Amylin, Eli Lilly, GlaxoSmithKline, Novo Nordisk, and Roche, among others - have placed big bets on this drug class, and they are likely to push GLP-1 therapy in new and improved directions. dpp-4 inhibitors: januvia and beyond

If the GLP-1 class of drug described above looks promising, one ought to also take a look at what's called the DPP-4 inhibitor class - that stands for dipeptidyl peptidase-4 inhibitor - what a mouthful! DPP-4 is an enzyme that destroys GLP-1 as well as another similar gut hormone called GIP. By blocking DPP-4's effects, DPP-4 inhibitors indirectly increase GLP-1 and GIP hormone levels. One advantage of these drugs is that they are taken as a pill and to date appear to be very well tolerated by most patients. They are generally weight-neutral, which means they don't cause weight gain or weight loss. DPP-4 inhibitors taken alone (in "monotherapy" is the lingo) tend to be less effective than GLP-1 drugs in terms of lowering A1c, but they appear to work very well when they are used in combination with metformin. And they can be taken just once daily by many patients - twice-daily by most - so they are seen as quite easy to take by many doctors.

In the US, the first DPP-4 inhibitor, Januvia, from Merck Pharmaceuticals, was approved in October 2006. Another DPP-4 inhibitor called Galvus has been approved in Europe and may be coming to the US, although recent safety issues have prompted a delay. These safety issues are thought to be "compound-specific" to Galvus, and not the entire DPP-4 class. At least a couple of other DPP-4 inhibitors from Takeda and Bristol-Myers Squibb/Astra Zeneca are expected to enter the market in the next year or two if no other safety issues arise. All of these drugs are likely to be similarly effective because they all work the same way. Although nearly a million patients are using Januvia at this point, there is very little long-term safety data because the drug is so new. Although the same is true for GLP-1 drugs, that class of drug has been on the market for about 18 months longer; many experts also feel that the GLP-1 class is inherently safer because it is mimicking a natural hormone, whereas there is the potential for off-target effects from DPP-4 inhibition. The safety of both the DPP-4 and the GLP-1 class is being carefully studied as more data is accumulated with time.

Avandia and Actos are the only two approved drugs that directly increase insulin sensitivity or reduce insulin resistance, which has been termed the first defect of diabetes. They belong to a drug class called peroxisome proliferator-activated receptors (commonly referred to by diabetes researchers as PPARs). These drugs can be very effective at controlling blood glucose over the long term, but they are also associated with serious side effects including weight gain, edema (swelling), bone fractures, and congestive heart failure (the inability of the heart to pump blood to the body's organs). Furthermore, it is possible that Avandia, but not Actos, may increase a person's risk of having a heart attack. See Learning Curve in diaTribe issue 6 for more information about Avandia and Actos.

With these safety concerns, there is strong interest in developing a safer insulin sensitizer, and no fewer than 16 of such drug candidates are currently in clinical testing. These second generation PPARs are expected to be more precise at hitting biological targets that lower blood glucose, while avoiding the targets responsible for Avandia and Actos' side effects. For this reason, the new PPARs are not likely to be much more effective than Avandia and Actos, but they are expected to be much safer - that's a win in our view.

also around the corner: sglt-2 inhibitors

When your blood sugar is high, have you ever wanted to just pour glucose directly out of your bloodstream? That's sort of what drugs in the SGLT-2 class purport to do. When working properly, our kidneys are constantly filtering waste products out of the blood stream to excrete as urine. Glucose is prevented from being excreted along with waste products by a protein in the kidney called the sodium glucose transporter- 2 (SGLT-2, and to a smaller extent a second protein called SGLT-1). The idea behind an SGLT-2 inhibitor is essentially to turn off the SGLT-2 protein, so that glucose can be excreted in urine. The thought of peeing glucose may seem a little strange, but some researchers think of this as a pretty clever way of lowering blood sugar - time will tell!

SGLT-2 has been recognized as a target for the treatment of type 2 diabetes for a long time, but researchers have struggled for many years to find a safe molecule that effectively blocks SGLT-2. Phlorizin, one of the earliest SGLT-2 inhibitors that was developed, initially looked very promising but was later found to cause unpleasant side effects such as diarrhea and flatulence. Fortunately, several new and promising SGLT-2 inhibitors are in late-stage development. The furthest along of these molecules is called dapagliflozin, in joint development by Bristol-Myers Squibb and Astra Zeneca. It may become available to patients in 2009 if all goes well at the FDA. Several other SGLT-2 inhibitors from GlaxoSmithKline, Roche, and other companies are also in development.

One notable feature of the SGLT-2 inhibitors is that they may cause significant and sustained weight loss. By inhibiting SGLT-2, people may excrete about 100-300 calories worth of glucose - not a trivial amount. For some perspective, this is like peeing out one to three whole bananas every day (a banana is about 100 calories). Given the potential for weight loss, some companies are actively pursuing SGLT-2 inhibition as a treatment for obesity.

Because SGLT-2 inhibition is new and largely untested, safety clearly remains a key concern. At the European Association for the Study of Diabetes (EASD) 2007 Annual Meeting, held in Amsterdam, Dr. Ralph A. DeFronzo of the University of Texas, San Antonio, assured the audience that SGLT-2 inhibition would be safe. He pointed out that there are some people who are born with a problem with their SGLT-2 protein, and these people have normal plasma glucose and no evidence of kidney dysfunction, adding that hypoglycemia is rarely if ever observed.

In short, therapies are advancing more rapidly than ever, and numerous new and exciting treatments are on the way. In fact, the drugs described above are only the tip of the iceberg. We did not touch upon glucokinase activators, gluconeogenesis inhibitors, cortisol synthesis inhibitors, inhibitors of 11b HSD1, or a range of new insulins – the list goes on and on. Explanations of these exciting classes of drugs will appear in future diaTribe Learning Curves.

Despite our optimism, we must note that new drugs do not always live up to their promise. Take the story of troglitazone, the first approved insulin sensitizing drug. Although it was highly effective at controlling blood glucose, it was removed from the market in 1999, only a few years after becoming available to patients, because it was found to cause serious liver damage and was responsible for more than 61 deaths. Drug development is hardly ever a smooth process, and it often proceeds as two steps forward, one step back. Until improved therapies become available to patients, we need to make the best use of the tools that are available now. Better therapies may be ahead, but let's not forget how far therapy has come.