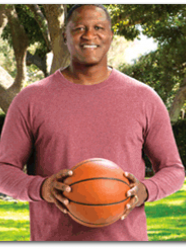 Dominique Wilkins, a nine-time NBA All-Star and Basketball Hall of Famer, has plenty of experience with tough fights. Although he is probably best remembered for his jaw-dropping dunks, the star nicknamed “The Human Highlight Film” cemented his legendary status with his heated duels against Larry Bird and Michael Jordan. According to Mr. Wilkins, these experiences on the court have helped him tackle his most recent challenge: managing type 2 diabetes and helping others do the same.

Diagnosed 15 years ago (shortly after the end of his NBA career), Mr. Wilkins admits that he was initially shocked by the news. He resolved to make changes to his diet ("lots of greens") and activity level (“daily!”) and has been successful in managing his health since. Now, as an advocate for people with diabetes, he has partnered with Novo Nordisk to launch a national initiative called the Diabetes Dream Team that provides type 2 patients with resources to achieve three important pillars of diabetes management: a balanced diet, regular exercise, and proper medication.

As type 2 diabetes can come with social stigma and feelings of shame and blame, we appreciate that Mr. Wilkins is using his celebrity to shine a forgiving light on the condition. Especially as a former athlete, he is in a unique place to not only serve as a role model for effective diabetes management, but also to shatter the stereotype that type 2 diabetes only happens to those who are overweight and/or inactive.

We recently had the chance to interview Mr. Wilkins, and he touched upon his initial reaction to his diagnosis, his family history with diabetes, his diabetes management, and his vision for the Diabetes Dream Team initiative.

Christiana: When you were diagnosed with diabetes 15 years ago, how did you react to your diagnosis? What advice would you give to someone who has been recently diagnosed?

Dominique Wilkins: I was shocked when I heard about it, and I had to make some changes in my life in terms of diet and exercise. The best advice I can give to someone who has been recently diagnosed is not to give up on themselves or to look at the disease as a death sentence. Don’t stop living your life. You just have to find healthy options; it’s a very manageable disease if you’re willing to make lifestyle changes. That’s why I’ve teamed up with Novo Nordisk to launch our own “Dream Team.” The Diabetes Dream Team initiative is about helping people with diabetes build their own team – it’s about people coming together that you trust, people who really care about your well-being. We want to send people to DiabetesDreamTeam.com, where you can find healthy options. You’ll find the coach’s clipboard, which will give you great resources with food tips, medication recommendations, and exercise options. It will also help you build your own dream team, consisting of your family, your doctor, your trainer, your nutritionist, and people in your neighborhood. Working together will help you be healthy.

Mitchell: What is your vision for the Diabetes Dream Team initiative?

Dominique Wilkins: The vision is to educate people with type 2 diabetes in order to give them resources they can use – really simple resources – that are not so complicated that they are confusing. DiabetesDreamTeam.com offers a simple program that you can implement in your life or in your family’s life. It shows how you can build a team and use a team-approach to live healthier.

Christiana: Did you feel any level of doubt or dismissal when you first told people you had type 2 diabetes?

Dominique Wilkins: When people receive a diagnosis, they definitely go through the denial of having diabetes. But, you have to accept it and, in a funny kind of way, embrace it. If you embrace it, you hold yourself accountable and are more likely to manage it the right way. It’s the people who don’t manage it the right way who get in trouble, because they ignore the signs and ignore the ways that you need to manage [diabetes] through diet, exercise, and medication.

Christiana: How did the public react – particularly because the disease is associated with obesity and you are a very fit athlete?

Dominique Wilkins: A lot of people look at diabetes in a negative light, because the stigma is that the disease will be with them the rest of their life and kill them at an early age. But it is not a disease that is a death sentence; it is only a death sentence if you ignore it. If you manage it the right way, it’s not a difficult disease to live with. [Editor’s note: If diabetes is managed well, the risk of future complications could go down significantly. That said, daily management is in and of itself a difficult task and one that can’t be taken lightly]. I live with it every day, and I’ll tell you – I feel better now than I did 15 years ago. And it’s because of the way I manage the disease. It’s a manageable disease, but you have to be willing to take the first step in making changes to your lifestyle, because that first step is the hardest.

Mitchell: What does daily diabetes management look like for you? What is your largest day-to-day challenge?

Dominique Wilkins: As far as food, I make sure to eat a lot of green food, vegetables, chicken, fish, and turkey. I don’t eat as much steak as I used to, because my body doesn’t agree with it as much as it used to. I get an interval workout in on a treadmill, and I go outside and shoot [hoops] with my son – 100-150 shots, because it keeps me physically moving. And I make sure to take my medication as my doctor prescribes.

Christiana: As a health-conscious adult, when you look back on your lifestyle as an NBA player, are there any particular lifestyle choices you made – foods, drinks, or eating habits that surprise you now?

Varun: Along those lines, can you talk about your family history of diabetes? And can you speak at all to how your family has managed diabetes?

Dominique Wilkins: My father and grandfather both died from type 1 diabetes. It has been a part of my family for as long as I can remember. In those days, I don’t know if you could call it “diabetes management” at all. They dealt with it and went about their normal day. My grandfather had one leg – he had his left leg amputated. And my father went through amputations, too. They just did a very poor job of taking care of themselves.

Varun: It was certainly difficult back then, and the awareness and appreciation for diabetes management has really improved. With that in mind, you’re an athlete reaching out to the public in the same way that a few other athletes, like Ray Allen and Jay Cutler, have done. What do you see as the role of athletes in raising awareness about diabetes?

Dominique Wilkins: Well, it’s a major role. But it’s not until you’re affected by it that you realize how serious of a problem it is. It’s something I’ve been around all my life and now that I’m physically involved in it, it’s very important to help out. I want to send as many people as we can to the DiabetesDreamTeam website.