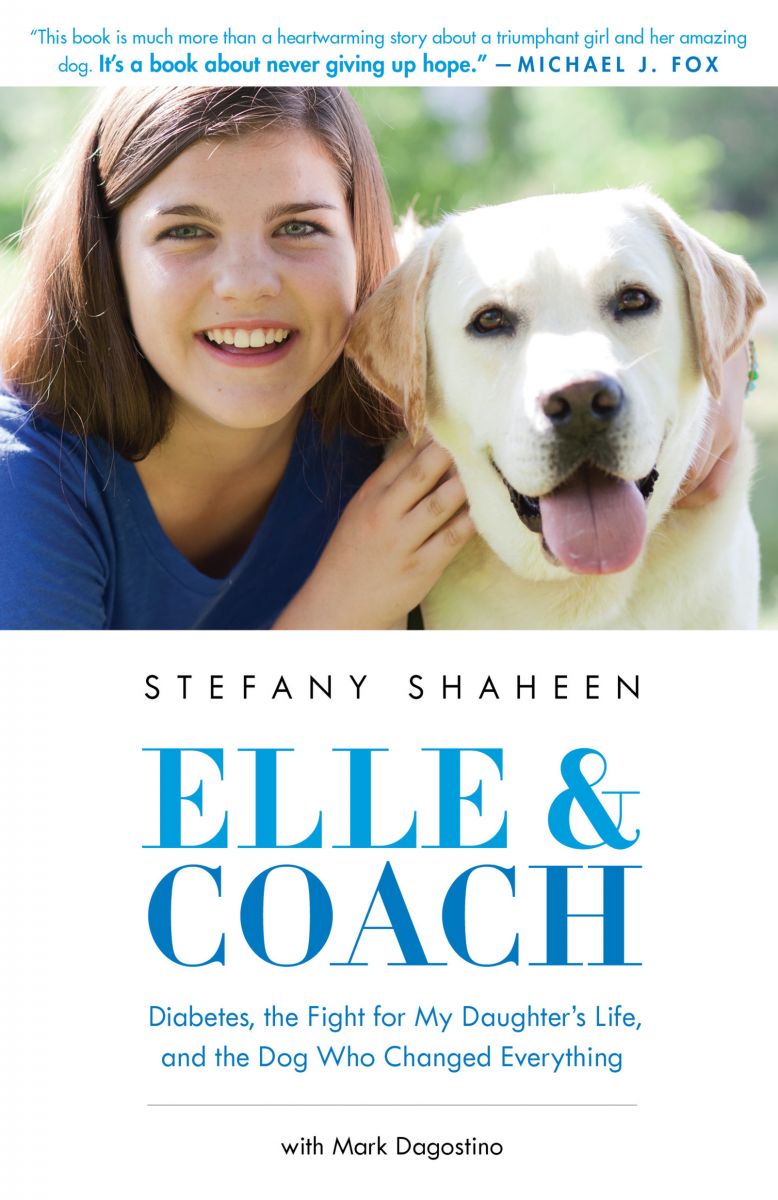 Twitter summary: @StefanyShaheen’s new book shares what life with #diabetes is like and how her daughter’s diabetes dog has made a difference

With her new book Elle & Coach, Stefany Shaheen continues her family’s tradition of advocating for people with diabetes, this time by sharing the story of the Shaheens’ own journey. After The diaTribe Foundation hosted Stefany for a discussion of her book at CPS Lectures, we were eager to review it for diaTribe readers. An easy, engaging page-turner, Elle & Coach will educate and inspire readers of all backgrounds, from those who are directly affected by diabetes to those who have no experience with it. While Coach, the diabetes alert dog that the Shaheens ultimately adopt, is in the title, this book is about much more than him: it’s about the effect that diabetes can have on entire families.

A Life-Changing Diagnosis & A Tradition of Advocacy

Elle & Coach begins with the terrifying details of Elle’s diagnosis with type 1 diabetes at age eight. Stefany’s account of the ensuing highs and lows – including Elle’s hypoglycemia-induced seizure a year into her diagnosis – is a clear reminder that while diabetes care has improved, each day is still a tight-rope walk, and we still must continue advocating for better management options and a cure.

The Shaheens were motivated to try to make a difference in diabetes patient advocacy, so that future families affected by the same disease would not have to go through the fear and difficulty that the Shaheens had endured. From their participation in clinical trials, to their support in overturning stem cell research bans, to their representation in JDRF’s Children’s Congress, the Shaheens have been dedicated to raising awareness of unmet needs in diabetes.

In all these efforts, Elle and Stefany are joining in the legacy of Stefany’s mother, New Hampshire Senator Jeanne Shaheen. Senator Shaheen is one of Washington’s most vocal advocates for people with type 1 diabetes. Even before Elle’s diagnosis, hers was a prominent voice in support of overturning the ban on stem cell research, and once Elle was diagnosed with diabetes, she continued fighting on behalf of people with diabetes as the leader of the Senate Diabetes Caucus.

While participating in JDRF’s Children’s Congress, Elle and Stefany witnessed a diabetes dog in action for the first time. This experience paved the way for them to adopt Coach, a medic-alert dog trained to recognize low and high blood sugars.

Coach, the adorable yellow lab with whom readers will immediately fall in love, was trained by an organization called CARES. While the process for adopting a medic-alert dog differs by organization, all dogs undergo extensive training that capitalizes on their ability to detect the smallest differences in blood sugars. It might be hard to believe that a dog could be this accurate, but the average dog’s sensitivity to smell is 10,000 to 100,000 times more powerful than a human’s! Coach is trained to alert Elle or her family by getting their attention when her blood sugar dips below 80 mg/dl or goes above 200 mg/dl, and the accuracy with which he does so is astounding. To get Elle’s attention, he’ll normally stand up and circle around her, lick her hand, or paw her lap until she checks her blood sugar.

Coach changed the Shaheens’ life dramatically. He helped turn Elle’s diabetes into something that benefitted her family as they all found companionship in Coach, he helped raise awareness of diabetes in Elle’s community by accompanying her everywhere, and he helped Elle keep her blood sugars more in range. An admitted skeptic of diabetes alert dogs, Stefany told us how her doubt disappeared the first night Elle self-treated a low after Coach had alerted her – it was just a few days after Coach joined their family, and it was the first time Elle had ever self-treated a nighttime low in her five years of living with diabetes. Elle had always worked to get her A1c below 8.0%, sometimes 9.0%, and after six months of living with Coach, she had her lowest A1c ever – 7.2%.

Elle and her family will never stop advocating for more research, improved technology, and ultimately a cure, but for now Coach has helped restore emotional health to Stefany’s family. While Stefany acknowledges that a medic-alert dog isn’t the right choice for every family, her book sheds light on how alert dogs can change a family’s relationship with diabetes. We highly recommend this heartwarming, inspiring read, and thank Stefany for bringing such an important story to the public. Those interested in learning more can visit Stefany’s website here, or purchase the book at this link.