Enlite Sensor Shines the Way to a Bright Future 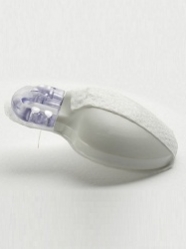 For the past five years I have used continuous sensing technology for my type 1 diabetes. There are many CGM products, but I've stuck with Medtronic's product for a simple reason. I live in Greece, and Medtronic's is the only one available.

Overall I've been pleased – in fact, I've become so addicted to my CGM that I cannot imagine life without it. I've been using the Veo pump with the Sof-Sensor and Minilink transmitter, which were improvements from previous generations. The transmitter was more comfortable, and the system used more advanced sensing algorithms that alerted me when my blood sugar fell too low. A Low Suspend function shut down the pump during those low blood sugars as well.

But the system is not perfect. Every Sof-Sensor appeared to behave a bit differently.  Some needed a day to get "wet" and work, while others lost their accuracy with the slightest movement.  The most difficult and scary part (except for the buying price) was inserting the sensor into my body, especially when I had to press the insertion button for the needle – and the needle, when I removed it, looked huge.
After five years of using the Sof-Sensor, I was hoping that a more comfortable model would be developed, and my wishes finally came true.

In February Medtronic presented the Enlite sensor at the annual International Conference on Advanced Technologies and Treatments for Diabetes (ATTD). According to the clinical data presented, the new sensor is smaller and more accurate, with better adhesives and a redesigned insertion procedure that hides the needle from the user. "Instant wetting" was to be another plus.
I was dying to have it.

In April, Enlite got CE regulatory approval, and some days later I got it, with the inserter.

The first obvious difference was that the Enlite sensor was not packed in a bag, like the Soft-Sensor, but in a hard plastic box, very similar to a Quickset box.  It also does not need refrigeration, so I could store my sensors in the same place with my other diabetes supplies.

The Enlite's inserter looks twice as long as the Quickserter but has only one button at the upper side. The sensor's packaging is much more sophisticated than the Sof-Sensor's, and the needle is well hidden.
It was time to mount it on me and see if all promises were true.

I unpacked the new sensor and placed it on a clean table. I held it with my two fingers while I placed the inserter on top of it.  The inserter is designed to prevent any error while placing the sensor in it, and I heard a click to indicate that the two pieces had been attached successfully.

The next step was to remove the first part of the adhesive and place the inserter on my stomach. When I pressed the insertion button, nothing happened. I soon realized why. The actual insertion happens when you release the button.  So I released it and felt only a soft punch on my body.  I had no feeling of a needle piercing me. I thought I had done something wrong, but I decided to continue the procedure as written in the guide.

I kept the inserter in place and counted to five (for the adhesive to stick) before I pressed the button and pulled the inserter away. Then I removed a plastic part at the top of the sensor, with the needle hidden inside that part.  I never saw or felt the needle – great news indeed.

Two pieces of a special transparent adhesive tape come with every sensor. They look like an IV3000 in size, but they have an orthogonal hole in the middle.  When placed correctly, the adhesive holds the sensor to your body, with the hole letting free the connections to connect the transmitter.  The glue that Medtronic uses on the transparent adhesive tape is much stronger than the glue used with the Sof-Sensor's adhesives, and so far I have had no allergic reaction.

Finally, I connected the transmitter, the same way I always did, and started up the system from my pump. Because I planned to use my first Enlite sensor as long as possible, I placed an IV3000 on top of sensor and transmitter, even though the guide did not call for that.

enlite sensor in use

The first improvement I saw in using the new sensor was its raw signal, called its ISIG's power. This signal is processed by the pump's algorithm to produce the readings on the pump's screen.  Enlite's signal was far higher than what I ever saw from Sof-Sensor. The first day in particular was strong. The signal fell after that but has stayed steady ever since (17 days as of this writing) (Editor's note: the product is indicated for six-day use).

Because of that first day's decrease in the signal, I had to restart the sensor on day two and not provide the requested calibration for two hours to let the system forget previous calibrations. After that restarting, the system was incredibly accurate for the next six days.  It nearly mirrored my Abbott Freestyle Lite BG meter, following my highs and lows with a lag time of about six minutes between the sensor glucose and the blood glucose.

On days 7 and 14, when I had to recharge the transmitter and restart the sensor, I had fewer problems, as the system's raw signal did not decrease, as it had on day one.

I'm amazed with my Enlite's accuracy, stability, and durability, notwithstanding the first day when the results were not that accurate.  I hope it's not beginner's luck!  Enlite clearly has higher definition than the Sof-Sensor – that is, its signal power is stronger and therefore detects glucose variability with more details – and Enlite follows all my trends at highs and lows very close to my Freestyle Lite meter.  My highest meter reading was 263 when my sensor reading was 257.  My lowest meter reading was 38, though my sensor reading was blank because values below 40 do not appear.

On my Veo pump, I use high and low alerts (69-121), prediction alerts (30 minutes), and rate alerts (fall 2.0/min, rise 1.5/min).  I checked every single high or low pump alarm alert with my BG meter and, with the exception of the first day, found that all alerts were accurate.  Some of these alerts gave me the chance to identify the six-minute lag between the meter's blood glucose and the sensor glucose.  The lag reflects the difference between the BG reading from blood and the SG measurement in interstitial fluids.

More good news: The adhesives are still well stuck after 17 days, though I've replaced the top IV3000 six times after showers without harming the original adhesives.  I plan to use this first sensor as long as I can, at least 21 days, just to see how it responds until it dies.  Please keep in mind that the Enlite sensors are only approved for six days, and I'm not recommending that others try it for as long I have.

I have only used one Enlite sensor, so it's difficult to make any definitive conclusions, but I can make these observations on its pros and cons.