European Association for the Study of Diabetes (Amsterdam, September 17th-21st, 2007) 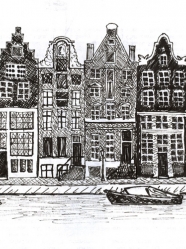 In September, the diaTribe team traveled to Amsterdam to attend the 43rd Annual Meeting of the European Association for the Study of Diabetes (EASD). This year, it attracted over 14,500 participants. Compared to its American counterpart, the annual meeting of the American Diabetes Association (ADA), EASD was most focused on basic science and insulin therapy. See below for our EASD Pearls.

The name of the game at EASD Intensification. Whether discussing glycemic control, macrovascular events (heart attacks, strokes) prevention, or insulin initiation, presenters and chairs kept citing the need for faster, tighter, and more comprehensive diabetes management. Whew, this puts the pressure on us as patients! Some of the field's leading researchers called on all doctors and nurses to be more aggressive in fighting diabetes - change a diabetes management regimen before it fails, they say, and before inadequate management raises our risk of poor health outcomes. This means setting ambitious A1c goals, trying for better post-meal glucose control, and using combination therapy.

All things continuous! Continuous glucose information and continuous subcutaneous insulin infusion (CSII or insulin pumping) both yield better control and higher patient satisfaction. We would agree with this! Several presentations throughout the week suggested that continuous monitoring translates into better glucose management. Pumps also make for better glucose results, particularly in groups such as children, overweight individuals with type 2, and pregnant women with type 1. CSII is associated with less fear of hypoglycemia, less concern about diet restrictions, and higher treatment satisfaction despite the fact that researchers said pumps can be hard to figure out how to use (they call this the "complexity factor" - we are lobbying for more "user-settable" settings we can just all set personally so we can use and ignore features as we wish!). 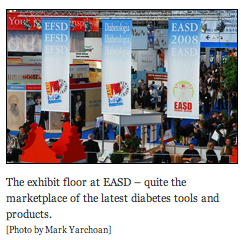 Appropriately enough, given the theme of intensification, several talks at EASD predicted a trend toward more insulin therapy for type 2 patients. Insulin, no longer just the heavy-duty machinery for reigning in abnormal blood glucose, should be considered a "positive therapy" for positive results. Taking insulin earlier is associated with tighter glycemic control in the short-term and reduced rates of cardiovascular events and hypoglycemia in the long-term, in addition to improved micro- and macrovascular health. The need for providers to "get positive" (and become more persuasive with us, the patients!) on insulin therapy is clear. In-session surveys showed that attendees believe needle fear is the #1 reason patients do not want to start insulin. Hmm, do we agree with that as patients?! Furthermore, data on type 2 patient opinions show that few believe insulin will help them manage their diabetes better, and almost a third of physicians postpone insulin as long as possible. That's a problem! If your A1c is over 7 and you can't get it down, we suggest you talk to your doctor and ask if he or she would consider any changes if they were you! Some people believe the 7 percent A1c goal will go down and that we should be at more "normal" A1c levels, like Dr. Nancy Bohannon in San Francisco - so you might ask your doctor about that too. 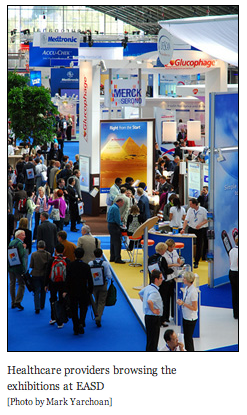 More intensive management will require greater patient participation. To meet post-prandial glucose (PPG or after-meal glucose) targets, the International Diabetes Federation (IDF) recommends that people taking insulin should test three times a day, including one test at least two hours after a meal. These guidelines might affect people with prediabetes, too, since they are based on PPG. Shifting toward taking earlier insulin also places greater responsibility on patients, since insulin therapy requires patients to get some significant education on dosing, carb counting, and administration.

The Relationship between Insulin Sensitivity and Cardiovascular risk (RISC) trial results show widespread benefits of physical activity. More evidence that we have to get out and move! While exercise and lifestyle intervention were not central themes of the conference, impressive data from this trial suggest many benefits from all forms of physical activity. Total activity, not just intense exercise, improves insulin sensitivity, and increased activity is associated with improved insulin sensitivity independently of waist circumference. The bottom line is that moving during the day is extremely beneficial, irrespective of intensity.

Once again, when it comes to reducing cardiovascular risk, the best tactics involve intense treatment. Cardiovascular (CV) risk is best reduced through tight blood glucose control and intensive therapy, including early insulin initiation. The importance of glycemia in cardiovascular health is indisputable; 69 percent and 39 percent of patients admitted for acute myocardial infarction (MI or heart attack) or stroke test positive for impaired glucose tolerance (IGT) and undiagnosed type 2 diabetes, respectively. Furthermore, the most common risk factor for CV events in individuals less than 45 years is undiagnosed metabolic disorders and obesity. The American College of Cardiology is working on new guidelines that demand glucose testing before patients admitted to a hospital for acute cardiovascular conditions can be released.

Finally released, a new system for reporting blood glucose. Results from one trial looking at average blood glucose control and A1c have identified a new equation to make numerical assessments of glycemic control more accessible to patients. Researchers hope patients will find it easier to integrate this information into their management behaviors and improve control because the average glucose scale matches that of glucose meters. In a conversation with Dr. Zach Bloomgarden, reputed as one of the best, well-known diabetologists in New York, diaTribe learned that this new equation may not be universally applicable for all patients. Here's a rough idea of how A1c translates to meter readings:

Greater attention must be given to depression in diabetes. The association between diabetes, depression, and adherence exposes the need for new mental health screening guidelines to support providers in identifying patients whose physical health cannot improve without attention to mental health.