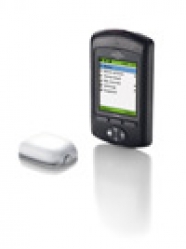 For several years, we’ve been closely following Insulet’s progress with the FDA to get its smaller second-generation OmniPod approved (see new now next in diaTribe #33). Based on the company’s most recent communication with FDA, we believe approval of the new pump could come in the last few months of 2012. This is approximately a one-year delay from Insulet’s initial expectations (we had seen the product when it was in early development so we have been excited about it for quite awhile!). Part of the reason for the delay is that the current FDA requirements for insulin pumps are quite complex: Insulet had to submit a 7,800-page document – in triplicate! As we understand it, Insulet is currently addressing a single remaining regulatory concern about the pump’s software by adding several confirmation screens (e.g., after setting the clock on the PDM handheld, a user will have to Yes/No confirm that the time was entered correctly). Once the device is approved, current OmniPod users will be upgraded to the new pods and new handheld devices when they reorder supplies. On a very bright note, the upgrade should not add any costs for the patients or their insurance companies. In Europe, the new OmniPod has already launched in the Netherlands, Germany, Austria, and the UK (see new now next in diaTribe #36 for our coverage of the approval) and we anticipate more than 500 patients have the second-gen OmniPod there already.

As a reminder, the new pod is 34% smaller, 25% lighter, and 16% slimmer than the current pod, though it still has the same 200-unit insulin capacity – an impressive manufacturing and engineering achievement. The new pods also have fewer parts than the current OmniPod, which is expected to both reduce costs and improve pod quality – a win-win for both patients and the company. The second-generation OmniPod will also feature a new PDM handheld that includes an expanded communication range (yes!) and use of both correction and meal boluses to calculate insulin on board (the current handheld only takes into account correction boluses for insulin on board – this will be terrific to have this available, as patients have requested it for some time). The PDM will continue to integrate the Abbott FreeStyle meter, though a second handheld is expected to become available sometime in 2013 that will feature an integrated LifeScan meter compatible with Verio strips, giving Insulet pump users the choice of two brands of strips, unlike any other pump offered today. Notably, Dexcom and Insulet will soon begin working on development of a handheld that integrates Dexcom’s new Gen 4 CGM sensor into Insulet’s OmniPod handheld (i.e., the CGM readings will appear on the OmniPod handheld screen, eliminating the need to carry the separate CGM receiver). No timeline has been announced on this device, though we expect it could be available in late 2013 or early 2014. –AB/KC