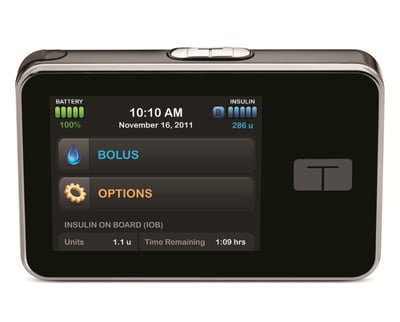 In Tandem’s recent quarterly update call, the company shared its expectation for an FDA approval of the t:slim G4 pump sometime later this year, with a launch to follow within 60 days of the approval – that means the device could launch in late 2015 or early 2016.

The t:slim G4 is the same touchscreen t:slim insulin pump that we first test drove in 2012, but with the added ability to wirelessly receive CGM data directly from the Dexcom G4 Platinum transmitter. That means patients can view their Dexcom CGM data directly on the pump screen, similar to the Animas Vibe/Dexcom integration that launched in January.

In disappointing news, Tandem will not offer an upgrade program for those currently using a t:slim pump to get on the t:slim G4. (The business realities of insulin pumps make this challenging for a small company like Tandem.) Current Tandem users interested in moving to the t:slim G4 will need to wait until their pump warranty is up.

In case you’re wondering, the t:slim G4 won’t be directly compatible with Dexcom Share, which still requires using the new G4 Platinum Share receiver and paired iPhone app. As we discussed in the Animas Vibe test drive, patients could simultaneously use BOTH the t:slim G4 and Dexcom receiver, but that would require calibrating both devices separately (i.e., entering calibration blood glucose values on the pump, and then separately on the Dexcom receiver). The t:slim G4 also doesn’t incorporate Dexcom’s new Software 505, which improves the accuracy of the G4 Platinum.

Ultimately, we believe the t:slim G4 is a good option for those planning to switch to a new pump soon and tired of carrying around the Dexcom receiver. But if you are a Dexcom user and have a couple years to go on your current pump warranty, do not lament! Tandem also announced that future generations of t:slim pumps will integrate with the Dexcom Gen 5 and Gen 6 CGM systems, with the ultimate goal of creating an automated insulin delivery system. How great is that! The timeline is unknown at this point, but will follow Dexcom’s own launches: