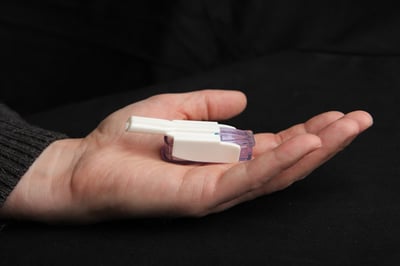 On June 27, the FDA approved MannKind’s Afrezza for type 1 and type 2 diabetes, a new rapid-acting inhaled insulin. We’ve been following this story for years in diaTribe, and the approval marks a major win for another mealtime insulin option. There is no firm launch timeline yet, though in the past, the company expected to launch Afrezza within six months of FDA approval. MannKind has also previously stated that Afrezza would be priced roughly comparably to current rapid-acting insulins (Humalog, Novolog, and Apidra); if this is the case, we are optimistic about reimbursement for type 2 patients in particular. We think most type 1s would prefer to use it as a “supplement” to their current mealtime insulin rather than a substitute so we imagine reimbursement will be more challenging initially for type 1s.

Afrezza will come packaged as a powder that is administered with a small inhaler – based on videos and pictures we’ve seen, the device fits in the palm of the hand and is fairly unobtrusive and easy to use – you can see a video on MannKind’s website here. Based on studies, we understand that Afrezza is a very fast insulin that peaks in the blood stream within 12 to 15 minutes, much faster than currently available rapid-acting insulins that take around 50 minutes to peak.

The inhaled insulin has been approved in two dosing options – a cartridge equivalent to four units of injected rapid-acting insulin, and another equivalent to eight units. This means that patients will only be able to take Afrezza in multiples of four units, which could make it challenging to use in type 1 diabetes and for those who are very insulin sensitive. As we noted in our coverage of the phase 3 trials of Afrezza, patients with type 1 diabetes saw significant benefits to taking Afrezza such as less hypoglycemia (moderate and severe) and less weight gain compared to Novolog (insulin aspart). In type 2 diabetes, there is much less concern over the dosing, and the convenience of an inhaled, needle free insulin should be attractive to many patients.

Four additional clinical trials, post-approval, are required for Afrezza, including a long-term study to determine its cardiovascular and lung safety. People with type 1 diabetes must use Afrezza with long-acting insulin, and the FDA does not recommend Afrezza for people who smoke or who have prior lung conditions.

We believe patients and healthcare providers played a role in this approval - we applaud it as it means more treatment options for patients, which should help improve adherence to insulin and which may well bring more people with diabetes on to insulin - with nearly 45% of patients not at their glycemic targets in the US alone and only 29% on insulin (of any kind!) we believe more patients considering insulin would be a benefit. We salute with special gusto the legendary entrepreneur the CEO of MannKind, 89-year-old Mr. Al Mann, who advocated for years for Afrezza’s approval (its first two attempts at FDA approval both resulted in long delays). We look forward to hearing real-world patient use of the product – we’ll certainly be testing it out in diaTribe. For more background on Afrezza, please read our past letter from the editor, our new now next on the drug’s FDA advisory committee, and our coverage of the phase 3 trial results in type 1 and type 2 diabetes. -AJW/AB/KC