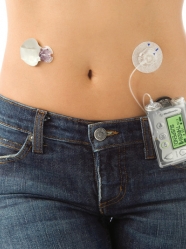 On September 27, Medtronic announced FDA approval of the MiniMed 530G system (the US version of the Medtronic Veo insulin pump and the more accurate Enlite CGM). A launch is expected in the next several weeks. This will be the first available system in the US with “threshold suspend” (known in Europe as "low glucose suspend"), a pump feature that automatically suspends insulin delivery for two hours when CGM sensor glucose values reach a preset low level (60-90 mg/dl) and the user does not respond to alarms (i.e., mostly during sleep). We will be trying out the pump in a future diaTribe test drive – stay tuned!

Medtronic will have upgrade options for both recently new and existing pump patients. Customers who recently enrolled in Medtronic’s New Technology Guarantee Program are eligible for a free upgrade to the MiniMed 530G/Enlite CGM – this applies if you bought a Revel system with CGM in the past several months. In a few months, Medtronic will also have a Path2System program, which will allow in-warranty pump customers to upgrade for about $399. Most insurance companies will only pay for a pump every four years or when a customer is out of warranty - if someone wants to upgrade within the four-year in-warranty period, the Path2System program will provide assistance to make this an easy option. For all other patients, the process of getting on the MiniMed 530G would be the same as getting a brand new pump. The best way to figure out your situation is to contact Medtronic directly.

One important note for those looking to upgrade – the MiniMed 530G with Enlite CGM is only approved by the FDA for patients 16 years or older, although Medtronic has plans to begin a study on the system on children younger than 16 years old. It’s not clear when that might finish. Those younger than 16 might still be able to get the pump, but their healthcare provider would need to write an “off label prescription.” Providers are allowed to do this at their discretion, and though Medtronic will not officially encourage this, it would be best to ask your healthcare team for their opinion.

The approval of this pump is a positive sign that the FDA is moving forward on the artificial pancreas. That said, it’s been a very long road, as the Medtronic Veo (the international version of the MiniMed 530G) has been available in 50 countries outside the US since 2009! Medtronic reported lots of encouraging data at ADA 2013 on the MiniMed 530G/Veo, demonstrating the pump’s ability to reduce hypoglycemia by over 30% overnight, and in a separate study, to completely eliminate severe hypoglycemia. More details can be found in our ADA conference pearls.

There has been some controversy over whether this should, in fact, be called an “artificial pancreas system” as the FDA has termed it. Although there is a long way to go until achieving a fully automated system (particularly for all insulin delivery), the fact that the pump can automatically shut off insulin delivery qualifies it as the first step to an artificial pancreas system. Furthermore, the fact that the FDA is using terminology for an “artificial pancreas” likely bodes well for further work on a closed loop system. –AB/KC