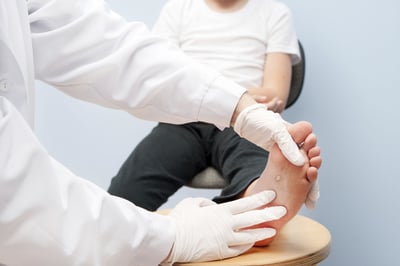 Making major improvements over current standard of care – how does this new treatment work?

The approval is based on results from the “FOUNDER study” of 307 people with foot ulcers, demonstrating significantly improved ulcer healing with the Omnigraft matrix compared to the current standard of care (which includes cleaning the wound, covering it with a surgical bandage, and keeping weight off that foot). How did the Omnigraft compare?

What is the Omnigraft and how does it work to treat diabetic foot ulcers?

The Omnigraft is used to help skin and blood vessels grow back healthily in areas where a wound – such as an ulcer – has occurred. It is made out of silicone, cow collagen, and shark cartilage. In a doctor’s office, a healthcare team first removes any dead or damaged tissue and cleans the affected area. Then, the Omnigraft is put over the ulcer in place of the removed tissue. Over time, skin cells grow back and new blood vessels are formed, eventually leading to permanent wound closure. In people with diabetic foot ulcers, the Omnigraft is approved for ulcers lasting over six weeks.

As standard diabetic ulcer care has failed to successfully treat so many people with this complication, new options such as this Omnigraft matrix have the potential to significantly improve patient outcomes. –AJW/ER