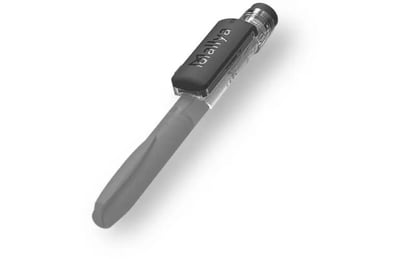 The FDA cleared Mallya, a new smart medical device for disposable injector pens. This allows users of both insulin and GLP-1 receptor agonist pens to connect the device to a smartphone, to track dosing, date and time of injection, and more.

In December 2022, the FDA cleared Mallya, a smart sensor that attaches directly to insulin pen injectors, turning a disposable pen into a smartphone-connected device.

Mallya, which was previously cleared in Europe in 2019, helps insulin pen users track important treatment information, including dose taken, date, and time of injection. The device stores this information in the Mallya app, connected via Bluetooth, available on Apple and Android phones.

Unlike other connected insulin pen caps, however, Mallya can also be used to track dosing of GLP-1 receptor agonists. According to Biocorp, the manufacturer, Mallya is the first device in the United States with the ability to automatically connect insulin and GLP-1 injector pens to a smartphone app.

The device is compatible with most popular insulin pens, including Lilly’s Kwikpen, Sanofi’s Solostar, and the Novo Nordisk FlexPen. Biocorp also announced that it has partnered with Novo Nordisk, Sanofi, and Roche Diabetes Care to improve Mallya’s current design moving forward.

Mallya might offer users more convenience than other smart pen devices, as it can attach to many different disposable injection pens, and track dosing for basal and bolus insulin, and GLP-1 receptor agonists.  It is also easy to install and remove, making it easy to transfer to new pens.​

According to the Mallya website, the device’s lifespan is two years before a replacement is needed, and in no way does it change the way that users operate their insulin pen. The device can be charged via USB and, with average use of three to four injections per day, requires charging once a month. Also, for those who have different pens for multiple types of insulin, the app can connect multiple Mallya devices, one for basal insulin and another for bolus, for instance.

Though Mallya has received FDA clearance to be marketed in the United States, the product is not yet available. Biocorp has not announced an official US launch date for the device. For more information, visit the Mallya website.