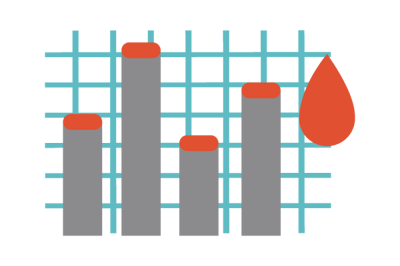 T1D Exchange Registry data reveals only 17% of youth and 21% of adults are meeting A1C goals, even though more are on pumps and CGM

Recently, the T1D Exchange Clinic Network released the “State of Type 1 Diabetes Management and Outcomes from the T1D Exchange in 2016-2018,” which is the result of a survey of more than 20,000 people exploring outcomes in A1C, hypoglycemia, continuous glucose monitor (CGM) usage, and more. Alarmingly, the authors note, “there is no indication that A1C levels in the registry as a whole have improved despite an increase in the use of insulin pumps and CGM.” While much of the report can be seen as disheartening, there are some great takeaways – CGM and insulin pump users tend to have lower A1Cs and less hypoglycemia, suggesting the need for improved access to these devices in the type 1 community.

The majority of both youth and adults surveyed aren’t meeting A1C goals defined by the American Diabetes Association, and average A1C in the network has actually risen.

The A1C stats for adults hasn’t actually changed much from 2010-2012, but outcomes in young people have actually worsened. Higher A1Cs are linked to diabetes complications.

Keep in mind that people enrolled in the T1D Exchange are receiving care from endocrinology clinics, which likely means above-average care; these results are not generalizable to the entire US type 1 population. Unfortunately, general population outcomes are likely to be worse than those presented in this paper.

CGM and Pump Use

On the positive side, CGM use is expanding rapidly – now up 30%, quadrupling from 7% in 2010-2012. Much of this growth is due to increased use in children. It’s important to note that CGM users have lower A1C levels (by about 1%) than their non-CGM user counterparts.  If you are interested in getting on CGM, see here on what’s available.

Although pump use has increased from 57% to 63%, with the largest increase also in children, there isn’t a substantial difference between A1C outcomes in CGM use for those who take insulin injections compared to those who use pumps.

One in 10 adults over 50 years old reported having an extreme blood sugar low – defined as a seizure or loss of consciousness due to hypoglycemia – in the past three months. This is a very serious finding, since the number is so high. The good news is that people in the network who used pumps and CGM had fewer extreme lows, which is a great reason for seeing if they are right for you.

The data also found that diabetic ketoacidosis DKA (follow the link for an explanation of DKA, a life-threatening complication caused by not getting enough insulin) is slightly more frequent in people younger than 26 years – 4% of this group reported at least one DKA event in the three months before taking the questionnaire, compared to 3% of the overall study group. Pump and CGM use was also associated with less DKA.

There is huge room for improvement for the health and wellbeing of type 1s in the US as a whole. Of course, not everyone will be able (or want) to get a CGM or an insulin pump, but this data shows that it’s a great option for those who are/do.

The information presented in this paper can also be a useful starting point for a conversation with your healthcare provider about how you’re doing with your own diabetes management goals and additional tools that may help. We encourage you to share this article and the paper with your educator, physician, and anyone else on your care team.