If you have a Fitbit, check out the diabetes communities in the app for tips and support from fellow people with diabetes

Many people with diabetes and prediabetes find Fitbit, a popular activity tracker worn on the wrist or clipped onto clothes, useful for keeping track of steps, physical activity, and other measures like heart rate and sleep. The Fitbit smartphone app, where users can see their own activity dashboard, also has a less-known newer feature: the Fitbit community. Similar to Facebook, Fitbit now has public groups in which people with shared interests offer support, encouragement, and solidarity. 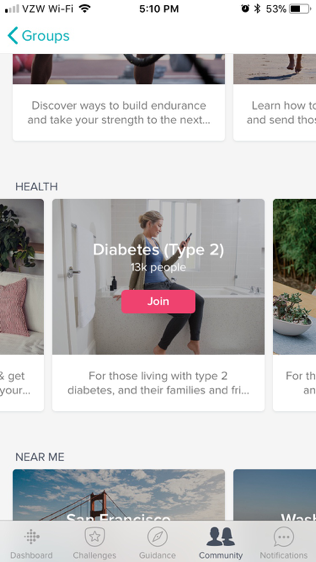 At least one study has shown that people with diabetes who engage with online communities are more likely to have lower A1C levels and a higher quality of life. While this study didn’t specifically focus on Fitbit communities, the advantage of peer support is of course still relevant. As diaTribe editor Senior Editor Adam Brown says in the conclusion to Bright Spots & Landmines, “Don’t do diabetes alone.” Healthcare providers are also increasingly recognizing the value of peer support communities.

In the Fitbit app, users can find groups under the community tab. The type 2 diabetes group (over 13,000 members) and the type 1 group (over 6,000 members) can be found in the “health” section. For people whose goal it is to lose weight, there are also very large weight management groups in the Fitbit community as well.

Fitbit’s approach to community is interesting, as the data from its devices can provide a shared basis for conversation. The most common status update people share is the number of steps they’ve taken, and the achievements tied to meeting step goals. Walking – a focus on Fitbit – is a great way to lower blood sugars, especially after meals. Fitbit does integrate data with some diabetes apps (e.g., Glooko, One Drop), though many people with diabetes in the groups manually take pictures or share screenshots of their diabetes technology (see below). We expect this to change as more diabetes device companies seek to add activity data, and as Fitbit moves further into helping people with diabetes through its partnerships with Dexcom, Medtronic, One Drop, and Sano. In the meantime, group members are also sharing everything from health updates, food tips, and uplifting dog photos.

Each Fitbit model has a different set of tracking features, with pricing to match; the simplest wrist tracker, Fitbit Flex 2, is $59.95, while the latest Fitbit Versa smartwatch offers more features and is $199.95. Fitbit and Dexcom are working to launch an app that enables Dexcom CGM data to be viewed right on the Fitbit device, set to launch in the second half of this year. One Drop’s Fitbit app is already available.