Taxes on sugar-sweetened beverages (SSBs), sometimes called soda taxes, are rising in popularity – but not without controversy. These taxes aim to improve health by reducing sugar intake while generating revenue for government initiatives. However, opponents of the beverage taxes argue that they don’t work or are an example of governmental overreach. To hinder the rising popularity of SSB taxes, these opponents have enacted a new strategy called “preemption.”

Preemption prevents state and local governments from passing certain laws. In this case, states have passed preemption laws that prohibit cities from enacting taxes on sugar-sweetened beverages. Preemption has previously been used by the tobacco and firearm industries – 45 states have laws affecting the ability of cities to enact gun control laws, and twelve states preempt smoke-free laws. Beyond SSB taxes, states are using preemption to control legislation over things like e-cigarettes, paid sick days, and fire sprinklers. At a higher level, the federal government is also able to preempt states from passing certain laws.

This June, California banned any new food or beverage taxes until 2031, and Arizona and Michigan have recently preempted beverage taxes. The California preemption appears to be the result of the beverage industry’s financial backing of a ballot initiative threatening to negate any local tax passed in 2018 with less than a two-thirds supermajority. Passage of this initiative would have resulted in many localities losing essential revenue, so the legislature passed the food and beverage tax preemption as an alternative. As of our latest check, Oregon and Washington have also introduced preemption ballot measures.

Sugar-sweetened beverages contribute the largest amount of sugar to the American diet, accounting for 6.5% of adults’ total daily calories. Consumption is linked to obesity, type 2 diabetes, heart disease, and tooth decay. Given the lack of nutritional value in sugary beverages, public health experts have zeroed in on reducing their intake as a way of combatting the rise of obesity and type 2 diabetes.

Taxes that raise the shelf price of sugar-sweetened beverages are one way to discourage consumption. In its first year, Berkeley’s penny-per-ounce tax reduced consumption by 10% and generated $1.4 million in revenue. In Mexico, a peso-per-liter tax led to a 7.6% decline in purchases.

In total, there are eight national SSB taxes in effect: 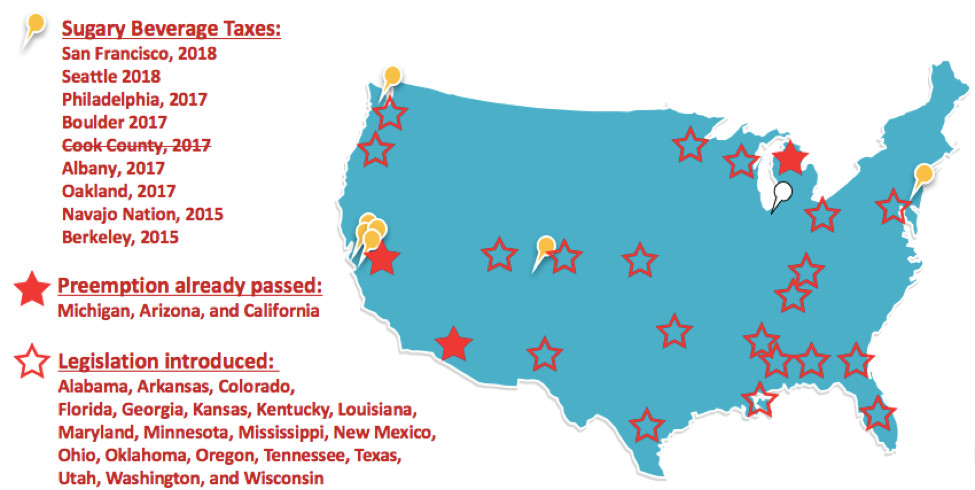 Though preemption laws are limiting the spread of this important public health effort, many voters will have the chance to influence the future of soda taxes at the polls this November. Learning the platforms of potential state legislators will be critical in determining if these laws might be implemented.

Even where city-wide soda taxes are prohibited, local institutions can still work to reduce the prevalence of sugary beverages. SugarScience’s guide offers a resource kit for promoting healthy beverage consumption at your organization.