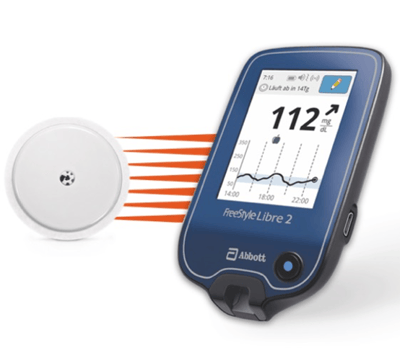 The addition of Bluetooth connectivity enables high and low blood glucose alerts; it is same size and price as the original FreeStyle Libre, and shows far better accuracy

Abbott, a leader in continuous glucose monitoring (CGM), announced that the FDA cleared its next-generation FreeStyle Libre 2! The new integrated continuous glucose monitoring (iCGM) system will be available to adults and children ages four and older with diabetes. The clearance for use in children is particularly exciting, as the original FreeStyle Libre is only approved for people ages 18 and older.

It is not yet known when the FreeStyle Libre 2 will officially launch in the United States, though Abbott says it will be in the “coming weeks.” We will keep you updated!

FreeStyle Libre 2 keeps the same “scanning” feature as the original FreeStyle Libre, and adds Bluetooth connectivity. This is important because it allows optional alerts for high and low blood glucose levels. Users that turn on these alerts will be able to get a notification on their reader or phone whenever their glucose reading goes above or below their specified ranges. The reader can make a sound and vibrate to tell the user that they are high or low, but will only show the actual blood glucose number and trend when the user scans the sensor.

Looking ahead, the Bluetooth feature will also ultimately allow FreeStyle Libre 2 to be part of automated insulin delivery systems (AID), like Insulet’s Omnipod Horizon – this feature makes it an integrated continuous glucose monitor (iCGM). In order to meet the criteria for iCGM, FreeStyle Libre 2 has improved accuracy over the original FreeStyle Libre, particularly for low blood sugar ranges. Currently, Dexcom G6 and now FreeStyle Libre 2 are the only FDA-cleared devices that meet iCGM criteria. AID approval is the next step, so that FreeStyle Libre 2 can be used with closed loop systems (like Loop or Control-IQ).

The FreeStyle Libre 2 has already launched in a few European countries (including Germany, France, Italy, Spain, and Finland) and will launch in others soon, with the UK likely to come this summer. In the US, FreeStyle Libre 2 was under FDA review for more than a year. Its clearance is a huge win for people with diabetes in the US!