GLP-1 agonists (for example, Byetta, Victoza, and Bydureon) were first approved in 2005 and stimulate the body to produce insulin only when blood glucose levels become too high. Lately, the concept of using a GLP-1 agonist with a basal insulin (such as Levemir and Lantus) has received more attention; the use of this combination to treat type 2 diabetes offers a number of advantages. One advantage is that GLP-1 agonists and basal insulins act in complementary ways to lower blood glucose, meaning that the use of both therapies together may well improve blood glucose control more effectively than either therapy alone. A major advantage of combination GLP-1/basal insulin therapy is that treatment with a GLP-1 agonist can lead to reduced food intake and weight loss, which may help overcome the weight gain typically observed with basal insulin therapy. Moreover, basal insulins act slowly and over a long period of time to cover background insulin needs, while GLP-1 agonists stimulate insulin secretion only when blood glucose levels are high. This makes GLP-1 agonists effective therapies f0r post-meal glucose spikes without increasing the risk for hypoglycemia. 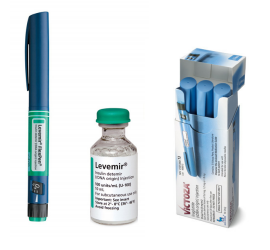 April marked an exciting month for combination GLP-1/basal insulin therapy, with three notable announcements made. The first announcement was that the GLP-1 agonist Victoza was finally approved for use with any basal insulin in the US. The approval was based upon a study that looked at the safety and effectiveness of treating people with Levemir, a basal insulin, who were already using Victoza and metformin. Over 52 weeks, those treated with Levemir achieved an additional A1c reduction of 0.5% over those who were not. The risk for hypoglycemia was higher among those receiving Levemir, although the risk was still low (0.228 episodes per patient year vs. 0.0034 episodes per patient year). Finally, it was shown that the use of Levemir had a minimal effect on weight. Victoza’s approval for use alongside any basal insulin in the US follows the US approval of the GLP-1 agonist Byetta’s use with basal insulin Lantus last October (see new now next in diaTribe #37). In comparison to Byetta, Victoza offers the convenience of fewer injections (once per day vs. twice per day) and the freedom to use with any available basal insulin. To date, no trials have compared the effectiveness of Victoza and Byetta when used with a basal insulin, although some scientists have argued that shorter acting GLP-1 agonists (like Byetta) may offer greater effectiveness because of their greater effects on post-meal glucose levels. Nonetheless, this approval for Victoza is certainly exciting, and we expect reimbursement and access to this treatment option to improve in the months ahead.

Finally, even further down the road, we also heard an update from Sanofi and Zealand Pharma on their novel pen device that will allow users to inject both Lyxumia (the companies’ once-daily GLP-1 agonist) and Lantus at the same time, eliminating one extra shot per day. Notably, the companies announced that their pen device will allow users to adjust their Lantus dose while receiving the same dose of Lyxumia every time. The device is currently under development, and Sanofi has indicated that trials will begin in early 2013. If all goes well, the device could become available as early as late 2014. Meanwhile, Novo Nordisk is taking an alternative approach to its combination GLP-1 agonist/basal insulin pen device. Instead of allowing users to adjust their insulin dose separately from their GLP-1 dose, the drugs (Victoza and the company’s latest basal insulin called degludec) will always be injected together at a fixed ratio to one another. In other words, if a user reduces the amount of degludec they wish to inject, the amount of Victoza they will receive will be reduced as well. Novo Nordisk has indicated that this approach will still allow over 80% of people to receive the right amount of basal insulin and enough Victoza to be effective in the body. Two phase two trials for this device are underway, which are expected to complete in the second half of this year. Assuming the trials complete as expected, approval may be possible as early as the end of 2013. –BK