The Future of Rapid-Acting Insulin Treatments in Diabetes Care 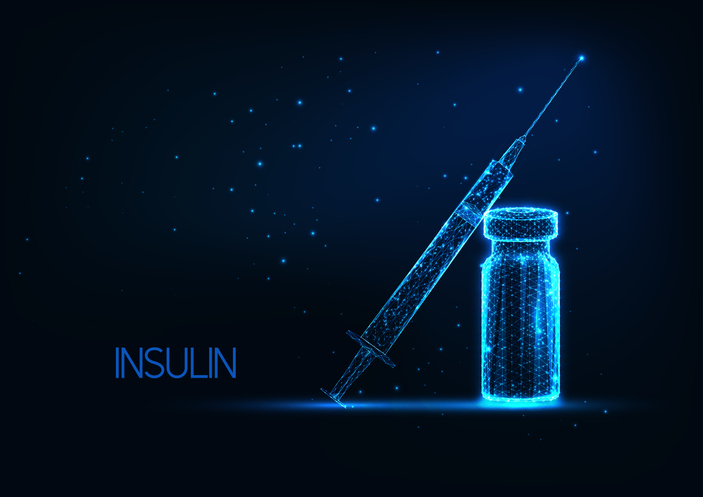 Researchers are dedicated to developing new mealtime insulins that can help improve glucose management and prevent highs and lows. Exciting new concentrated, ultra-rapid acting insulins are coming down the pipeline that may lead to more rapid glucose lowering after meals.

Currently available rapid-acting insulins don’t act as quickly as insulin produced by a healthy pancreas. This places people with diabetes at a greater risk for both highs and lows following a meal.

On May 26, 2022, leaders in diabetes care and insulin development gathered to discuss the future of concentrated insulins at a webinar on “The Need for Concentrated and Rapid Acting Insulin Treatments in Diabetes Care.” During the session, experts discussed trial results on a new concentrated insulin in development, based on data first presented at the Advanced Technologies and Treatments (ATTD) diabetes conference in Barcelona earlier this year.

This new insulin, developed by Arecor, is a more concentrated version of insulin aspart (Novolog) currently named AT-278. While regular insulin aspart has a concentration of U100, AT-278 is five times greater at U500. AT-278 was specifically designed to maintain the ultra-rapid acting properties of insulin aspart while lowering the overall volume of insulin that needs to be injected. This can be especially important for people with high daily insulin requirements, particularly people with type 2 diabetes.

Dr. Thomas Pieber, professor of medicine and head of the Division of Endocrinology and Diabetology at the Medical University of Graz in Austria, discussed data from an early clinical trial on AT-278, showing that AT-278 worked faster to lower glucose levels when compared to a standard post-meal insulin treatment of non-concentrated insulin aspart. 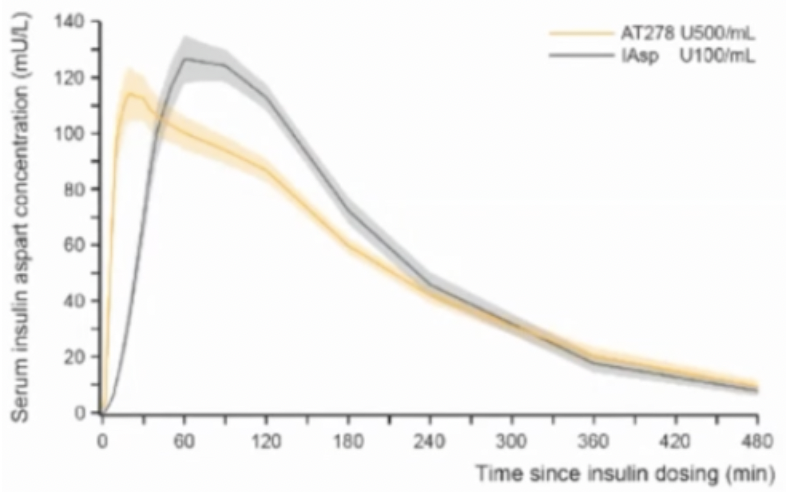 As shown in the chart to the right, AT278 (orange) was absorbed into the bloodstream significantly quicker than the U100 insulin (grey). AT278 was detected in the blood only three minutes after dosing, compared to 9.5 minutes for U100. In terms of lowering glucose activity, AT278 started working an average of ten minutes quicker than the U100 (11.5 minutes compared to 21.5 minutes).  This early phase 1 trial with 76 participants demonstrates that AT-278 may improve post-meal glucose management significantly. “Despite the higher concentration of 500U/mL, AT278 maintained the rapid acting properties of insulin aspart,” said Pieber. “Thus, this new insulin preparation has the potential to improve blood glucose management and convenience for people with high insulin needs.”

Much work still needs to be done for AT278 to be approved for use, however, researchers continue to talk about these exciting possibilities for better insulin formulations. On July 4th, 2022, Arecor announced that the company will be presenting these trial results at the European Association for the Study of Diabetes (EASD) annual conference on September 20th in Stockholm, Sweden. diaTribe will be attending this conference along with more than 15,000 healthcare providers, industry leaders, and people with diabetes, following the latest updates to AT278 and other concentrated insulin formulations in development.