GLP is the 1 For Me: Recent Literature Shows Promising New Formulations of GLP-1 on the Horizon 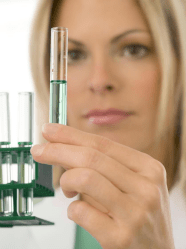 Byetta has been the first of a relatively new class of diabetes drugs called “incretin mimetics” or “GLP-1 analogs.” GLP-1 is a gastrointestinal hormone, or “incretin,” which is released in the body during meals to enhance the insulin response to the new glucose load. We discovered several years ago that GLP-1 does not merely help the insulin release but actually caused about 70% of it. Without enough GLP-1 in the body, insulin response becomes a trickle instead of the aggressive spike it is meant to be. When they eat food, non-diabetics experience a spike in insulin followed by a more mild release, but type 2 diabetics miss this initial spike (or what is sometimes called a “first-phase insulin response”) altogether. It turns out that just as insulin is deficient in the body of a type 2, so is GLP-1, but it’s unclear why. GLP-1 analogs are a means of providing GLP-1 to people with type 2 diabetes who are deficient in that hormone.

Byetta is manufactured by Amylin Pharmaceuticals, and to its success, other drug companies have spent considerable sums to develop similar products to create higher levels of GLP-1. These include DPP-4 inhibitors, drugs that temporarily disable DPP-4, the enzyme that normally breaks down the body’s natural GLP-1 almost as soon as it is released. These tend to be less potent: rather than introducing a surge of artificial GLP-1, they only work with what the body is already making – sometimes not much. On the other hand, their mildness creates less nausea, a side effect associated with Byetta. They are also in pill form, which, for some people, is much more attractive than the two injections per day Byetta requires. The goal is to create an effective drug that causes little or no nausea and requires few or no injections.

Two papers appeared this summer in the medical journal Diabetes Care showing the success of two new GLP-1 analogs on the horizon: “exenatide LAR” and “liraglutide.” Exenatide LAR is a Long-Acting-Release version of Byetta (also known as exenatide) and is also made by Amylin Pharmaceuticals. LAR requires injections only once per week, instead of twice a day. Liraglutide is Novo Nordisk’s version of the GLP-1 analog. It requires one injection per day but has other potential benefits. Both are expected to be even more effective than Byetta. This is partially because they provide full coverage; in other words, they’re working in your body 24 hours per day. Two injections per day of Byetta only cover you for about 16 hours, which means the rest of the time you’re not getting the benefits of GLP-1. For this reason, some doctors recommend taking three injections per day of Byetta even though the “label” says two shots.

The LAR study, by Dr. Dennis Kim and colleagues from Amylin and Eli Lilly, showed promising A1c, nausea, and weight loss results. They suggest that LAR may well compare quite favorably to Byetta – in fact, be superior across all fronts – a comparison currently being studied, the results of which should be announced toward the end of 2007. The phase 2 study was done in subjects with type 2 diabetes who were either taking metformin or were not on medication. It turned out that the amount of exenatide in subjects’ bodies on LAR was the same as the maximum amount after one injection of Byetta. This suggests that the long-acting release formulation does successfully extend the action of the drug. Starting from an average A1c of 8.3%, the average A1c was decreased to 6.6% (while the A1c of those not taking LAR, who were on placebo, rose a bit). Subjects on LAR also lost 3.5% of body weight (which came out to about eight and a half pounds), and this was only after 15 weeks and it’s expected they would lose even more over time. Though the trial did not include a direct comparison with normal Byetta (some call this “Byetta Classic”), there seems to be significantly less nausea associated with LAR.

The liraglutide study, by Dr. Tina Vilsboll and colleagues from Gentofte hospital in Denmark and Novo Nordisk, also showed promising results over its 15 weeks. A1c fell from 8.5% to 7.05% and weight fell a substantial 4%. There was a relatively low incidence of nausea, and we understand that these benefits appear to be holding true in the larger trials now running. Liraglutide requires one injection per day, but it has some potential benefits over LAR: it will likely use a smaller-gauge (thinner) needle and is closer in form to natural GLP-1. It’s unclear yet whether the latter “benefit” is actually a benefit. Because Byetta and LAR are different enough to natural GLP-1, the body produces antibodies to them. So far, these antibodies seem to have no clinical effects. In general, we don’t know yet how these two drugs compare in nausea, impact on A1c, and weight. For this we need a straight head-to-head study. This comparison will be important in choosing one drug over the other. We understand that Novo Nordisk’s initial strategy will be to position liraglutide as an early alternative to insulin therapy in patients failing combination oral agents, but we think it likely that an indication for initial therapy after diagnosis is also in the works. Overall, we think that positive efficacy data from a second drug in the GLP-1 analog class of diabetes therapeutics is an excellent sign for the class.

Liraglutide and LAR are both expected to be available around 2009. To read the original studies, see the following: