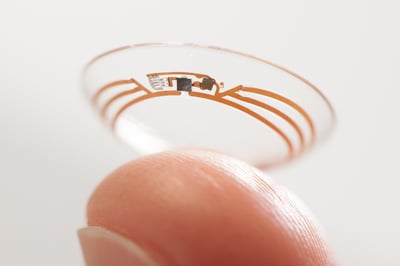 Google recently received a patent for its glucose-sensing contact lens, providing the first major update we’ve heard on this project since last July. The patent does not necessarily reflect Google’s latest or final design of the glucose-sensing lens, but it does indicate continued work and interest in the project – a major positive for patients! Here’s what we learned from the patent (filed in November, approved in March):

From a convenience perspective alone, a glucose-sensing contact lens powered by clothing/jewelry/glasses could offer a major win for patients – potentially no need to carry around an extra device, significant discretion, and high “cool factor.” Of course, there are still challenges to overcome, such as accuracy and reliability, not to mention cost and manufacturing.

Google initially announced work on a glucose-monitoring contact lens last January. Novartis partnered with Google in July 2014 to help make the idea a reality, bringing previous expertise from its major eye care division, Alcon. While Novartis initially hoped to have a full prototype of the lens completed by early 2015, the project has been kept quiet over the past 10 months until this recent update. We’re not sure of the latest timeline on a prototype, but the patent makes us optimistic that the companies are still working on making this idea a reality. –VI/AJW