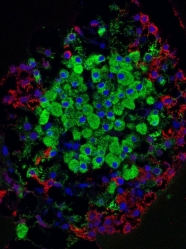 Dr. Doug Melton and colleagues at the Harvard Stem Cell Institute recently announced new partnerships with Novartis and AstraZeneca to advance stem cell research for type 1 diabetes. Dr. Melton’s team made waves last October after discovering a novel method to generate insulin-producing cells from stem cells, which in theory could be implanted into people with type 1 diabetes. To take this research further, Dr. Melton has since co-founded Semma Therapeutics, a start-up aimed at bringing his lab’s work in mice to humans that recently raised $44 million from investors (quite impressive!). The Novartis and Astra Zeneca partnerships are major steps towards bringing this work to humans; see what they are trying to do below:

Dr. Melton’s lab is not the only group making progress on stem cell research. Both ViaCyte and BetaLogics have developed their own methods for creating insulin-producing cells from stem cells. Of the three groups, ViaCyte is the farthest along, having already begun clinical trials in humans. Even so, ViaCyte has suggested that its treatment would reach the FDA for approval in 2019 or 2020 at the earliest, and a lot must go right for that to happen. While there is still a long, long way to go until these treatments could reach patients, if successful, they could potentially revolutionize the treatment of type 1 diabetes and potentially provide insights into type 2 diabetes as well. –AJW/ER/KC