How can we build healthier cities? What city needs the most help? Plus a reader poll! 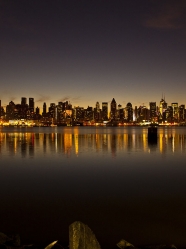 Twitter summary: How can we build healthier cities? Novo Nordisk tackles the challenge with an innovative new program. Plus, a reader poll!

Short summary: 64% of the 342 million people with diabetes globally now live in cities. As more people move into cities and the rates of diabetes increase, how can we learn how to build healthier cities? Novo Nordisk aims to do just that by launching what looks to be a very cool and smart “Cities Changing Diabetes” program. Read on for the considerations we believe will be the most important for cities to be able to impact people with diabetes and a reader poll of which city would be your top pick!

Fifty percent of the world’s population, or around 3.6 billion individuals, live in cities, and by 2050, it is estimated that the number will rise to 70% of the global population. So how are our cities doing from a health perspective? Unfortunately, a disproportionately high percentage (64%) of the 342 million people with diabetes live in cities. Of course, this is not to say that type 2 diabetes prevention should focus solely on cities, as it is a severe problem in rural areas as well. However, as both urbanization and the incidence of type 2 diabetes are on the rise, cities are increasingly being looked at as a part of the global diabetes pandemic. It is important to consider why this is the case, and how we can take steps to build healthier cities.

While movements toward cities have long been considered a marker of prosperity due to increased job opportunities and easier access to healthcare and educational resources found in urban areas, the development of cities may also be contributing to the increased prevalence of type 2 diabetes. Drastic lifestyle changes associated with urbanization have led to the rise of unhealthier lifestyles and increased type 2 diabetes. City design in the past half century has largely centered on cars, allowing people to commute from the suburbs instead of walking or taking public transit. Additionally, people who live in cities are more likely to have sedentary office-based jobs. As a result of these two factors, the opportunities for residents of cities to engage in enough physical activity are relatively low. Maintaining a healthy eating plan in cities can also be challenging because of the easy access to fast food restaurants and convenience shops, as well as the decreased availability of fresh produce. Although it might appear on the surface that decisions concerning eating and exercise are a matter of personal choice, they are greatly influenced by the structure and culture of our surrounding environment.

If cities are playing a role in the increase of type 2 diabetes, can they also be part of the solution? Based upon the wide disparity in diabetes prevalence throughout the United States and around the world, there seems to be a connection between a city’s infrastructure and policies and the incidence of tye 2 diabetes and obesity. Though comparisons are usually made between states, cities too display wide differences in diabetes rates like San Antonio, which boasts a 12.7% rate of diabetes, more than double the 6.7% diabetes rate found in Denver.

Although the factors that lead to increased type 2 diabetes rates in certain cities are complex, some smart policies can certainly make some urban areas healthier than others. A major factor in a city’s role in public health is transportation infrastructure. Over the past ten years, cities like Seattle and Denver have significantly upgraded their bicycle infrastructure by dedicating lanes on major roads to bicycles, helping cyclists take back the roads from the dominance of cars. Well-developed public transportation systems encourage individuals to use their cars less and to walk more. The availability of recreational facilities through parks is another factor built into a city’s blueprint that can also have a positive impact on individuals’ average daily physical activity, especially for children (who are a key target in efforts to prevent future cases of type 2 diabetes and obesity).

Cities are also excellent laboratories for policy initiatives to improve public health. Places such as Mexico City have tried to discourage the purchase of sugary soft drinks by imposing a soda tax. Other cities are exploring ways to make healthy foods both more affordable and more accessible to populations that live in “food deserts,” or areas where fresh fruits and vegetables are not readily available. The past few decades have seen an explosion in urban farms and gardens, which help move sources for fresh produce closer to the urban populations that have the least access to healthy food. Promoting physical education in schools and preserving recess would be other ways to help future generations be healthier. However, while local initiatives have demonstrated some success, broader initiatives are needed to combat the urban diabetes epidemic on a global scale.

In collaboration with the University College of London, one of the foremost research institutions on the impact of the built environment on human health, and the Steno Diabetes Center in Denmark, Novo Nordisk is pioneering the Cities Changing Diabetes initiative. This program seeks to combat urban diabetes through study of selected focus cities. Novo Nordisk hopes to identify the unique challenges that cities present and develop solutions for combating type 2 diabetes that can then be replicated elsewhere. Once the company creates agreements with partner cities, it will conduct a period of observation, to learn more about urban diabetes, share best practices, and begin policy conversations. As more people move to cities, the importance of addressing the relationship between type 2 diabetes and urban lifestyles lies not just in making people healthier today, but also in laying the proper groundwork for the future.

With its launch on March 28, the Cities Changing Diabetes initiative announced the partnership with its first regional urban center, Mexico City. Aside from being one of the most populated metropolitan areas in the world, Mexico City, according to the Mexican Minister of Health Dr. Armando Ahued Ortega, views type 2 diabetes as its most significant health problem, making it ideal for this urban experiment. The leaders of the Cities Changing Diabetes program plan to work with additional partner cities in Asia, Europe and North America. Those who are interested in learning more about Cities Changing Diabetes should check out the program’s gripping 75-second introductory YouTube video.

Which cities would be the most promising partners for the “Cities Changing Diabetes” program with Novo Nordisk? The team at diaTribe brainstormed some ideas on what makes a city healthy, how they could change diabetes, and our top picks on future partners.

What makes a city ready to change diabetes?

Our list is highly speculative, and is intended primary as a starting point for consideration and discussion of the factors that are important for healthy cities. Although we have mentioned a few contenders for the spot as Novo Nordisk’s US partner city, the decision has not yet been announced. What do you think? Vote below for the city you think has the most potential to change diabetes. But don’t stop there – although the Cities Changing Diabetes program will only be able to select one program in the US to begin with, every city in America faces a diabetes problem that can only be solved with active public engagement. You can communicate with your government representatives to advocate for more walkable cities, better access to healthy food, health education programs for center-city schools, and other important programs that can help ensure that the cities of tomorrow are healthy places for future generations.