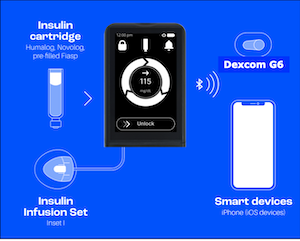 The iLet Bionic Pancreas system uses a tubed insulin pump that is roughly the size of a credit card and which houses the AID algorithm, a Dexcom G6, and a smartphone or other device. It is worn similar to other AID devices, with the pump attaching on the abdomen and the Dexcom G6 being worn on the back of the upper arm or on the abdomen.

One of the things that makes the iLet Bionic Pancreas so unique is the minimal input required from the user. All that is needed is the user's weight when they first initiate the device and then adjustments for glucose target (usual, lower, or higher) and the meal type (breakfast, lunch, or dinner) and size (usual for me, less, or more). All insulin dosing is then determined by the device's algorithm using this information.

The pivotal trial is part of the data being submitted to the FDA to try and obtain clearance for the device to make it available for people with diabetes. As of right now, the system is only available for investigational use (like in a clinical trial).

What did the pivotal trial for the iLet Bionic Pancreas show?

Dr. Gregory Forlenza, associate professor of Pediatrics at Barbara Davis Center for Diabetes at the University of Colorado, began the presentation by outlining the design of this pivotal trial. There were 440 participants included (165 children and teens and 275 adults). The trial was relatively diverse, with almost 1 in 4 participants identifying as non-white. At the start of the trial, 88% of the participants were already using a continuous glucose monitor (CGM), and 31% were already on a hybrid closed-loop AID system.

The participants were randomly assigned into one of three different treatment groups:

“In children who are going to have a lifetime of diabetes, this is significant in reducing morbidity and mortality,” said Messer.

In adults and in the youth group, there was a greater improvement in those who started the trial at a higher A1C, and across almost all demographic breakdowns and insulin delivery systems the Bionic Pancreas outperformed the standard care group in reducing A1C. There were minimal severe adverse events in all groups – with only a few cases of severe hypoglycemia.

Initial Insulin Delivery breakdown of A1C reductions in the adult group using bionic pancreas with Humalog/Novolog. For those who were initially on MDI, pump with no automation, or hybrid closed-loop and then switched to the bionic pancreas, there were significant reductions in A1C across the board – the greatest being an average of 1.0 percentage point drop in those who were initially on MDI.

Initial Insulin Delivery breakdown of A1C reductions in the youth group using bionic pancreas with Humalog/Novolog. For those who were initially on MDI, pump with no automation, or hybrid closed-loop and then switched to the bionic pancreas, there were significant reductions in A1C across the board – the greatest being an average of 1.0 percentage point drop in those who were initially on MDI.

These results are extremely impressive. The bionic pancreas showed significant improvements in A1C and Time in Range even when compared to people who were already on a hybrid closed-loop AID system such as Control-IQ or MiniMed 670G. It also included a relatively diverse group of participants across a wide age range and insulin delivery distribution – resembling more closely the general population than many other comparative AID trials.

Is this the only device that Beta Bionics is working on?

Beta Bionics is also currently testing the Bihormonal iLet Bionic Pancreas AID system to help people manage their diabetes. This system both monitors blood glucose levels and administers insulin and glucagon – a hormone from the pancreas that raises blood sugar levels. The hope with the dual hormones is that glucagon can be delivered during times when glucose levels are low in order to stabilize them without user interaction, eliminating the need for carbs.

You can read more about these results in our preliminary coverage of this trial from the ATTD 2022 conference.