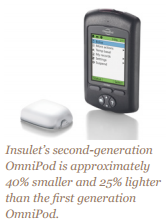 Insulet recently announced that its second-generation OmniPod had received approval in Europe. Compared to the first-generation OmniPod, the new pod is approximately 40% smaller and 25% lighter – wow! Insulet will launch this second-gen pod in select European countries later this year, and Insulet remains hopeful for a US approval by the end of 2011. At EASD, we had the opportunity to see the new OmniPod for the first time. Overall, we were extremely impressed with how much smaller and thinner it was, while still holding just as much insulin - 200 units. Although we haven’t yet tested the new product, based on its size and weight alone, we believe it could expand Insulet’s market share and maybe even bring new pumpers into the fold. Anything that makes technology less intrusive – or, in this case, less bulky – has that potential. Insulet and Dexcom are also continuing to work on an integrated pump/CGM product that will use the second-generation OmniPod and Dexcom’s fourth-generation sensor. The companies are aiming to submit the product to the FDA in the first half of 2012, placing a possible approval date in late 2012. While we are disappointed this was delayed (see our NewNowNext in diaTribe issue #29), we are happy that the integrated product will have both the most updated sensor as well as newest pod. --AB/KC