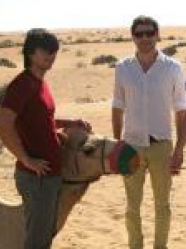 This past December, diaTribe journeyed to Dubai, United Arab Emirates, to attend the International Diabetes Federation’s (IDF) 21st World Congress. Once every two years, this meeting convenes healthcare professionals, policymakers, diabetes advocates, and researchers from around the world to discuss current challenges in diabetes care from a global perspective, blending the latest in research with developing trends in public health. In hopes of addressing the startling increases in diabetes predicted in the region in the coming years, 2012 marked the first time that the Congress was held in the IDF’s Middle East and North Africa Region, which includes six of the world’s top 10 countries for diabetes prevalence – where an alarming one out of five adults has diabetes. Here are some of the highlights.

to the gym or the pharmacy?

With diabetes on the rise worldwide, many patients in developing countries struggle with limited access to proper healthcare – in addition to delays in diagnoses, medications may be unavailable or too expensive. So presenters at the World Congress spent considerable time discussing new efforts to promote healthy lifestyle change. In particular, Paul Sacher (University College London’s Institute of Child Health, London, United Kingdom) presented data from the United Kingdom’s MEND program, a family-based, childhood obesity intervention being delivered at over 300 locations nationwide. Results suggested a strong decline in Body Mass Index (BMI) and waist circumference over two years among the children participating, as well as increases in physical activities and declines in sedentary activities. The intervention also proved cost effective, with the potential for a 10-13 fold return on investment – given the challenges large-scale lifestyle interventions such as MEND have faced in the past, both in effectiveness and political feasibility, we certainly appreciated such positive results.

However, despite this nod to diet and exercise, we were surprised to see the increased use of pharmaceuticals and surgery for type 2 diabetes and obesity. In his headliner debate with Dr. Jaako Tuomilehto (University of Helsinki), entitled “Early Intervention to Prevent Diabetes Must Include Medication,” renowned physician Dr. Ralph DeFronzo (University of Health Science Center, San Antonio, TX) summed up his position resoundingly: “The answer is simple: non-pharmacologic therapy (diet plus exercise) DOES NOT WORK on a long-term basis.” Dr. DeFronzo supported the use of DPP-4 inhibitors (e.g., Merck’s Januvia), GLP-1 analogs (e.g., Amylin’s Byetta and Novo Nordisk’s Victoza), and low-doses of Takeda’s Actos in people at risk for developing diabetes (“prediabetes”). Dr. Tuomilehto disagreed, arguing that the focus should be on earlier use of medication in individuals with established diabetes. He believes such efforts will help prevent long-term complications.

Similarly, on the obesity front, Dr. Luc Van Gaal (Antwerp University Hospital, Antwerp, Belgium) argued that medication would need to play an important role in addressing the obesity epidemic, given the high numbers of individuals affected – particularly, he voiced support for Vivus’ Qnexa (which also showed continued benefits in new data presented at the Congress, including excess weight loss at the full-dose similar to that observed in two bariatric surgery studies). Qnexa is currently under review at the FDA (see New Now Next in this issue). Dr. Francesco Rubino (Weill Cornell Medical College, New York) took this one step further, arguing for the wider use of bariatric surgery. He called the procedure “the most high impact discovery in diabetes since the discovery of insulin” and posed, “If a pill or shot could control glycemia, body weight, improve lipids, blood pressure, and increase survival, would it be acceptable that over 99% of patients do not have access to that treatment?” While it’s unclear if this increasing focus on pharmaceuticals and bariatric surgery was an anomaly or a herald of things to come, we still see diet and exercise as the most cost-effective and side-effect-free method to tackle obesity, and we hope that research into lifestyle change continues to be funded.

With diabetes prevalence on such an astronomic rise, there is a clear onus on policymakers to enact measures aimed at curbing the rates of diabetes. While the condition has become a topic of interest for leaders worldwide, consensus from the World Congress suggested the road ahead could be challenging. Coming off the recent United Nations Summit on Non-Communicable Diseases held in September 2011 in New York, many at IDF felt that too little was agreed upon and that intense follow-up would be required. IDF President Dr. Jean Claude Mbanya said that he was “so disappointed [at the summit] when issues of human interest and life and death were considered behind politics.” IDF CEO Dr. Ann Keeling instead aimed her criticism at the World Health Organization, which did not shift resources after the Summit and still has only one person who works specifically on diabetes in its Geneva headquarters of 3,000 people. Looking ahead, they emphasized the need to frame the diabetes epidemic in terms of social injustice, likening it to the feminist movement, the civil rights movement, and the fight against AIDS.

Of course, these movements were not an easy government fix, just as tackling diabetes will not be. As Dr. Paul Zimmet (Baker IDI Heart and Diabetes Institute, Melbourne, Australia) put it, “We have some very simplistic people who think if you ban television advertising and Coca-Cola and some of these other things, you’re going to solve obesity.” However, we look forward to hearing more about new measures being put forth by IDF, including the Federation’s Global Diabetes Plan 2011-2021, discussed at the Congress. While the details of the plan are still unclear, it aims to hone the key pillars of diabetes care systems for simple implementation by community health workers and non-diabetologists – clearly a smart move given the wide prevalence of diabetes and the lack of diabetes specialists in many countries. –EC