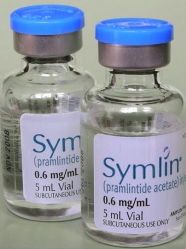 If you have diabetes, you already know that your pancreas has difficulty producing insulin. What you may not know is that your pancreas also has trouble producing another hormone, called amylin, which also plays a role in regulating blood sugar. Amylin is insulin's less well-known cousin, but it is now stepping out of the shadows with the availability of a new amylin-type product on the market.

Called Symlin (pramlintide), this drug is actually a synthetic derivative of amylin and, like insulin, works to replace or supplement amylin in the body. Symlin has proven to be quite controversial so far, with patients claiming side effects that range from a "post-sex buzz" to intense initial nausea. I am always excited to learn about new therapies and was among the first try this one. Three years ago, when the product was still being tested, I enrolled in a six-month clinical trial for Symlin.

Symlin was approved for people with type 1 and type 2 diabetes in March 2005 (my trial was part of the approval process) and is manufactured by Amylin Pharmaceuticals (which is currently riding high on the success of Byetta, which we covered in last month's Learning Curve). I had heard some good things about Symlin, namely, that it helped lower post-prandial blood glucose levels. Mine are always too high, which has been very frustrating. Although my A1c has long been around 6.5%, I had always suspected that many of my hypoglycemic experiences stemmed from correcting high blood sugars (especially post meal), and those lows, rather than actually good control, were what kept my A1c scores low. It made sense to me that the "quality of A1c" should be considered as well as the numerical value, and mine didn't seem great, so I was looking for help. I had also heard that Symlin prompted some weight loss, which was intriguing.

Before I describe my experiences with Symlin, a bit of science: In people without diabetes, the same beta cells that make insulin also produce amylin. However, people with type 1 don't make either amylin or insulin because their beta cells have been destroyed. Amylin is usually released in conjunction with insulin - especially after eating - because it helps the body maintain flatter blood sugar profiles. It does this in three ways: by slowing gastric emptying (allowing sugar to enter the bloodstream more slowly), making people feel full more quickly and thus eat less, and inhibiting post-meal secretion of glucagon, a hormone that makes the liver release extra sugar into the bloodstream.

Like insulin, Symlin is an injected drug, but while different types of insulin have different peak effects and timing of dosage, Symlin is specifically designed to affect glucose levels after eating - which is why it is taken only before meals containing at least 30 carbs or 250 calories. Thus, during the clinical trial I took Symlin at each meal along with my insulin. It looks a lot like insulin (but in a much smaller bottle) and is handled in much the same way. The FDA advises you not to mix insulin and Symlin, so I took a separate shot alongside my pre-meal insulin pump boluses. Over the years, I have become better at taking my boluses at least 15 minutes before eating, and I found that leaving some time between Symlin and eating also worked well because I felt full earlier in the meal.

I also tried using Symlin in a pump, which worked fine. However, wearing two pumps (and a continuous glucose monitor) took up a bit too much real estate, so I eventually went back to taking Symlin shots. While I was pumping it, though, Symlin worked extraordinarily well and my blood glucose was actually significantly more predictable than with just shots. Plus, I lost an extra two pounds. I'm not sure if this was a direct effect or not, but I wish pumps with two reservoirs were available!

Dosing was a little complicated. At first I took a fixed dose of Symlin for each meal and cut back my bolus insulin by 50%, just as the manufacturer instructs. But this proved too steep a reduction, and my blood glucose went too high. After adjustments, I figured out that I actually only needed to reduce my insulin by about 25%. Alternately, I could not reduce my insulin at all, but just "extend" it by delivering small boluses with the insulin pump over 3-4 hours. Using these tactics, I was able to titrate doses of Symlin and insulin to my control post-prandial blood sugar.

I remember getting some real rushes as I learned how to use Symlin. I would have 40-50 carbs (eight or nine sushi rolls, plus a beer!), check an hour after eating, and my meter would say 110-120 mg/dL (6.1-6.6 mmol/L). What a result! I had pretty much given up eating sushi before Symlin. Once I figured out the dosing, I could reliably reduce blood glucose scores one hour after meals by 50 mg/dL (2.8 mmol/L) or more, compared to what my pre-Symlin score would have been.

After working hard on my dosing, I did see some reductions in hypoglycemia - mainly because I wasn't chasing after-meal highs and then accidentally going too low (the "roller coaster'' effect). But initially, I actually had more lows because the combination of Symlin plus fast-acting insulin reduced my blood glucose very quickly. I could go down by 50 mg/dl (2.8 mmol/L) in less than 15 minutes! This improved after I realized that if I spread out my bolus (using the square wave or extended bolus function on my pump), I could match the action of insulin and Symlin better. I also knew some people who adopted the strategy of taking insulin after they ate, so they would already know how much their appetite had been reduced.

I was thrilled to have better post-prandial control and so was my family - the lows tend to be harder on them than me. Although A1c is the 'gold standard' of glycemic control, it is just an average, and I strongly believe in the work of Dr. Irl Hirsch of the University of Washington (see our interview in Dialogue) and Dr. Michael Brownlee of the Albert Einstein School of Medicine, who maintain that it's also critical to minimize the range of deviations from normal blood sugar. (These deviations may put patients at greater risk for complications.) During the Symlin trial, my A1c went from 6.6% to 6.2%. I was hooked, especially to the flexibility I now had to eat more carbs without driving up my after-meal blood sugars.

After I stopped taking Symlin (I got pregnant, and it's not approved for use in pregnancy, which I hope changes1 ), my A1c quickly bounced back to 6.6% again, which I think means that Symlin was responsible for improving my control. But this was only secondary. The real point was that after I got over the nausea, I felt so much better on Symlin and missed it noticeably once it was gone.

We note that the FDA does not recommend Symlin for people with A1c above 9%. They don't specify why, but we assume it's because they think patients with A1cs above 9% aren't responsible enough to take the drug. We disagree. Symlin can help anyone who knows how to use it.

What about weight loss? Well, it happened for me. Studies show that patients on Symlin lose about 5 lbs (2.3 kg) on average after one year. In my case, I lost 6 pounds (more than 5% of my body weight) in only six months, which was pretty exciting, even if weight loss wasn't one of my specific goals. Anecdotally, we've heard stories of patients who lose much more weight on Symlin. That is probably why Amylin is now conducting clinical trials testing Symlin as an obesity drug for the general population.

Will people without diabetes take daily shots to lose weight and keep it off? We think so, especially because they tend not to experience the nausea that affects diabetes patients. Generally, type 2 patients also seem to experience less nausea than type 1 patients. As we understand it, this is because they do still produce both insulin and amylin, while type 1 patients don't produce either, so the introduction of pramlintide is a bit more of a shock (albeit temporary) to the system. I didn't like the nausea but I did appreciate that my body was getting something it was supposed to be producing anyway.

Nausea is a commonly reported side effect for Symlin, though it disappears after awhile. In my case, I would get queasy - mild nausea - about five minutes after I took it and the discomfort would last for 10-15 minutes. This happened pretty consistently for about 10 weeks before it wore off. It wasn't much fun, but I was never sick enough to actually vomit. I was in a trial so I persevered with my three shots a day, although I have to admit, I did feel like quitting more than once. I am glad I didn't because the nausea did eventually disappear. The initial nausea was accompanied by a loss of appetite, but this did not wear off and was presumably what caused my weight loss. While some people think nausea causes the weight loss, I disagree because even after my nausea wore off, the weight stayed off. The clinical data show that people who never had nausea at all still lost weight. Some people also have a hard time distinguishing between nausea and satiety because it has been so long since they ever felt "full." For me the increased satiety just meant feeling less hungry halfway through my meals, but it was a new feeling for me, and one that has probably helped overall.

I also experienced a "feel-good" effect after eating, which I first noticed when the nausea began to wear off. I felt better overall and definitely noticed when I forgot my Symlin at home. This made giving up the drug even harder. One person we interviewed who has talked to many Symlin patients said it was a common side effect for about a third of the people, sometimes described as a "post-sex buzz." That made me smile. I wouldn't have described it that way, but I have to admit, I found myself nodding. I think part of this is the effect of having smoother blood glucose profiles, but part of it is also a direct effect of the drug on the brain.

Symlin costs about $120/month - more expensive than insulin, but not excessively so - and is covered by my health insurance. As I understand it, about 80% of insurers cover it, so coverage is quite good, though not as good as for insulin. We hope the coverage continues to improve. In the meantime, if your insurer doesn't cover it, we think you should ask your doctor to write a special request. The more tools we have to help us improve our physiology, the better off we'll be.

Our verdict on Symlin: Fabulous-Though-Can-Be-Difficult-At-First. "Fabulous" because it really helps improve blood glucose, lower weight, and make people feel better - and who doesn't want that? "Difficult" because it requires some titration of both Symlin and insulin dosing. You may have some issues with nausea at first, and you may need to talk your doctor into prescribing it, but I am certainly going back on Symlin as soon as I can. For sure, two or three more shots a day can be a hassle, but seeing excellent blood sugar scores only an hour after eating (and having flexibility to eat more carbs) is truly sublime. Plus, the FDA is now reviewing a pen device for Symlin that will hopefully be approved for use soon. Stay tuned to our new column "new-now-next", where we'll update you on this as soon as there's news!

1 In pregnancy, keeping blood sugars as tight as possible is very important. Dr. Lois Jovanovic, a member of our advisory board, has written extensively about this. They recommend an A1c of 5.0 — 5.5. when planning pregnancy — I didn't achieve this but think that Symlin would have definitely helped!