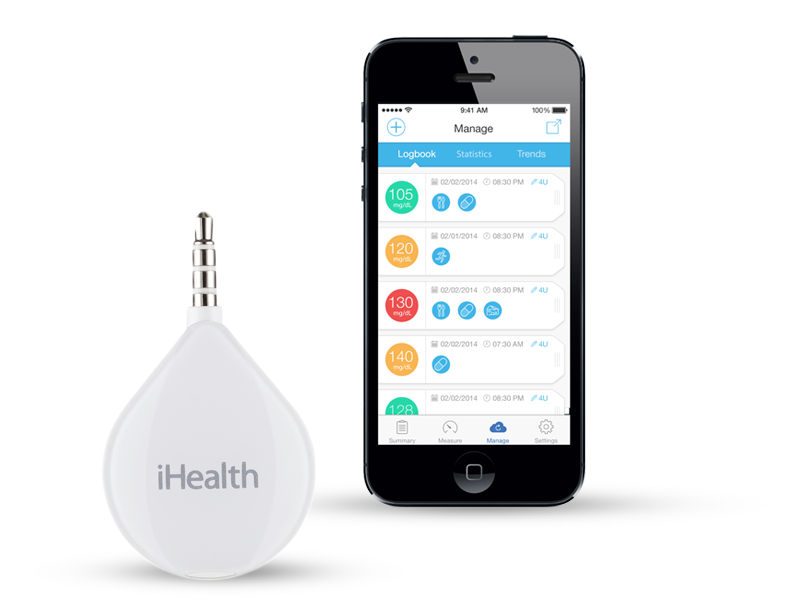 On June 12, iHealth Lab announced the launch of the Align blood glucose meter, a very small device that plugs directly into the headphone jack of an Apple iOS- or Android-compatible smartphone. The meter does not have a screen but instead displays and stores the blood glucose results directly within a free app, iHealth Gluco-Smart. The app itself has a colorful four-screen user interface that makes it easy to see recent results, tag them (e.g., before/after meal, exercise, etc.), and view statistics and charts. All the information can also be emailed straight from the app, which should help many patients share recent results with healthcare providers. We felt the design could use some improvement (e.g., takes a bit of time to load, some of the settings and tagging is not particularly intuitive), but it is fairly user friendly overall.

Perhaps the most notable feature of the iHealth Align is its affordability: the meter with lancing device (which is cool and hip) costs just $16.95, and 50 strips are just $12.50. iHealth’s goal was to make the strips inexpensive enough that users can pay for them out of pocket, especially since insurance reimbursement is not currently available. Both the Align device and its test strips are available for sale on the company’s website and eventually on Walgreens.com. iHealth also offers a wireless smart glucose monitoring system that works with Bluetooth – you can read our update on this device here.

Since the meter must have a smartphone to work, all data is automatically stored on the phone and sent to an online account, an improvement over most other meters that typically rely on a cable and computer software for downloading. The one downside to this approach is that the meter will not work without a smartphone, so it’s only a good option for those who always have their smartphone around while testing. The small size and low price could make the Align particularly attractive for those desiring a few low-cost backup meters, or perhaps for use during exercise when carrying capacity is limited. – AJW/AB