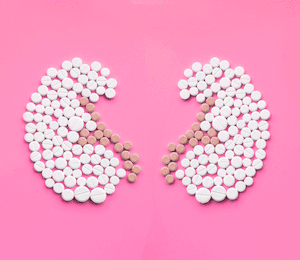 Early trial results found that SGLT-2 inhibitor Jardiance is highly effective at preventing and treating kidney disease in people with or without type 2 diabetes.

The drug manufacturers BI/Lilly announced that EMPA-KIDNEY, their phase III clinical trial evaluating the use of Jardiance (empagliflozin) to treat chronic kidney disease (CKD), will be stopped several months early due to positive results for trial participants who received the drug. This means the results were so positive that an independent committee decided it would be unethical to continue the study.

The trial looked at whether or not Jardiance could prevent the progression of kidney disease, cardiovascular death, or hospitalization for heart failure. The study also tracked hospitalizations and deaths from any cause across all participants.

EMPA-KIDNEY is the largest to date trial testing an SGLT-2 inhibitor in people with CKD. The trial has more than 6,600 participants, which included people with:

In 2018, the CREDENCE trial also ended early and led to an FDA approval when it showed that the SGLT-2 inhibitor Invokana protects against kidney disease in people with type 2 diabetes. Likewise in 2020, the DAPA-CKD trial was stopped early for showing that Farxiga prevents worsening of chronic kidney disease (CKD) in people with or without type 2 diabetes. People with type 1 diabetes were excluded from participating in both of these trials.

Initially, people with type 1 diabetes were included in EMPA-KIDNEY. At the beginning of the study, all participants were given information explaining the need to temporarily stop study treatment if unable to eat (e.g. if unwell or preparing for a medical procedure). Those with diabetes were provided with detailed information on how to recognize and minimize the risk of DKA (diabetic ketoacidosis). Additionally, those with type 1 diabetes were required to use a ketone meter and received guidance on when and how to use it.

Although no safety concerns were reported, during the course of the study people with type 1 diabetes ceased to be included at the request of BI/Lilly. By the end of the study, of the over 3,000 study participants who had diabetes, only 69 had type 1. If you have type 1 diabetes, talk to your healthcare provider about whether this treatment may be a safe option for you.

There are approximately 37 million people with CKD in the US alone, and about one in three people with diabetes will develop CKD in their lifetime. Given these strong results and the large unmet need that this drug could address, the FDA may grant a Priority Review to expedite Jardiance’s approval. Farxiga similarly received a Priority Review from the FDA based on the DAPA-CKD results.

These encouraging results follow other exciting news for Jardiance, including its recent FDA approval to treat all types of heart failure, regardless of heart failure type or diabetes status. The study also strengthens the evidence showing that SGLT-2 inhibitors should be used in the treatment of CKD.

The full results from the EMPA-KIDNEY trial will be presented at an upcoming medical conference. Given that other medications in this drug class have been shown to slow the progression of CKD in people with type 2 diabetes, researchers will continue to examine whether SGLT-2 inhibitors can prevent end-stage kidney disease, and if they are helpful for people who do not have diabetes. If the drugs have an impact on people with more severe CKD at the start, this may warrant a special, careful study in people with type 1 who have more advanced CKD.